The ARM Cortex A73 - Artemis Unveiled

It’s only been a little over a year since we had a good look into ARM’s Cortex A72 presented at ARM’s TechDay event in London. Over the span of this year we’ve seen various vendors not only announce SoCs with the new core IP but actually deliver devices in high volume. HiSilicon’s Kirin 950/955 definitely left a long-standing impression on the industry by providing incredible power efficiency gains while continuing to improve performance.

Fast-forward to 2016. Another year, another TechDay, this time from ARM’s brand-new offices in Austin Texas. So for today we have the pleasure to have a very deep look at ARM’s new Artemis CPU microarchitecture:

A Look Back At Recent History

The Cortex A73 is ARM’s new premium mobile CPU micro-architecture meant to succeed the Cortex A72 in consumer segments. Before we dive into details of the new CPU, it’s important to try understand and recap ARM’s CPU recent microarchitectures released the last few years. 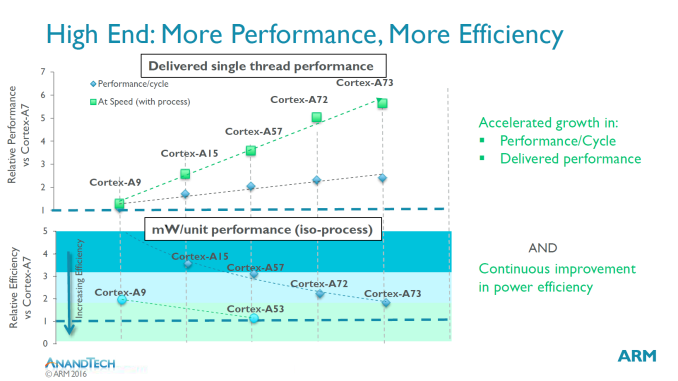 The Cortex A9 was an incredibly important design for ARM as, in my view, it provided the corner-stone for SoC and device vendors to create some of the designs that powered some of the most successful devices that brought with them a turning-point in smartphone performance and experience. Apple’s A5, Samsung’s Exynos 4210/4412, and TI OMAP4430/4460 were all SoCs which made the A9 a very successful CPU micro-architecture.

Following the Cortex A9 we saw the introduction of the Cortex A15. The core was a substantial jump in terms of performance as it provided the single largest IPC improvement in ARM’s Cortex A-profile of application processors. While the A15 represented a large performance boost, it came at significant cost in terms of power efficiency and overall power usage. It took some time for the Cortex A15 to establish itself in the mobile space as the first designs such as the Exynos 5250 and 5410 failed to impress due to bad power efficiency due to various issues.

It’s at this point where ARM introduced big.LITTLE with the argument that one can have the best of both worlds, a high-power performant core together with a low-power high-efficiency core. It was not until late 2014 and 2015 did we finally see some acceptable implementations of A15 big.LITTLE solutions such as the Kirin 920 or Exynos 5422.

The Cortex A57 succeeded the Cortex A15 and was ARM’s first “big” core to employ ARMv8 64-bit ISA. Accompanied by the high-efficiency Cortex A53 cores this represented an important shift not unlike the x86-64 introduction in the desktop PC space well over a decade before. The cores came at a moment where the industry was still at shock of Apple’s introduction of the A7 SoC and Cyclone CPU micro-architecture, beating ARM in terms delivering the first 64-bit ARMv8 silicon. Suddenly everybody in the industry was playing catch-up in trying to bring their own 64-bit products as it was seen as an absolutely required feature-check to remain competitive.

This pressured shift to 64-bit was in my view a crippling blow to many 2015’s SoCs as it forced vendors into employing sub-optimal Cortex A57 and A53 designs. HiSilicon and MediaTek saw an actual regression in performance as flagship SoCs such as the Kirin 930 and Helio X10 had to make due with only A53 cores for performance as they decided against employing A57 cores due to power consumption concerns. The Kirin 930 or the X10 were in effect slower chipsets than their predecessors. Only Samsung was fairly successful in releasing reasonable designs such as the Exynos 5433 and Exynos 7420 – yet these had respectively regressed or barely improved in terms of power efficiency when compared to mature Cortex A15 implementations such as the Exynos 5430. Then of course we had sort of a lost generation of devices due to Qualcomm’s unsuccessful Snapdragon 810 and 808 SoCs, a topic we’ll eventually revisit in our deep dive of the Snapdragon 820 and Exynos 8890.

Some readers will notice I left out the Cortex A12 and A17 – and I did that on purpose in trying to get to my point. The Cortex A12 was unveiled in July 2013 and presented as a successor to the Cortex A9. The core had a relatively short lifetime as it was quickly replaced within 6 months with the Cortex A17 in February 2014 which improved performance and also made the core big.LITTLE compatible with the Cortex A7. The Cortex A17 saw limited adoption in the mobile space. In fact, among the few SoCs such as Rockchip’s RK3288 and some little known chips such as HiSilicon’s Hi3536 multimedia SoC, it was only MediaTek’s MT6595 that saw moderate success in design wins such as Meizu’s MX4. 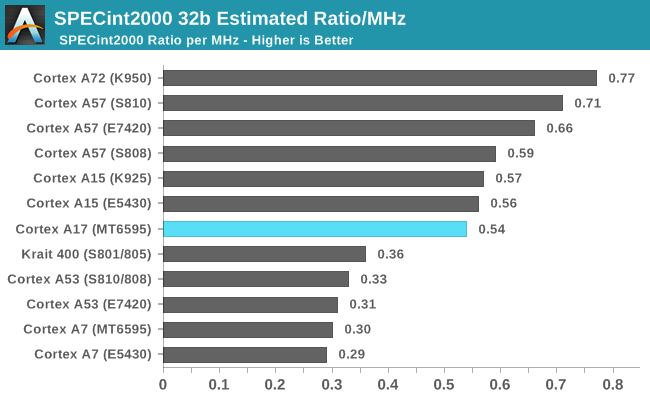 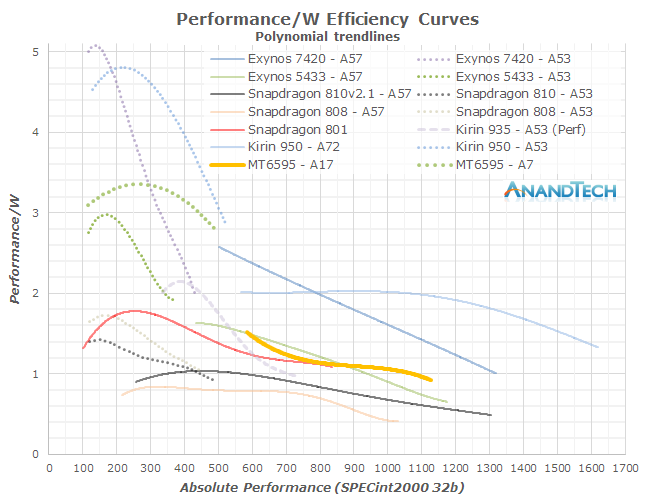 The MT6595 was actually an outstanding performer for its time delivering among the highest power efficiency while still providing excellent performance thanks to its 2.2GHz clock, all while competing with SoCs which had manufacturing node advantages. Unfortunately the Meizu MX4 suffered from some questionable hardware component choice and software decisions which ended up handicapping the device when it came to real-world battery life and performance.

The overall impression of the MT6595 left me asking myself how the device ecosystem would have evolved if vendors hadn’t insisted on moving onto the 64-bit architectures but rather had chosen to adopt A17-based designs. It looked like the A17 wouldn’t have had much issues in scaling in clock and power and would have represented the better alternative for flagship devices until the new A72 and FinFET manufacturing processes became available.

Introducing the Cortex A73

Having finished my tangent on my view of ARM’s microarchitecture history, it’s time to get to the main story today, and that’s the new Artemis microarchitecture used in the Cortex A73. As ARM releases more and more microarchitectures with product names that often don't represent the evolution of a given microarchitecutre, it can get complicated when talking about successors to certain designs. I reached out to ARM to see if there's a more fitting terminology when refering to designs that a clearly related to one-another, and in fact it seems there is. For example, the A15, A57, A72 all belong to the Austin family of microarchitectures, and as one would have guessed from the name, this is because they originated from ARM's Austin CPU design centre.

The A5, A7 and A53 belong to the Cambridge family while the Cortex A12, A17 and today's new A73 belong to the Sophia family, owning its name to the small city of Sophia-Antipolis which houses one of Europe's largest technology parks as well as ARM's French CPU design centre. Refering to their design location is however not enough to disambiguate microprocessor families, as we'll see completely new designs come out from each R&D center. In fact, this has already happened as the A12/17/73 can be seen as a new generation over the preceding the A9 microarchitecture and as such can be referred to as a "second generation Sophia family". This is an important notion to consider as in the future we'll be seeing completely new microarchitectures come out of ARM's various design teams.

The Cortex A73 being still in the same Sophia family effectively means the design is very much a 64-bit successor to the Cortex A17. The new core effectively inherits some of the main characteristics of its predecessor such as overall µarch philosophy as well as higher-level pipeline elements and machine width. And herein lies the biggest surprise of the Cortex A73 as a A72 successor: Instead of choosing to maintain A72’s 3-wide, or increase the microarchitecture’s decoder width, ARM opted to instead go back to a 2-wide decoder such as found on the current Sophia family. Yet the A73 positions itself a higher-performance and lower-power design compared to the larger A72. 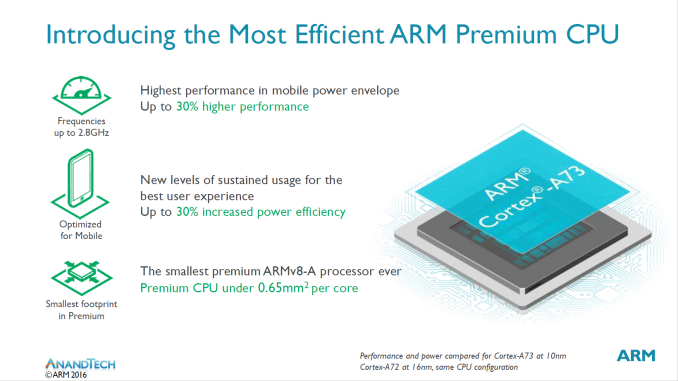 ARM has recognized that power efficiency is a top priority for today’s smartphones. Two words that kept being repeated during the TechDay presentation was “sustained performance”. Performance of today’s mobile devices, and especially smartphones, is limited by their thermal envelope. The thermal envelope is the amount of heat that the body of the device is able to absorb and dissipate until it reaches an equilibrium state. We’ve covered this extensively in recent reviews when testing the amount of time that a device is able to sustain its peak performance before it has to throttle its speed in order to maintain safe and comfortable operating temperatures.

In the past this has been mainly a problem during heavy 3D workloads when SoCs dissipate power at the limits and often exceeding the thermal capabilities of the devices they’re employed in. With some exception the vast majority of today’s flagships are not able to maintain their peak performance for more than a few minutes, and this can be felt in everyday use-cases and can hinder a device’s experience. Over the last 2 generations this has been of especially grave concern as we’ve seen CPUs with peak power regularly exceeding 5W and some problematic SoCs reaching well into 10W+ figures.

It’s imperative that the industry resolves these power and power efficiency concerns as device vendors continue to strive for thinner and lighter smartphone designs. SoCs such as the Kirin 950 which display excellent thermal characteristics must become the norm for the ecosystem to evolve and advance.

ARM understands this and that is why the Cortex A73’s main focus is power efficiency and sustained peak performance. ARM felt that it could achieve these goals with a 2-wide design by improving various aspects of the micro-architecture while still maintaining the same IPC of the Cortex A72.

The Cortex A73 Microarchitecture
Tweet
PRINT THIS ARTICLE
Comments Locked