Now that we’ve covered the basics and the design of the HTC 10, we can move on to the display of the HTC 10. While there are a lot of critical factors to making a good smartphone, the display can be a major make or break point for many smartphones. As we’ve seen in recent reviews, a bad display can make an otherwise amazing phone almost impossible to recommend. In this era of amazing flagships at 300 or 400 USD, it’s incredibly important for a 600-700 USD phone to ship with a great display without any major flaws.

The problem here is figuring out the criteria for a great display. As we’ve seen with recent events, people often disagree on what makes for a great display. However, to start off we can look at the things that really aren’t up for debate for a good display, namely peak brightness, contrast, and minimum brightness. A good display should get as bright as possible so that it can be seen even if you’re outside in direct sunlight, with high contrast to make blacks as inky as possible. Minimum brightness should also be fairly low to avoid blinding a user in low light situations. A display isn’t just a lightbulb, there should be a pixel density high enough that the user cannot ever perceive pixels or aliasing resulting from the use of pixels.

Color is an important part of the visual world, so an ideal display should be able to reproduce every color that a human can see, which means that the native gamut should be as wide as possible. In addition to wide color gamut, the viewing angle of the display should be such that the image looks identical regardless of your orientation relative to the display for all 180 degrees that a display would be visible, with identical brightness and contrast. Displays are also meant to depict movement, so an ideal display should also have instant response time and an infinite refresh rate. Of course, these displays are going into battery-powered devices, so the power draw of the display should approach 0W in an ideal case. Achieving all of these things is obviously impossible, but so is an ideal voltage source. Regardless, discussing what characteristics makes a display ideal is helpful as we can then figure out what metrics are worth testing against. 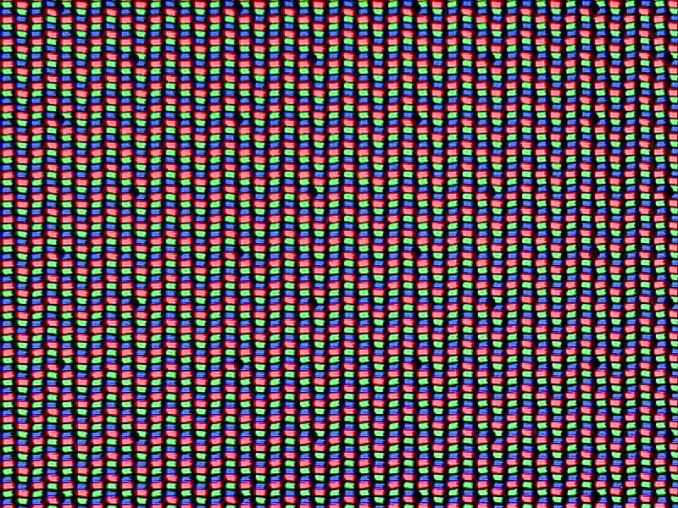 The final point of discussion before we get into our testing is going to be the matter of calibration. While in general larger gamuts are better, the reality of the industry is that it has been an uphill battle to get displays with wide color gamuts into computing devices. Operating systems in general also lack support for color management to support multiple gamuts. However, in order to enable consistent color and other information across multiple devices there needs to be some kind of standard that devices are calibrated to. Currently, it looks like the industry standard for color gamut is sRGB, but looking forward it’s likely that there will be a transition period to DCI-P3, then again to Rec. 2020 when displays can achieve such gamuts without significant compromises. 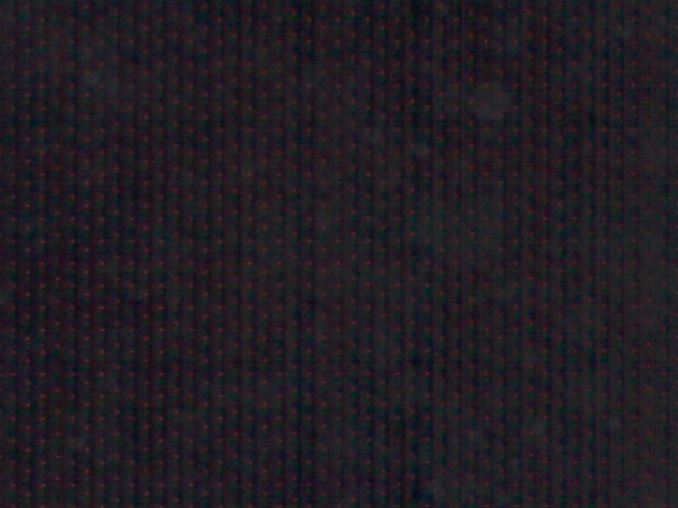 With the basics covered we can start discussing the display of the HTC 10 itself. Poking around the system files reveals that the panel for the review unit is sourced by Tianma with a Himax HX8396C2 display driver, which is designed for controlling panels that use LTPS TFTs. According to Himax’s press releases, the DDIC is the smallest in the industry for QHD LCDs, which helps to reduce the bezel taken up by the display driver. The system files and the spec for this DDIC show that MIPI DSI command mode is enabled for panel self-refresh, and there’s also a sunlight readability mode which adjusts gamma and similar parameters to improve display visibility outdoors similar to Apical’s Assertive Display technology. The display driver also support’s VESA DSC for reduced bandwidth requirements but given that the HTC 10 uses a dual channel MIPI DSI configuration it seems unlikely that this is enabled. 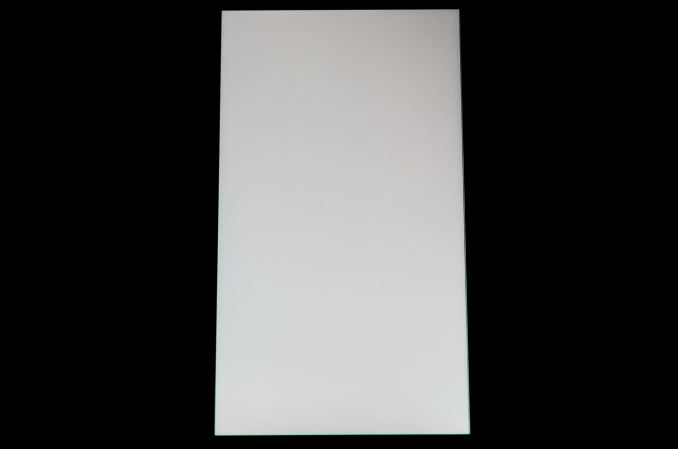 Under the microscope it’s fairly obvious that the HTC 10’s display uses an RGB pattern, but I’m not entirely sure that it has dual domain pixels in the conventional sense, but when looking at two rows of pixels it looks like the form the characteristic chevron pattern that is associated with dual domain pixels. If you look at a black image and rotate the phone around there are also angles where the color shifts towards purple which is associated with this kind of pixel layout. 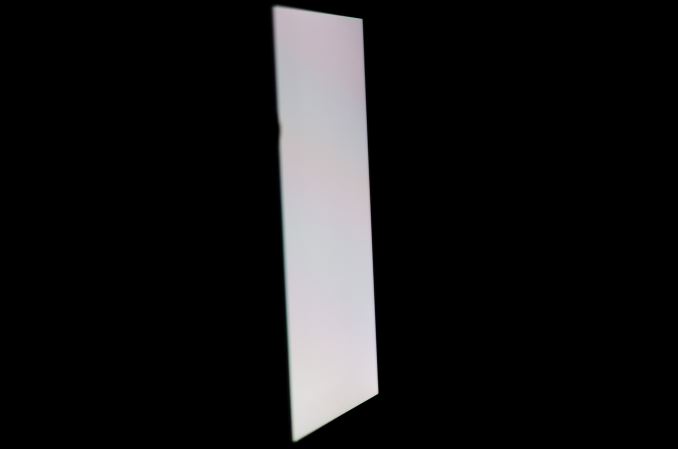 While we’re still on the subject of viewing angles it’s worth mentioning that the Tianma panel on the HTC 10 doesn’t have the greatest viewing angles. While the display doesn’t wash out at extreme angles there is a noticeable red tint or some kind of interference pattern that occurs. I don’t claim to know enough to really explain what’s causing it, but this is definitely a bit of an annoyance when the One M7 was basically perfect in this regard. The M9 Plus didn’t have these issues either, so it’s weird to see HTC running into these problems. 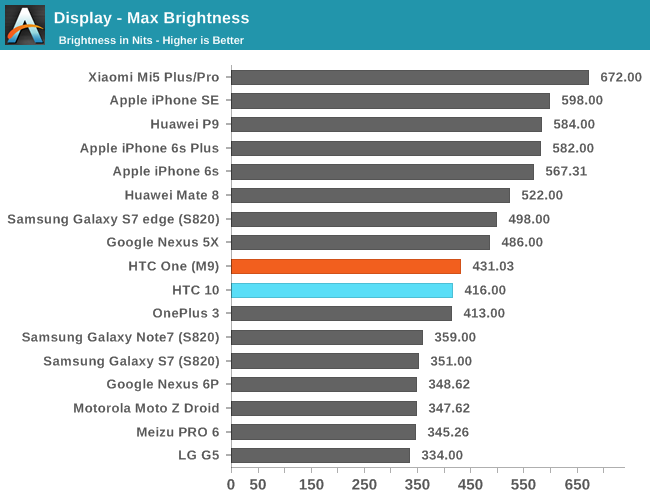 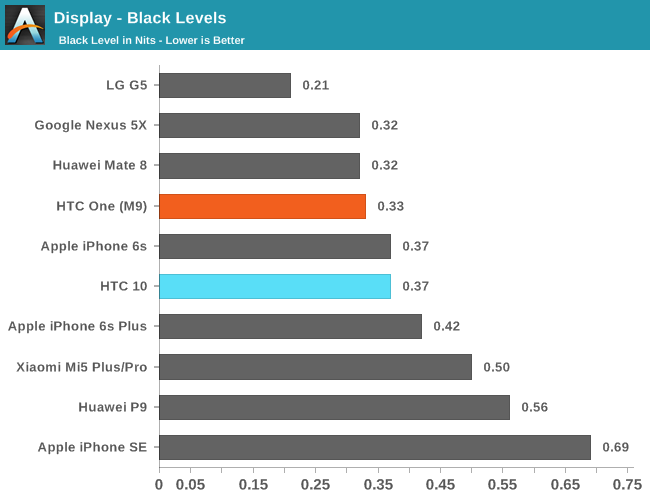 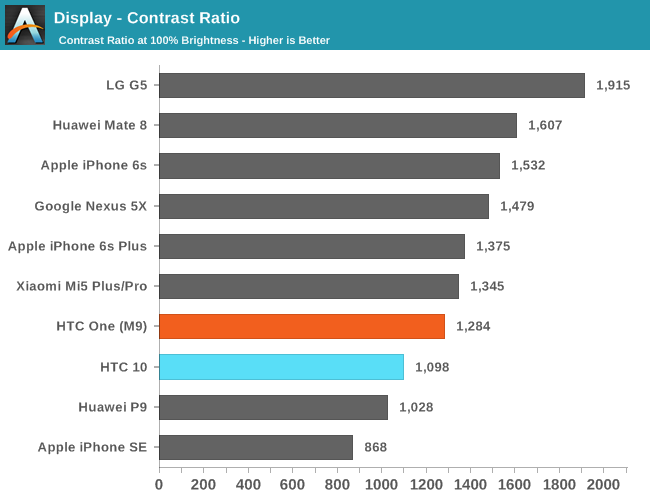 Moving on to our standard display test suite with X-Rite’s i1DisplayPro colorimeter for accurate brightness measurements we can start with our standard display brightness and contrast tests. This is honestly a fairly disappointing result from HTC when they usually tend to ship stellar displays. The display isn’t terrible per se, but the One M9+ was a fair bit brighter and while dynamic contrast hides some things the static contrast is still higher than the roughly 1000:1 contrast of the Tianma display on the HTC 10. I checked with HTC to be sure and the review unit’s display is within their spec, so this is representative of what you should expect with the HTC 10. The minimum brightness is about 10 nits which is decent for night time reading but not really ideal when Samsung is shipping displays that can drop as low as 2 nits for maximum brightness. I'm not 100% clear on the technical challenges here but it's likely that more aggressive PWM on the backlight would make it possible to reach a lower minimum brightness without sacrificing contrast, but this may impact readability for those sensitive to PWM flicker.

While the panel itself is just barely passable on the surface of things to figure out whether it’s actually acceptable for a high-end Android smartphone we turn to our standard test suite for display calibration testing. At the end of the day, subjective observation is often unreliable and inaccurate for determining whether a display is calibrated correctly unless using relative comparisons to a reference display that is correctly calibrated, so we rely on dedicated testing equipment to record the absolute luminance and chrominance and determine the delta relative to the expected values, using X-Rite’s i1Pro2 spectrophotometer for calibration testing. Of course, you need software to make the hardware of any use, so we use SpectraCal’s CalMAN for data acquisition and presentation. 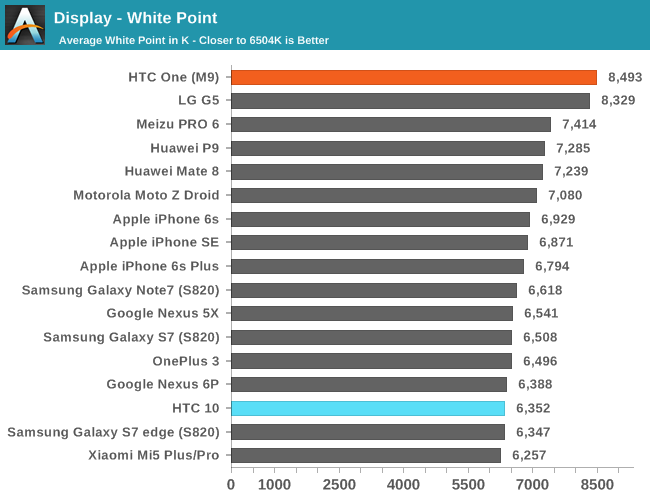 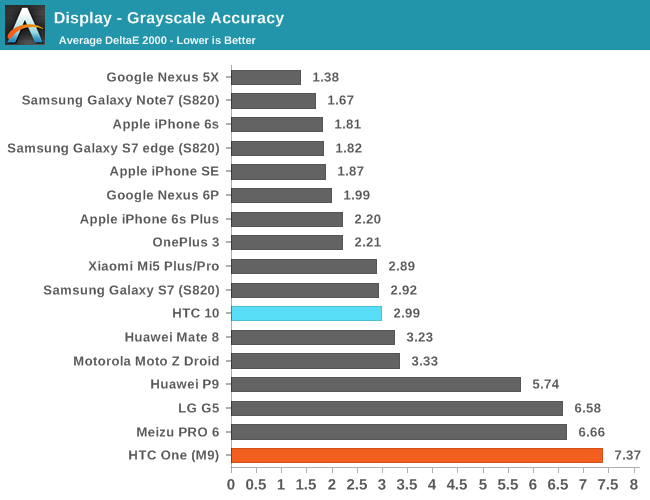 Starting off with our grayscale testing HTC ends up going a bit too warm with their sRGB mode but in general the calibration isn’t too far off the mark, and the average deviation is low enough to be difficult to perceive. Turning the color temperature about one or two notches cooler gets it even closer and does slightly increase maximum brightness but out of the box all you need to do to get acceptable calibration is set the device to sRGB mode. The other point worth noting here is that gamma is relatively unstable with drops down to 1.8 and peaks up to 2.5 but averages out to our target of 2.2, which accounts for most of the error here rather than the slight miss on color temperature. 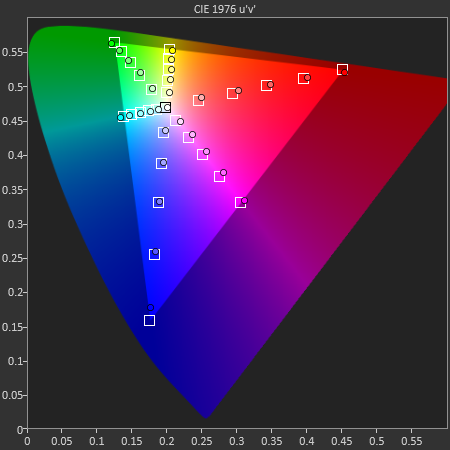 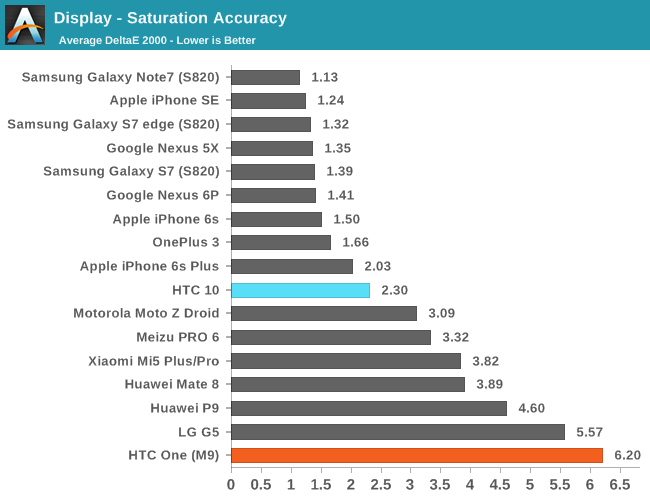 Looking at the saturation sweep HTC does a great job of hitting pretty much every color target. HTC is basically offering the best of both worlds it seems with the ability to have both a vivid mode and an sRGB mode in situations where color accuracy counts, and the sRGB mode is calibrated extremely well with no saturation compression like some devices we’ve seen in the past and next to no deviation from target hues. I don’t really have anything to complain about here as HTC has nailed it almost perfectly. 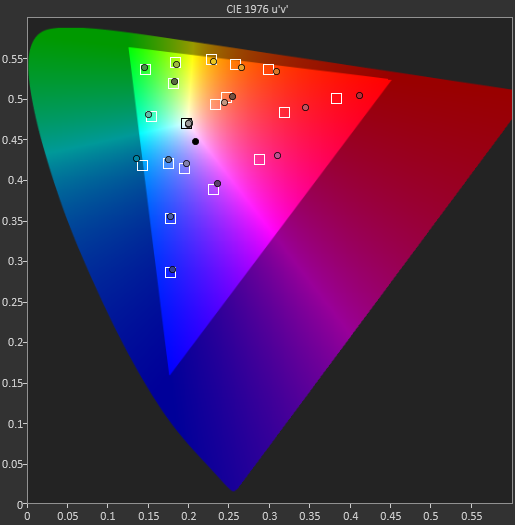 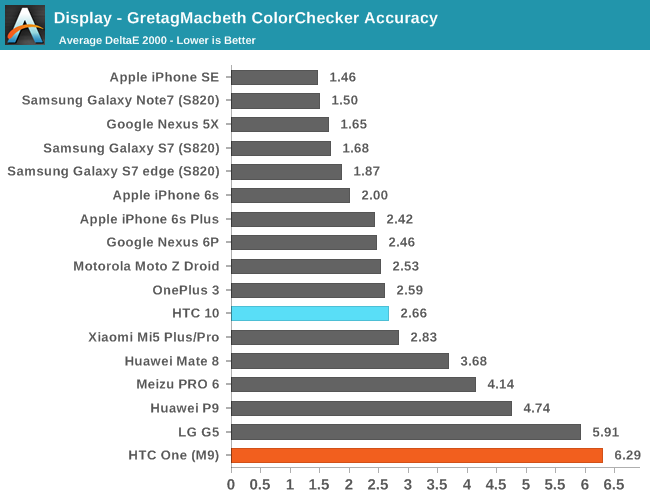 The final test of display calibration for our mobile suite is the Gretag MacBeth ColorChecker, and generally HTC retains excellent color accuracy here, but there is a bit of a bump in the saturation on reddish hues and a generally warm color balance, but the accuracy in general is high enough that the HTC 10 with sRGB mode is basically a reference display which is impressive to see. Relative to the One M9 the HTC 10 is a massive leap forward in pretty much every way.

Overall, the HTC 10’s display is a bit mixed. The use of a Tianma display is somewhat surprising for HTC as they traditionally use Sharp, JDI, and Samsung as suppliers so I suspect that the story behind this supplier choice is an interesting one. While the panel itself is not all that special, it is calibrated incredibly well. I’m not a huge fan of the unitless color temperature slider, but it is a good step up from most as each increment is basically just 200K up or down in color temperature. I would say that on the basis of the panel being just passable in quality it isn’t a deal-breaker, but for future generations HTC should definitely consider shipping a higher quality panel with higher brightness, contrast, and improved viewing angles. It's not so bad that it makes me actively consider recommending against the device on display alone, but the margin by which HTC passes that mark is thin.