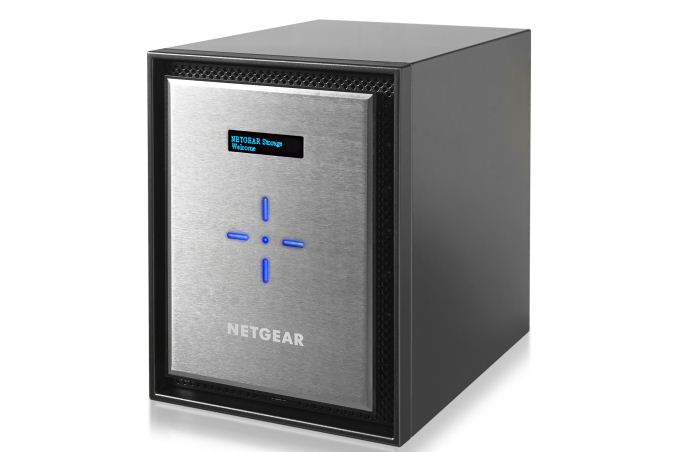 Netgear's ReadyNAS lineup was updated towards the end of last year with some units based on the Annapurna Labs ARM-based SoCs. This year, Netgear is targeting SMBs, creative professionals and SMEs with a new set of desktop and rackmount units based on high-end Intel SoCs and CPUs. All of the new units run ReadyNAS OS 6 - the first COTS (commercial off-the-shelf) NAS operating system to come with support for the btrfs file system.

At IFA 2016, Netgear is launching two new desktop models and two new rackmounts. All of the models, except for one of the rackmounts, come with native 10G capabilities. This goes well with the host of affordable 10G switches that Netgear has launched over the last couple of years. The desktop models are the most interesting from a platform viewpoint - the ReadyNAS 526X uses the Intel Pentium D-1508 2C/4T processor that comes under the Xeon-D 1500 lineup, and the ReadyNAS 626X uses the Intel Xeon D-1521 4C/8T processor. To our knowledge, these are the first COTS NAS units to use these Broadwell-DE (Xeon-D 1500) SoCs. The two units join the ReadyNAS 300 series units as part of Netgear's x86 ReadyNAS lineup. The important specifications of the two new units and how they compare with the other x86 units are provided below. 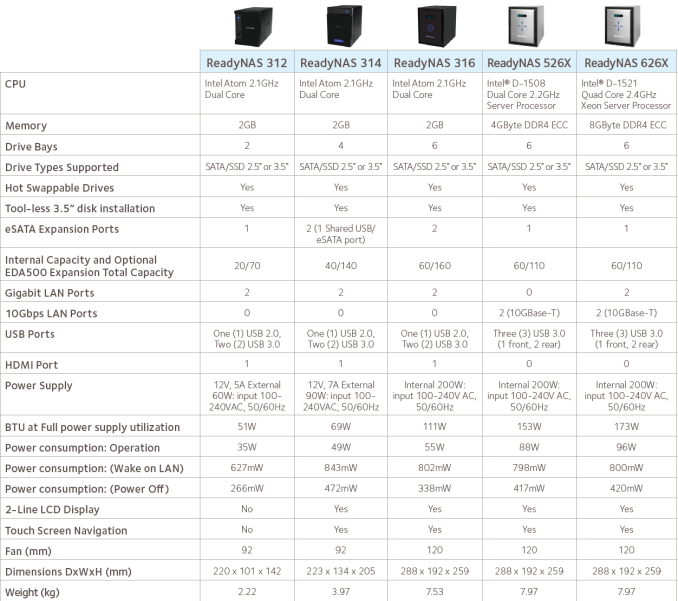 On the rackmount side, Netgear has opted for the Skylake Xeons. The new units have 12 bays and come with quad 1G LAN ports. All of them have two mini-SAS ports for storage expansion. The ReadyNAS 3312 doesn't have any 10G ports, while the ReadyNAS 4312 has two. The 4312S has two optical SFP+ 10G interfaces, while the 4312X has two 10GBase-T ports. 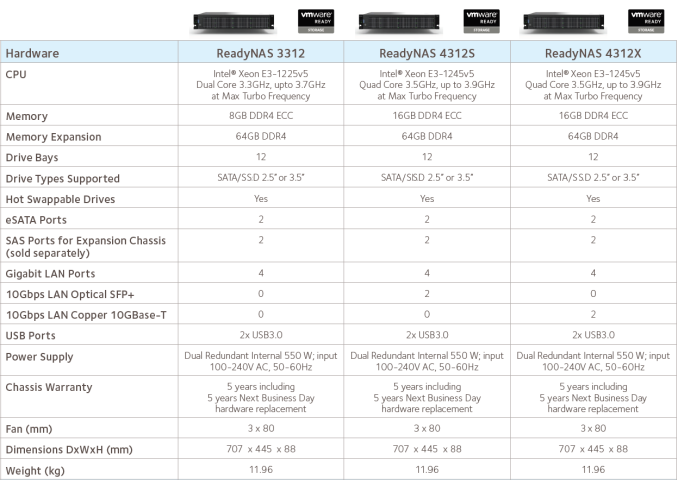 The only disappointing aspect is that the rackmount units don't come with support for SAS drives.

In terms of software features, the btrfs implementation allows Netgear to enable seamless snapshotting capabilities and also offer bitrot protection. There are some value additions in the form of ReadyDR (disaster recovery) that allows block-level backup to / restore from another ReadyNAS unit in the LAN. Netgear also has the ReadyCLOUD service for seamless VPN access and private cloud capabilities.

Netgear's decision to go with the Xeon-D SoC lineup has enabled them to create more efficient units (in terms of hardware) compared to the competition. The ReadyNAS OS 6 features are also in the process of getting tuned with customer feedback. Most important business requirements are already implemented, but competitors have a huge advantage, thanks to third-party apps. Features such as native virtualization (host OS capabilities) and containers (Docker) support enable the competitors' units to fully utilize all the available CPU cycles (once the core requirements related to file serving are met). The same can't be said of Netgear's current version of the ReadyNAS OS. However, for SMBs / SMEs with well-defined requirements / workloads, the new 10G-enabled ReadyNAS units definitely merit consideration, thanks to a combination of attractive pricing and possible reseller-dependent deals involving bundled 10G switches.