What do you do after you’ve launched one of the thinnest and lightest gaming laptops featuring the new NVIDIA GTX 1080 GPU? Razer found itself in this situation after announcing the long anticipated update to their large gaming laptop last year, with the launch of the Razer Blade Pro. At 7.8 lbs and 0.88 inches thick, it’s one of the most interesting gaming laptops announced last year, and our full review is coming soon. Meanwhile, Razer decided to take their Razer Blade Pro, and add two more displays to it.

Today Razer is announcing Project Valerie, which is the world’s first portable laptop with three built-in displays. To do this, they didn’t make the main display smaller either. All three displays are 17.3-inch UHD (3840x2160) IGZO panels with 100% Adobe RGB coverage. I’ll leave the discussion on why 100% Adobe RGB isn’t a great experience for another day, but with the three displays, you get a 11,520 x 2160 resolution experience with Project Valerie. Since this is going to be a struggle to drive even with the best GPU, all three displays also support G-SYNC. The displays themselves have a motorized hinge to put them into position, and they slide back and slide under the main panel when stowed. It’s an interesting feat of engineering.

Just to be clear, this is currently just a prototype, but yesterday at CES Ryan Smith was able to visit Razer and check out this project. Razer has a couple of prototypes - ranging from proof-of-concept designs to the final industrial design - and not all of them have the movable displays, but they were functioning prototypes. One of the proof-of-concept prototypes was even playing Battlefield 1 in a full 180° NVIDIA Surround View gaming setup. 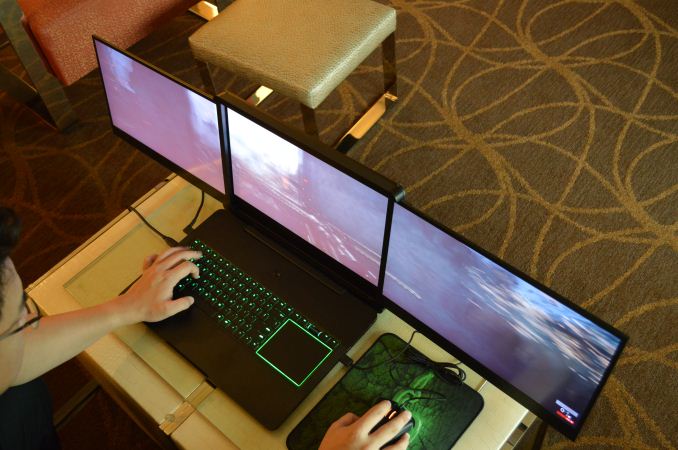 Razer is building this system as a mobile workhorse, and by starting with the Razer Blade Pro, they already have a thin and light system for the amount of compute available. Final specifications are not complete yet for the dimensions and weight, but Project Valerie with its triple monitors will be in the same aluminum CNC chassis format as the other Razer laptops, with a thickness of just 1.5-inches, and a final weight between 10 and 12 pounds, which is really not much different than many other 17.3-inch gaming notebooks.

This would be excellent for an office user, where the extra display real estate would make multitasking much easier, and any of us who leverage multiple monitors regularly, like I do, can see this being an amazingly portable office machine too. One of the things I hate most about using a laptop on the road is that it only has a single display, making it difficult to get work done. Often I have to resort to crazy things like bringing multiple devices on a road trip for proper workflow, as seen below. 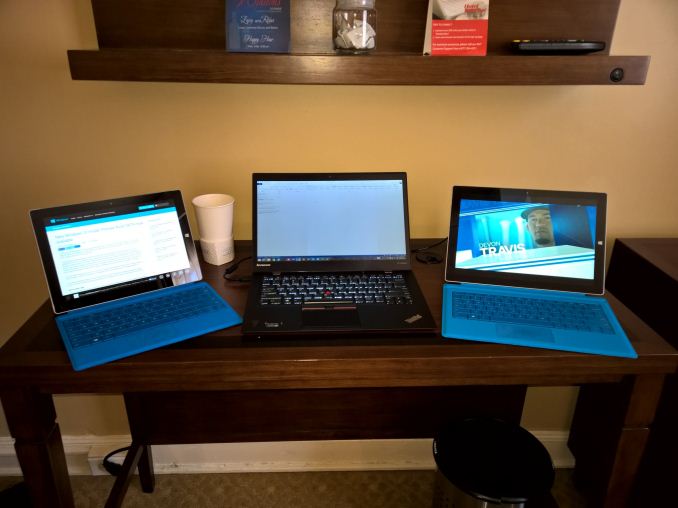 The basis of Project Valerie is the Razer Blade Pro, with a quad-core i7 mobile CPU, NVIDIA GTX 1080, and plenty of RAM, at least for the prototypes, and this may change later. For outright gaming, the single GTX 1080 is going to struggle with this kind of resolution of course, but if and when this comes to production we’ll see what Razer can do about that. It also features the ultra-low-profile mechanical keyboard from the Pro, with per-key RGB backlighting and Chroma support. 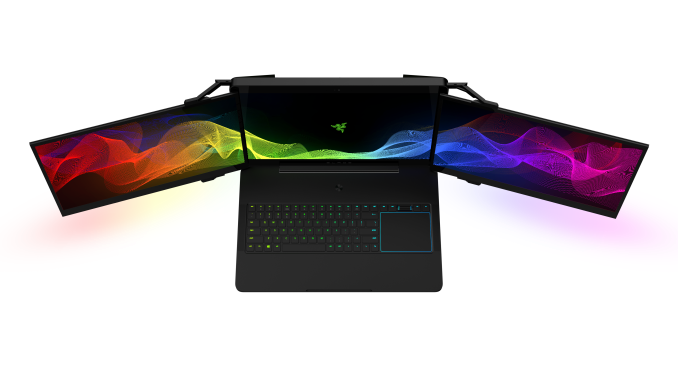 Although this is just a concept, it’s a very interesting concept, and if properly executed it could be a very exciting machine. For the time being, it is being shown at CES as a working prototype, which means it’s possible it may be put into production. Time will tell.