The GIGABYTE Aorus RGB M.2 SSD Review: Nothing Is Too Small For RGB LEDs 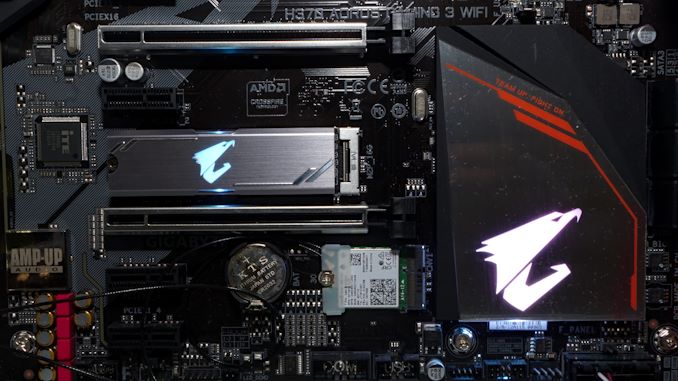 GIGABYTE entered the SSD market last year somewhat timidly with entry-level SATA drives, and they've been working their way up the market since. Their new Aorus RGB SSDs are high-end NVMe drives designed to catch the attention of gamers. Both M.2 and PCIe add-in card models are hitting the market starting today, and we're taking a look at both of the M.2 models.

The Aorus RGB SSD is based on the now familiar combination of Toshiba 64-layer 3D TLC NAND flash memory and the Phison E12 controller. We've repeatedly found this combination to be competitive in the high-end NVMe market segment, though all of our previous tests were in the 1TB capacity class. The Aorus RGB M.2 is our first look at the performance of smaller E12 drives, which are unavoidably challenged by having fewer NAND flash chips to use in parallel.

The Aorus SSDs aren't the first M.2 drives with heatsinks that we've tested, but they are the first M.2s with RGB LEDs to cross our testbed. We have previously reviewed RGB SSDs in larger form factors (SATA and PCIe add-in cards) and often find that the premium aesthetics aren't backed up by premium performance. That is not likely to be a problem for the Aorus SSDs given the choice of the Phison E12 platform.

The heatsink and lighting on the Aorus SSD help it fit in with other Aorus-branded products from GIGABYTE. The RGB lighting illuminates the Aorus eagle logo with a solid color. On its own, the drive cycles through colors while pulsing the brightness of the LEDs. The Aorus SSD's lighting can also be controlled through GIGABYTE's RGB Fusion 2.0 utility, but only when the SSD is installed in a supported GIGABYTE motherboard. The support list is currently very narrow, including only their Z390 Aorus boards and the X299 Aorus Master. We happened to have an H370 Aorus Gaming 3 WiFi motherboard handy during testing and confirmed that it did not enable control of the SSD's LEDs. (We did not have one of the supported Z390 boards on hand for this review.)

The lighting on the Aorus RGB M.2 SSD seems to be much dimmer than most of the lights on our motherboard: the photo above was taken with the SSDs in their default pulsing mode, and the LEDs under the PCH heatsink set to around 20% brightness in the RGB Fusion 2.0 utility. While setting up this picture, the two SSDs were initialized by the system at slightly different times, so their color cycling was not quite synchronized. Aside from this effort to test and photograph the RGB LEDs, all our usual performance tests were performed on our regular SSD testbed.

The performance specifications for the Aorus SSDs are typical for drives using the Phison E12 platform, derated somewhat for the lower capacity compared to the 1TB models we are usually sampled. Write speeds suffer the most at low capacity, but random read performance is also much slower for the smallest Aorus.

Write endurance is a little over 0.8 drive writes per day, comparable to other high-end consumer SSDs. Launch pricing is quite steep thanks to the addition of the LEDs and heatsink.

Our review samples shipped with Phison E12 firmware version 12.1, the same that we recently tested in a 1TB drive. Version 12.2 has started to show up on drives from other vendors (including a sample for an upcoming review), but it is not yet clear when GIGABYTE will be rolling out the new firmware to their customers. 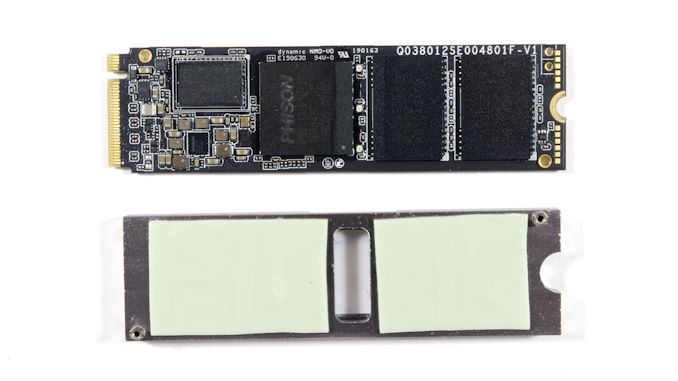 The LED lighting and heatsink for the Aorus SSDs required a few relatively minor tweaks to the PCB layout: holes in two opposite corners for mounting the heatsink, and a row of three RGB LED modules sitting between the controller and the NAND flash memory. The heatsink uses thermal pads on both the NAND and the controller/DRAM, with a gap in the thermal pad for the LEDs. Other than the LEDs and heatsinks, all the major components are quite familiar, including the Phison E12 controller and Toshiba 64L 3D NAND.

For comparison against the Aorus SSDs, we have chosen to focus mainly on other recent NVMe SSDs of comparable capacity. This leaves out some recent product lines where we have only been sampled the fastest 1TB or larger models, which can often outperform 512GB and 256GB drives even when the larger drive has the inferior controller or firmware. The Silicon Power P34A80 is included as a reference for how the Phison E12 platform with the same 12.1 firmware performs in the 1TB capacity class. Other drives to keep an eye on: