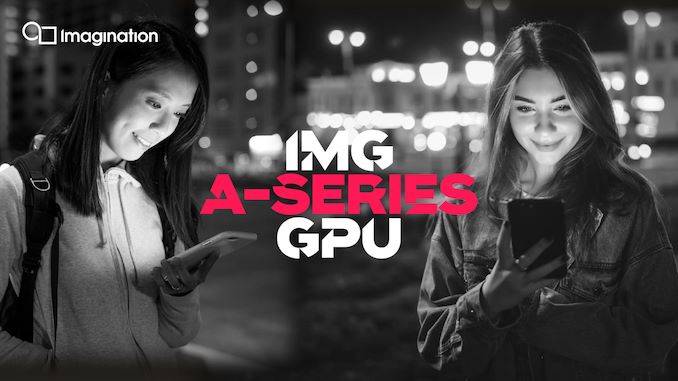 There are very few companies in the world able to claim a history in the graphics market dating back to the “golden age” of the 90’s. Among the handful of survivors of that era are of course NVIDIA and AMD (formerly ATI), but there is also Imagination Technologies. The company has been around since the early days of graphics accelerators and has seen a shifting industry. In the early to mid-2000’s the company moved away from the desktop space, instead focusing on offering GPU IP optimized for mobile devices.

The mobile GPU IP market these days is a quite barren landscape; Imagination’s long history along with Arm’s rise to a leadership position with the Mali GPUs has essentially created a duopoly, as smaller vendors such as Vivante have exited the market. The problem of duopolies like these is that there’s a risk of stagnation if either vendor falls behind in terms of technology, and most of the time this comes at the cost of the vendors who rely on licensing the IP.

Over the last several years in particular, we’ve seen a larger shift in the mobile market dynamics as Qualcomm has increasingly managed to dominate over its competitors. The more vertically integrated company produces its own SoC designs using its own in-house GPU IP, and as a result isn’t reliant on technologies from Imagination or Arm (CPUs are a whole other story).

More recently, we’ve seen Apple’s custom GPU efforts make huge leaps in performance and efficiency. While officially we have no concrete information on the behind-the-scenes details of Apple’s design, it’s commonly regarded as a design forked-off from Imagination IP back in 2015, which Apple continues to independently develop thanks to an architectural license. The relationship between Apple and Imagination nowadays is still quite unclear, but the frictions from back in 2017, which ultimately lead to Imagination putting itself to sale and being bought by an equity firm with Chinese investors, seem to have calmed down.

The more important situation to consider is that the two leading GPUs in the mobile market today – Apple and Qualcomm – are designs that are internally developed by the SoC vendors themselves. This is a bit troubling for everybody else in the market, as their reliance on IP licensing means they’re limited in what they’re able to do. MediaTek had suffered quite a lot in terms of market share versus Qualcomm for example (GPU being only one of many other reasons). Other vendors such as Samsung have evidently also realized their situation, and launched development of their own internal GPU architectures, with a more recent surprise development of actually licensing new GPU IP from AMD in order to compete with Apple’s designs.

With that quite long foreword and context in mind, we come full circle to Imagination as well as today’s announcement. Today, the company is revealing its new A-Series GPU IP, describing the new product as Imagination’s most important GPU and IP launch in 15 years. The wording here is extremely strong, and the goals of the new product seem pretty clear: reverse the trend of market share loss against custom GPUs in the market, and put licensed GPU IP back at the forefront of performance. 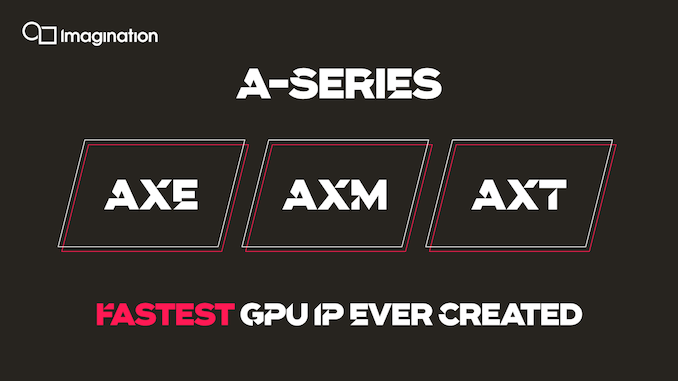 A-Series is the company’s 10th generation GPU architecture and represents a big leap for the company. Even something simple, like the product names, have changed. Gone is the longstanding PowerVR branding, in favor of a more immediate focus on Imagination the company. We'll still see PowerVR around – Imagination is keeping it to describe their technology, particularly their tile-based deferred rendering approach – but after over 20 years it's no longer a brand in and of itself.

As a note on the new GPU IP naming scheme: it’s a deliberate departure from the numerical numbering of the past, and instead is trying to represent a new clean start going forward. I asked, but unfortunately the name it isn’t meant to be a clever twist on a “Series 10” with the numbering now represented in hexadecimal, a pity I say!

The new naming crosses the company’s whole GPU range going from the low-end, mid-range to high-end. Here we see the continuation of the XE, XM and XT suffixes; however as in the past, there are architectural differences between the IPs, with today’s news mostly covering the new XT series. 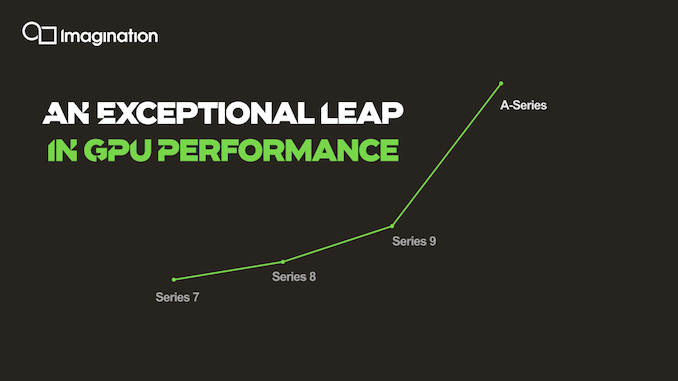 As mentioned, the new A-Series promises to bring some exceptional leaps in performance compared to past generation designs, although it’s also important to point out some footnotes on the matter. 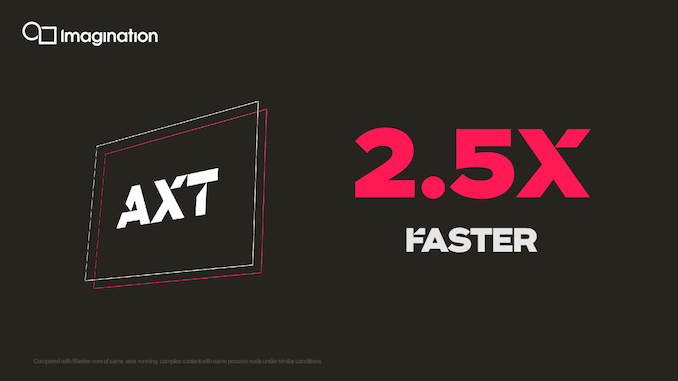 An important metric that’s been showcased today is Imagination's claim that the new A-series XT design is 2.5x faster. "Fast than what" you might ask? The figure represents the new architecture’s performance leap in an ISO-area and process node comparison against Imagination's previous generation Series 9 GPU.

The thing to note is that the company isn’t doing exact apples-to-apples comparisons between different generations of XT GPUs, but rather is making comparisons to the latest widely available “Series 9” on the market. This was an unfortunate, but yet practical choice to make given that currently there’s no publicly announced or available chips which make use of the company’s 8XT or 9XTP designs.

The comparison data here is likely based on MediaTek’s Helio P90 with the GM9446 – technically part of the 9-series, but also architecturally based on the older Rogue architecture. Imagination wanted to be more transparent in regards to its area and performance claims for the A-Series, and the comparison with the 9XM Rogue-based GPU provides a much more recent and readily available baseline against which vendors can independently verify and compare metrics to. 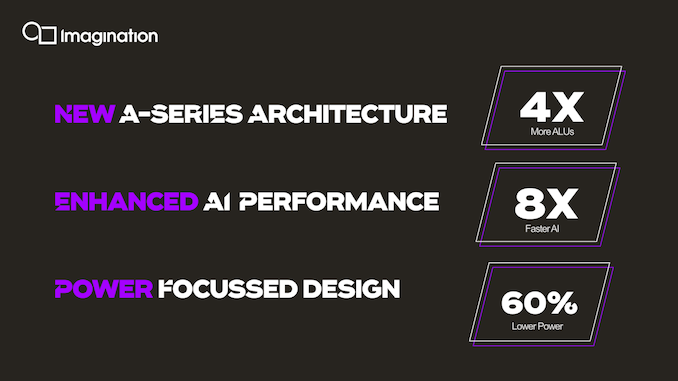 Key improvements of the A-Series include a massive overhaul over the GPU’s compute units and ALU architecture, promising a 4x increase over a 9XM Rogue GPU. AI is a first-class citizen in the A-Series and we’ll be seeing dedicated compute resources resulting into improvements of up to 8x in performance. Finally, the new architecture is said to bring a very large leap in terms of power efficiency, with the new design consuming 60% less power for a similar level of performance. 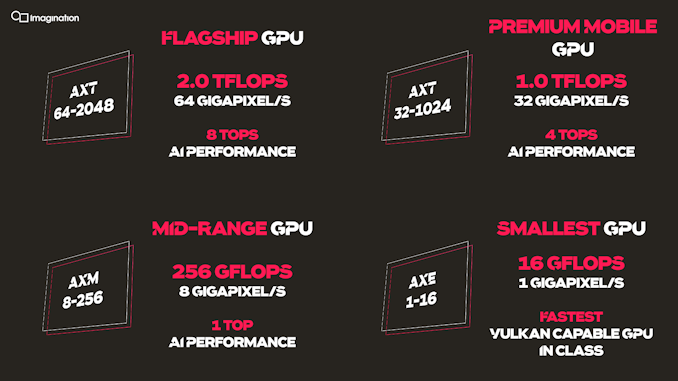 Imagination’s naming for the new A-Series is extremely straightforward in regards to understanding their positioning a performance. The AXT-64-2048 for example represents the highest end configuration of the architecture in the XT range, achieving 64 texels per clock and 2048 FP32 FLOPs per clock. AI TOP performance is quadruple the FLOPS, so in this case for an envisioned 1GHz design, the AXT-64-2048 reaches 2 TFLOPs in graphics and compute power, 8 TOPs in INT8 inference throughput, and 64 Gigatexel/s fill rate.

It should also be noted that it's more correct to say Gigatexels/s instead of Gigapixels/s as in the marketing materials published - Imagination found that a lot of people didn't correctly grasp the meaning of texture fillrate and thus opted to simplify the marketing information in pixels/s.

Imagination envisions the AXT-32-1024 to be the traditional sweet-spot target for a premium mobile GPU SoC in smartphones, while the larger configurations would possibly be used in larger form-factor devices. 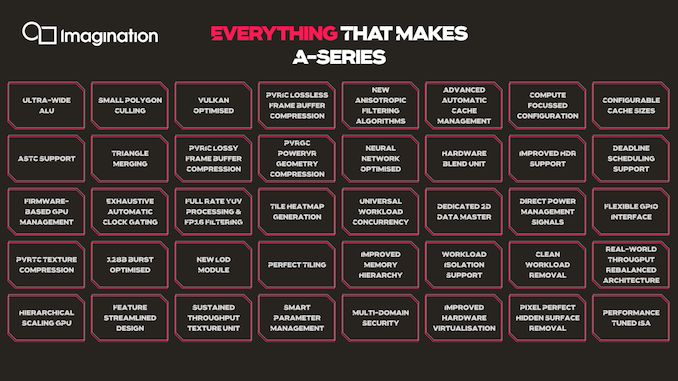 The company calls the A-Series “the GPU of everything”, and there’s indeed a ton of changes and features that make up the new IP. We’ll be covering a few aspects of the company’s disclosed big matrix of features above, starting off with one of the biggest changes, the GPU’s ALU architecture.