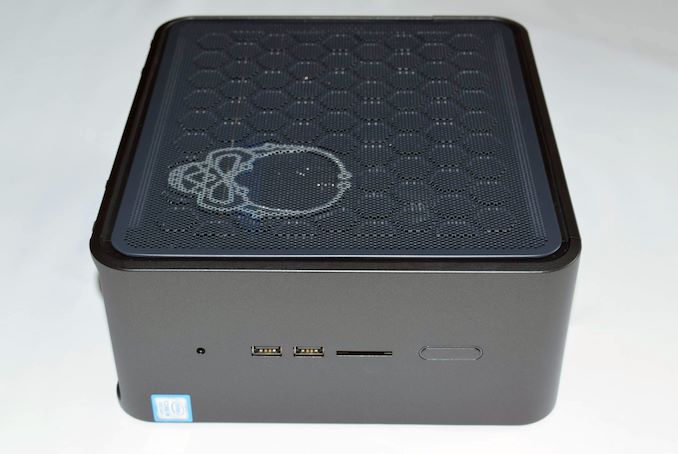 Small form-factor PCs and gaming systems have emerged as bright spots in the mature PC market over the last decade or so. Intel's NUC form-factor introduction was the turning point in the small form-factor (SFF) market. Over several generation of products, the NUC family has expanded to address different market segments. But even with those developments, DIY enthusiasts have traditionally given the NUCs a cold shoulder by pointing to the lack of flexibility and limitations such as the inability to use a discrete GPU. So to to address the requirements of the performance enthusiasts, Intel introduced the Skull Canyon NUC in 2016 and followed it up with 2018's Hades Canyon NUC.

Following that same strategy of developing enthusiast-tier NUCs, at CES 2020, Intel officially announced the Ghost Canyon NUC series of products (NUC 9 Extreme Kits), which are based on the Intel NUC 9 Extreme Compute Elements. Among other notable changes, the series adds the ability for end-users to add a standard PCIe video card to the system system. The products have been made available to OEMs and ecosystem-enablers since late 2019, and they are finally reaching retail availability this month.

With their latest NUC finally available at retail, Intel has sent us an engineering sample of the top-end Ghost Canyon NUC, the NUC9i9QNX. Intel has equipped the NUC with matching build components to create a premium SFF gaming / workstation system. Read on for a review of the NUC9i9QNX and an analysis of the Intel Compute Element and its associated ecosystem.

The Ghost Canyon NUC9i9QNX is Intel's current top-end NUC with a NUC 9 Extreme Compute Element (NUC9i9QNB) housed in a 238mm x 216mm x 96mm chassis. NUCs have traditionally been associated with the ultra-compact form factor (100mm x 100mm boards in a 0.63-litre or 0.42-litre volume chassis). The Skull Canyon and Hades Canyon products with their higher TDP processors had to be accommodated in 0.69L and 1.2L chassis, but the Ghost Canyon NUC kits with their support for PCIe video cards takes it to a whole new level with a 4.94L chassis.

Though make no mistake: while biggest than the smallest NUCs, this is still well within the realm of SFF PCs. In fact, the smallest SFF PC with support for PCIe video cards that we happen to be aware of is the ZOTAC ZBOX MAGNUS series, with a 5.8L chassis. The Ghost Canyon NUC chassis includes a built-in power supply while the ZOTAC mini-PC uses an external adapter, which if counted would add further to its volume. As a result, the Ghost Canyon NUCs take the title of the smallest ever PC lineup to support user-replaceable discrete GPUs by a comfortable margin.

Intel's NUC lineup has traditionally included board and kit variants, allowing its partners to provide value additions (such as a passive chassis or additional I/O ports in the end system). Kits (other than the ones that come with a pre-installed OS) require the end-user to add storage, DRAM, and install an OS to complete the system. Some kits support a 2.5" drive in their chassis configuration, while others are M.2-only from a storage perspective. The Ghost Canyon series of products also follows a similar philosophy, while greatly increasing the flexibility for the end-user. Towards that, a Ghost Canyon is system comprised of multiple parts, which can be picked and chosen by OEMs / end-users to create a system for specific use-cases:

An off-the-shelf Ghost Canyon NUC9i9QNX kit leaves only the DRAM, non-volatile storage, and discrete GPU to the choice of the end-user. Prior to the platform analysis and overview of our review configuration, let's take a look at the pre-decided components in the above list. 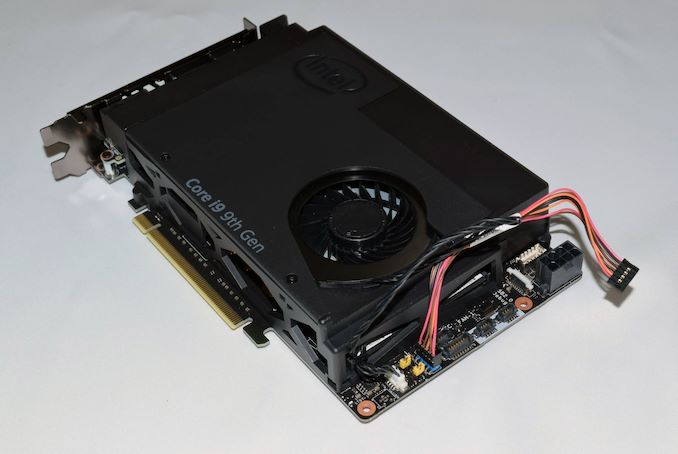 Intel's backplane/baseboard design for the NUC 9 Compute Elements is comprised of two PCIe x16 slots and a sole PCIe x4 slot, as well as a PCIe x4-backed M.2 22110 slot. One of the x16 slots is dedicated to the Compute Element. The other x16 slot operates in x16 mode as long as the PCIe x4 slot and the M.2 slot remain unoccupied. If either slot is occupied, then x16 slot operates in x8 mode. Essentially, the x16 attachment to the Compute Element can electrically operate as x16 or (x8 + x4 + x4). Further down in the platform analysis section, we will see that these 16 lanes come directly from the processor (and not the CM246 PCH). The baseboard has an explicit power connection to the PSU for supplying power to the PCIe slots. 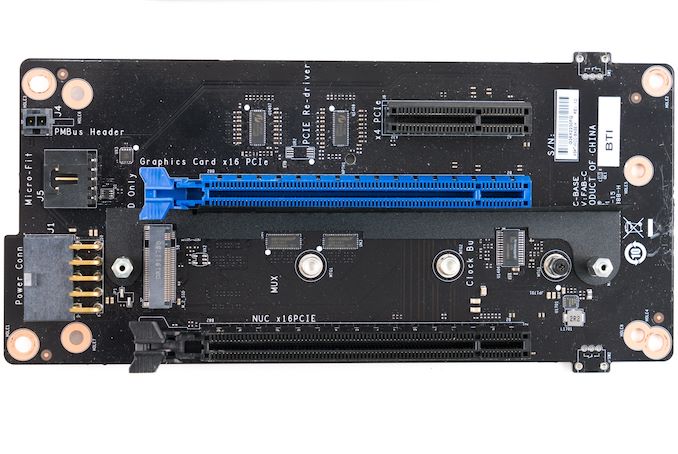 The baseboard photograph reveals two ASMedia ASM1480 mux/de-mux chips to enable the splitting of the PCIe lanes. Note that these are true muxes and not PCIe switches, so physical lanes are being reallocated when additional cards are connected, and the GPU is hard limited to x8 bandwidth (~8GB/sec) in that case. And while unlikely, thanks to Intel's bifurcation rules, it should be noted that anything that tries to split the x16 slot (e.g. a M.2 riser with multiple M.2 slots) would disable the PCIe x4 slot as well (though the M.2 slot remains usable).

On that note, for the purposes of our review sample, Intel equipped the system with a 380GB Optane SSD 905p, connected to the M.2 slot in the baseboard, as well as an ASUS Dual GeForce RTX 2070 MINI 8GB GDDR6 card in the x16 slot. Due to the baseboard architecture, the card operates in x8 mode in the supplied review configuration.

The NUC9i9QNX chassis has been designed with the intent of retaining the ease of installation that the NUCs are famous for. The dimensions have also been kept as small as possible while providing the ability to install a dual-slot PCIe card (up to 202mm in length and 131mm in height) in the baseboard along with the Compute Element.

The top panel of the chassis slides off after the two screws in the rear are loosened. This panel also includes two 80mm x 15mm fans below the perforated top portion. The 12V supply for the fans are delivered through a snap-on connector, as shown in the above gallery. The perforated side panels can be removed by sliding up after the removal of the top panel. On the side opposite to the Compute Element slot, the top bar on the chassis can be taken out (to aid in the installation of a PCIe card) by removing two screws.

The I/O ports in the rear panel are directly off the Compute Element. However, the front I/O ports require the routing of on-board headers in an appropriate manner. The front panel of the NUC9i9QNX has a power button and an audio jack (connected to the front panel audio header on the board), a SDXC slot, and two USB 3.1 Gen 2 Type-A ports. The last three are enabled by a daughterboard containing a Genesys Logic GL3227 USB 3.1 Gen 2 hub chip and a Genesys Logic GL3590 SDXC to USB bridge chip. The hub chip in the daughterboard is perhaps unavoidable due to the inability of the headers to be individually routed to distinct ports in the front panel (given the volume constraints of the small chassis).

Overall, despite the plastic framing in the front panel, the metal-based construction in other areas gives the chassis a premium look and sturdy feel. Space management in the absence of a discrete GPU or PCIe cards is simple, but things get really cramped when the chassis is stuffed to the gills (as in the case of our review configuration).

An attractive aspect of the NUC9i9QNX is the built-in 500W 80 PLUS Platinum power supply. Most SFF PCs (including similar powerful ones like the ZOTAC ZBOX MAGNUS series) use bulky external adapters, so the ability to use just a simple power cord with the system is a welcome one from the perspective of a compact installation. 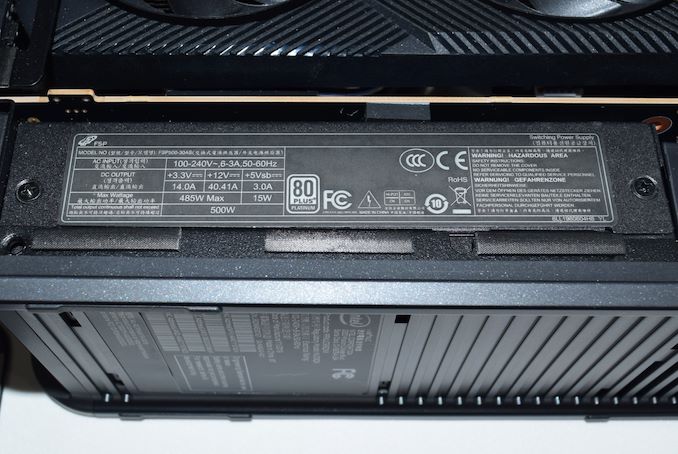 Intel has used the FSP500-30AS, a new PSU from FSP in a Flex-ATX form-factor. The cables enable up to 150W to be supplied to the add-in card directly. Along with the 75W budget from the PCIe connection, the NUC9i9QNX supports cards that consume up to 225W.

Our review sample of the NUC9i9QNX came with the following components pre-installed:

A configuration with a high-end PCIe 3.0 x4 NVMe SSD relegated to being a dedicated secondary drive leaves no doubt that the system represents Intel's vision of a maxed-out premium SFF PC build.​

In the next section, we take a look at the full specifications of our review sample, followed by a detailed platform analysis along with some notes on our setup experience.