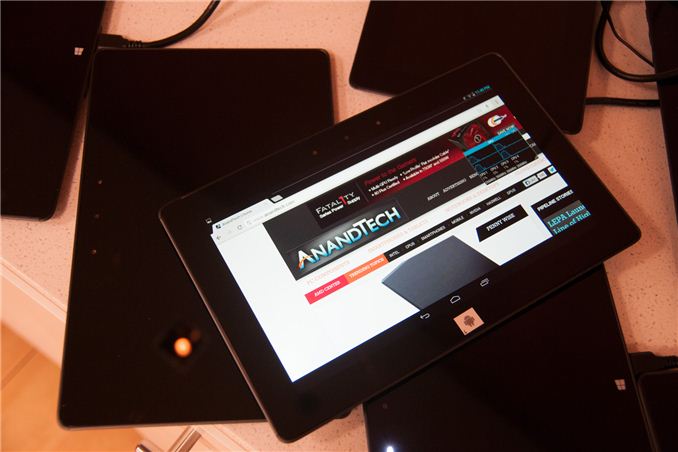 Earlier this year Intel unveiled Silvermont, its first true architectural update to Atom since its introduction in 2008. I won’t rehash Silvermont’s architecture here, but it’s designed to be a true test of Intel’s performance in the ultra mobile space. Leveraging Intel’s first 22nm SoC process and a very low power/efficient microarchitecture, Silvermont aims squarely at the latest Krait cores from Qualcomm and ARM’s Cortex A15.

Bay Trail takes up to four Silvermont cores, and for the first time in an ultra mobile Intel SoC pairs them with Intel’s own graphics IP. That’s right, rather than using a GPU block from Imagination Technologies, Bay Trail leverages the same GPU architecture as Ivy Bridge. 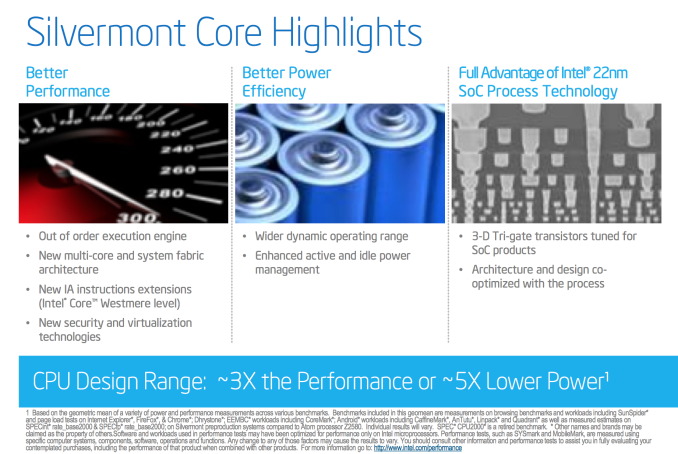 The first Bay Trail tablets will be shipping by the end of the year, across both Android and Windows 8.1. Intel expects Bay Trail to show up in tablets and 2-in-1s priced below $599, with everything above $599 falling under Haswell’s jurisdiction. 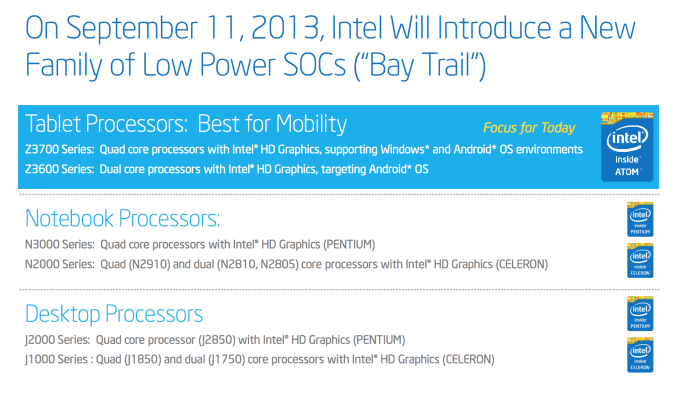 Bay Trail, like all Atom platforms before it, will be available in multiple form factors. Unlike the Atoms of yesterday however, the SoC will carry Pentium and Celeron branding when used in notebooks and desktops. Intel didn’t disclose too much about its Silvermont plans in other form factors other than some basic naming:

Basically notebooks ship under the Pentium N3000 & Celeron N2000 series, while desktops will carry Pentium J2000 & Celeron J1000 branding. All Pentium SKUs seem to be quad-core, while Celeron SKUs will be available in both dual and quad-core versions. 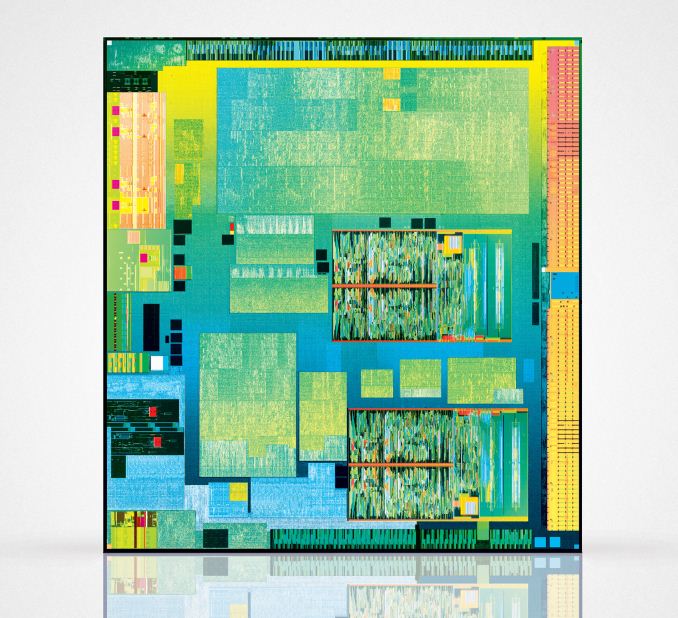 Although Intel offers both dual and quad-core Bay Trail SKUs, they are both based on the same single physical design. In other words, dual-core Bay Trail parts are just die harvested quad-core parts. Intel isn’t disclosing die size or transistor counts, which is ironic (and disappointing) given that Apple just disclosed both (or at least relative magnitude of one) for its A7 SoC. 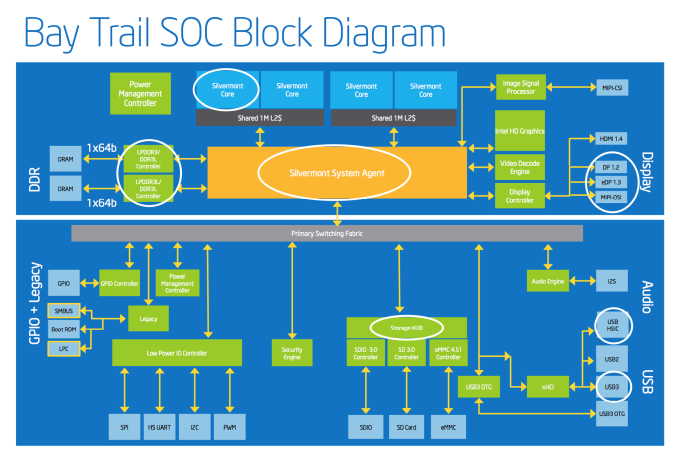 Internally, the Bay Trail design is pretty nice. There are either two or four cores enabled, each pair with a shared 1MB L2 cache (2MB total for a quad-core part). Intel is following the unfortunate lead of everyone else in the mobile industry and advertising max turbo frequencies exclusively. 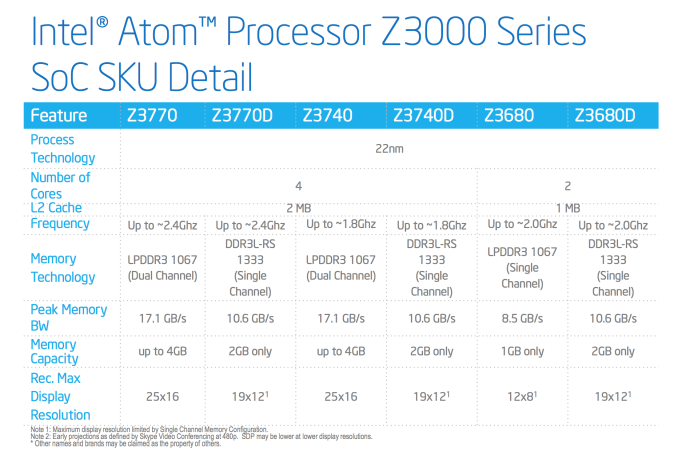 In general you’re looking at 1.33GHz - 1.46GHz max non-turbo frequencies, with Bay Trail being able to turbo up to anywhere between 1.83GHz and 2.40GHz depending on SKU.

Although the core architecture is 64-bit in design, there will be no OS support for 64-bit Bay Trail at launch. Windows 8.1 with Connected Standby appears to still be 32-bit only, and obviously Android is 32-bit only at this point as well.

The memory interface is fairly ridiculous by mobile standards. You either get two 64-bit LPDDR3 channels (128-bit total width) or a single 64-bit DDR3L channel. In the case of the former, that’s the same memory bus width as Apple’s A5X/A6X line of SoCs as well as the standard Core i3/i5/i7 parts. Max supported memory frequency is 1066MHz in dual-channel LPDDR3 mode, or 1333MHz in single-channel DDR3L mode. The only benefit to the latter is really cost, as Bay Trail will purportedly show up in some very cheap devices. 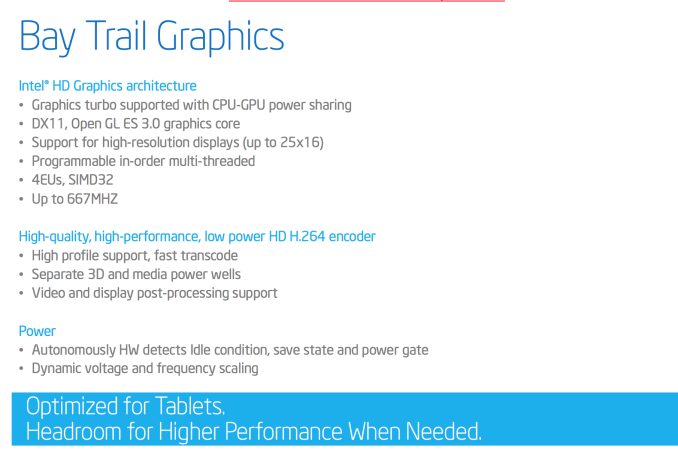 The GPU is Intel’s own Gen7 graphics core, a cut down implementation of what we first saw in Ivy Bridge. I suppose it’s premature to expect Merrifield, Bay Trail’s smartphone counterpart, to also use Intel’s own graphics core but it’s clear this is the direction Intel is headed in - and away from licensing IP from Imagination Technologies.

Rather than 16 EUs in the Ivy Bridge GT2 configuration (HD 4000), Bay Trail’s HD Graphics core ships with 4. The 4 EUs are otherwise effectively identical to what we found in Ivy Bridge. The GPU can dynamically scale frequency and share power between itself and the CPU cores. Minimum GPU frequency on Bay Trail is 311MHz and a max GPU frequency of 667MHz (or 688MHz for the DDR3L SKUs).

Intel is quick to point out that Bay Trail’s GPU supports DirectX 11 and OpenGL ES 3.0. Unfortunately this support list appears limited to Windows. Under Android, it’s unclear whether or not Bay Trail will ship with anything above OpenGL ES 2.0 support. The same goes for GPU accelerated Renderscript. Bay Trail supports up to 2560 x 1440 displays over eDP1.3/DP1.2, or 1080p over HDMI. Panel Self Refresh is also supported. 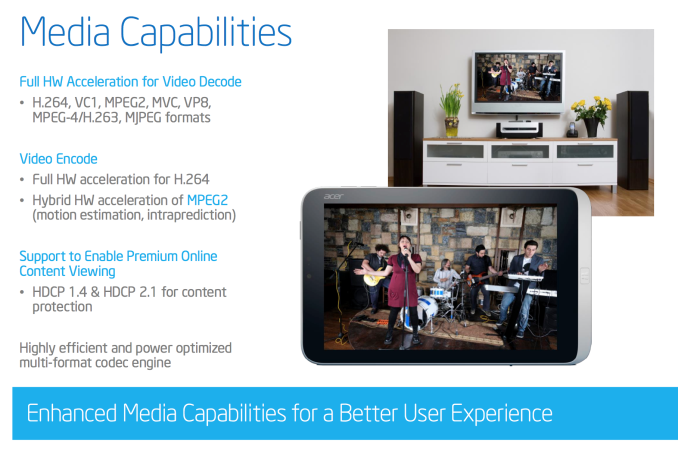 Video encode and decode blocks also shifted away from Imagination in Bay Trail. Both IP blocks are custom from Intel now. The ISP (Image Signal Processor) is from Silicon Hive (an Intel acquisition).