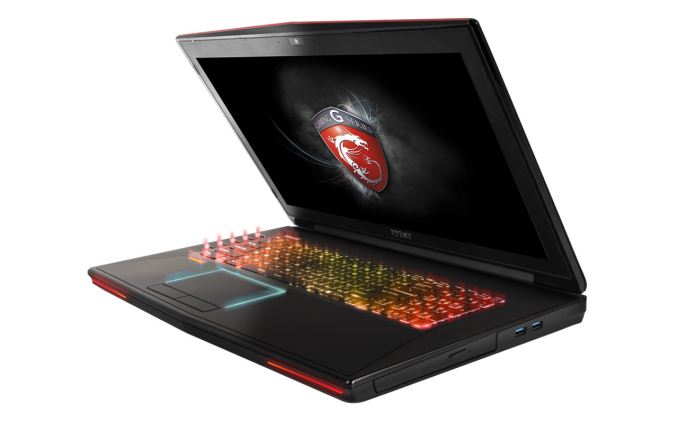 As noted in the conclusion of our GTX 980M/GTX 970M launch article, we're going to be covering some of the notebooks that are being announced today in separate Pipeline pieces. MSI has the largest selection of notebooks, with four of their existing products receiving updates to support 980M/970M along with one all-new design, the GT72 Dominator. We'll start with the GT72 Dominator, as it's obviously the most interesting option. There are seven different models of the GT72 being offered, with varying storage, RAM, and GPU configurations. Here's a brief overview of the specs:

Fundamentally, there are two variants: the GT72 Dominator Pro comes with a GTX 980M while the GT72 Dominator comes with GTX 970M. All seven models come with some form of solid state storage (from 128GB with a single M.2 SATA SSD up to 1TB with four 256GB M.2 SATA SSDs in RAID 0), and they all include a secondary 1TB 7200 RPM hard drive. Pricing starts at $2000 for the GT72 Dominator with GTX 970M, while the top configuration tips the scales at nearly four grand ($3900) – obviously, the cost of four 256GB SSDs can add up. Finally, the NVIDIA GPUs seem to have twice the standard RAM on the GT72, so the GTX 970M comes with 6GB while the GTX 980M comes with 8GB GDDR5. These are clearly intended as high-end gaming systems, and the minimum price for a GT72 with GTX 980M is $2400, which will get you a Core i7-4710HQ, 2x8GB RAM, a 128GB SSD, and a Blu-ray burner (along with the other common features listed above).

Note that there have been some significant changes to the GT72 compared to the previous generation GT70 platform, though we haven't reviewed the GT72 (which launched last month) yet. MSI has reworked the chassis and motherboard to provide six USB 3.0 and two mini-DisplayPort 1.2 ports, and the new GT72 chassis also comes with dual cooling fans, which should address one of our biggest complaints with the previous GT70 design. Support for up to four M.2 SATA SSDs is also new. Needless to say, we're definitely looking forward to testing the GT72; MSI provided some photos of the GT72 in the gallery below.

Moving on, the GT60 and GT70 Dominator have also been updated with the GTX 970M (but not the 980M). The core differences from the new GT72 are easily summarized. GT70 provides four SO-DIMM slots but MSI only populates two of them on the new GTX 970M models. The SSDs are mSATA and you can get the GT70 with none, one, or two SSDs (and a 1TB 7200RPM HDD). In terms of I/O, there are two USB 2.0 ports, one fewer total USB ports, a VGA port in place of one of the mDP ports, and the chassis is a bit thicker and heavier. MSI doesn't mention multi-colored keyboard backlighting, so it looks like they're going with a standard white backlight. Finally, the AC adapter is only 180W for these models and the WiFi is a standard Intel 7260 module. As for the GT60, there's only one model and it matches the base model GT70 in specs, so it's basically a bit lighter and has a smaller display.

Wrapping up, the GS60 and GS70 have both been updated as well with support for the GTX 970M. There are six GS70 models coming out and four GS60 models, with the GS60 having two 3K variants. The base model on both comes with 12GB RAM and a 3GB GTX 970M and a 128GB SSD; all of the other models have 16GB RAM, but there are options with 3GB VRAM and 6GB VRAM. The GS60 only supports two M.2 SATA SSDs while the GS70 can support three mSATA SSDs, and the top configuration of the GS70 comes with 768GB of SSD storage. The display options on the GS60 trump the GS70, however, as you can get either a wide viewing angle (IPS or similar) 1080p panel or a 3K IPS panel, while it appears the GS70 only has a standard 1080p display – the same display used in the GT70/GT72 most likely.