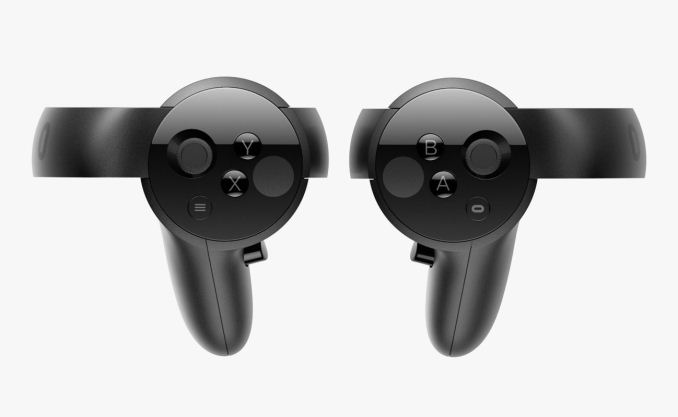 Back when the Oculus Rift and HTC Vive VR headsets launched earlier this year, one of the main differentiating features was the inclusion of touch/motion controllers. The Rift was launched with a focus on seated gaming, while Valve & HTC opted to focus on motion control and room scale gaming. As a result while the headsets were quite similar, their pack-in hardware was different; the Rift shipped with an Xbox One controller, while the Vive shipped with its two motion controllers and supporting Lighthouse sensor hardware. This also led to a notable difference in price, with the Rift launching at $599 while the Vive launched at $799, essentially putting a $200 price tag on motion controls.

However even before the Rift launched, Oculus already had plans in the works for their own motion controls. Dubbed the Oculus Touch, the handheld sensors and supporting hardware wouldn’t be ready for the launch, but instead would be launching as an add-on to the Rift later this year. Now at Oculus’s latest Connect event, we finally have the full details on the Oculus Touch launch, and how the system will work.

The Oculus Touch controllers will be hitting the market right before Christmas, shipping in volume on December 6th, while preorders are starting on Monday, October 10th. The Touch kit, which includes the two controllers, two pack-in games – VR Sports Challenge and The Unspoken – and one extra camera (or as Oculus calls it, the constellation sensor) will sell for $199. Given that this has long been the assumed price of the Oculus Touch kit, there shouldn’t be any surprises here.

With that said, Rift owners looking to do room scale gaming will want to pay attention to the technical details here, as they matter quite a bit. As Oculus notes, even though the second camera improves the system’s ability to track the headset and controllers, unlike the Vive’s Lighthouse system, two cameras won’t be enough for room scale. The experience you get out of the box with the Oculus Touch system will depend on how you position the cameras – there are multiple options available – but even in a diagonal setup for 360 degree tracking, the play area won’t be large enough to be room scale as defined by the Vive. Instead, for true room scale gaming a 3rd camera is required, which Oculus will sell separately for $79, bringing the price of a complete headset and room scale kit up to $879.

Given what’s known about Oculus’s constellation system, that they can’t pull off room scale with only two cameras isn’t too surprising; the cameras just don’t have the right combination of FOV and range to do it with two. To that end, launching the Touch with only one extra camera seems to be a calculated risk, with Oculus betting that most users are primarily after motion controls will be fine with gaming on a smaller scale – on the order of a few feet by a few feet – as we experienced first-hand with the prototype Touch hardware back in March. Otherwise true room scale can be done thanks to the third camera, albeit at an additional price.

Finally, along with today’s launch reveal, Oculus has also confirmed that 35 games will be Touch-enabled in time for the hardware’s launch in December. On a personal note, I’m interested in seeing what the end-user feedback is on the Touch controllers. Oculus has gone in a very different direction than HTC/Valve on the form factor of the controllers – using what amounts to two halves of a gamepad instead of two wands – so I’m curious to see how that compares to the wands over long-term use. The Vive system essentially senses the end of the wand, whereas the Oculus system needs to sense the markers wrapped around the hands, so it’s a small but potentially important difference in how user interaction will work and feel.