Perhaps the biggest aspect of NVIDIA’s gamble on ray tracing is that traditional GPUs just aren’t very good at the task. They’re fast at rasterization and they’re even fast at parallel computing, however ray tracing does not map very well to either of those computing paradigms. Instead NVIDIA has to add hardware dedicated to ray tracing, which means devoting die space and power to hardware that cannot help with traditional rasterization. 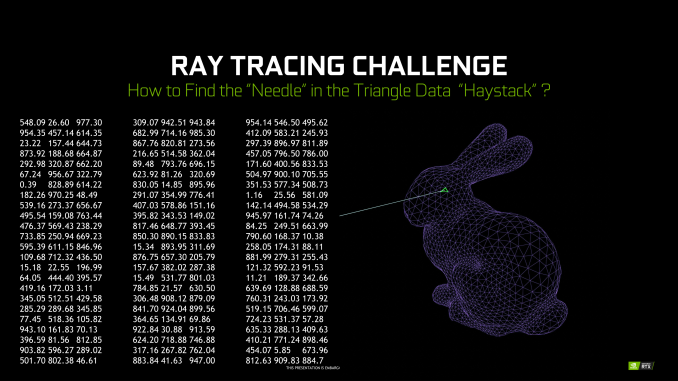 A big part of that hardware, in turn, will go into solving the most basic problem of ray tracing: how do you figure out what a ray is intersecting with? The most common solution to this problem is to store triangles in a data structure that is well-suited for ray tracing. And this data structure is called a Bounding Volume Hierarchy. 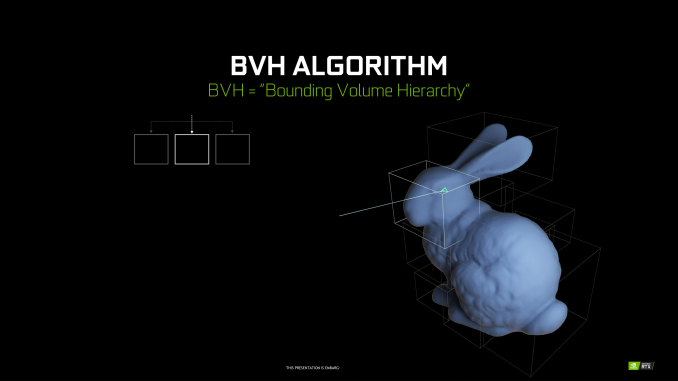 Conceptually, a BVH is relatively simple – at least for the purposes of this article. Rather than testing every polygon to see if a ray interacts with it, the idea is to test a portion of a scene to see if it interacts with a ray, and then keep drilling down. If there is an intersection with that portion of the scene, then subdivide it into smaller portions and test again. And again. And again. All the way until you reach the individual polygon, at which point the ray testing is resolved. 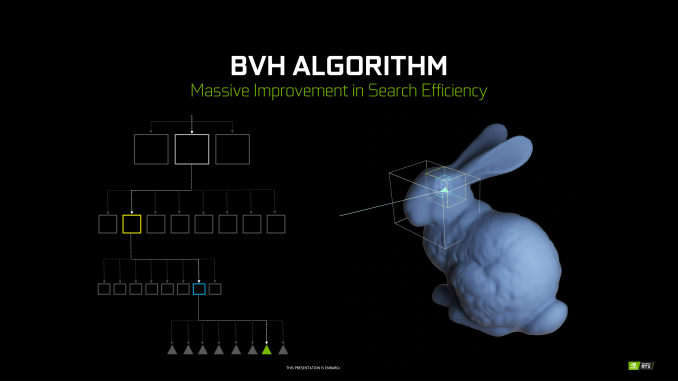 For the computer scientists in the crowd, this might sound a lot like an application of a binary search, and it is. Each test allows for a significant number of options (in this case polygons) to be discarded as possible answers. This gets to the right polygon in just a fraction of the time. A BVH, in turn, is stored in what’s essentially a tree data structure, with each subdivision – called bounding boxes – stored as children of their parent bounding box.

Now the catch with BVH is that while it radically cuts down on the amount of ray intersection needed compared to a naïve implementation, it’s still not super cheap. A number of tests are still required for each ray, with both successful and failed tests adding to the total number of tests taken. And all of this is for a single ray, when a significant number of rays are going to be needed for each pixel. Which is why hardware acceleration of the process is so important (and not at all easy).

The other major computational cost here is that BVHs themselves aren’t free. One needs to be created for a scene from the polygons in it, so there is an additional step before ray casting can even begin. This is more a developer concern – when can they modify and reuse a BVH versus building a new one – but it’s another step in the process. Furthermore it’s an example of why developer training and efficient engine implementations are so crucial to the process, as a poor implementation can make ray tracing much too slow to be viable.

Ray Tracing 101: What It Is & Why NVIDIA Is Betting On It The Turing Architecture: Volta in Spirit
Tweet
PRINT THIS ARTICLE
Comments Locked