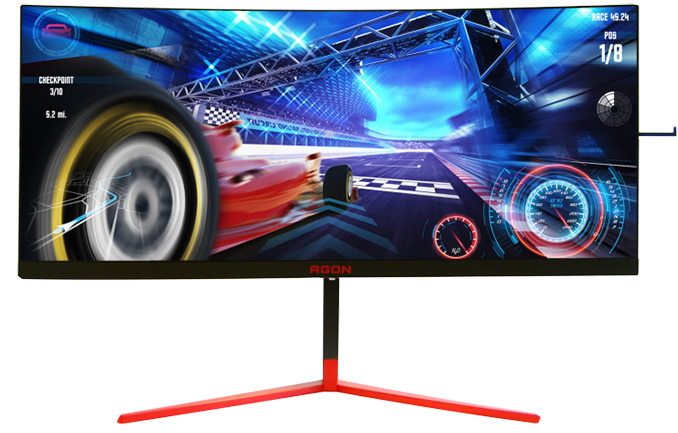 AOC is working on its new flagship display aimed at demanding gamers. The new Agon 35-inch ultra-wide display will not only feature a 200 Hz variable refresh rate, but also peak brightness of 1000 nits. The monitor will carry VESA’s DisplayHDR 1000 badge and will cover 100% of the DCI-P3 color space.

The AOC Agon AG353-series displays will belong to the company’s third generation premium gaming monitors that will tend to improve key qualities of monitors designed for demanding as well as hardcore gamers. Traditionally for the segment, the new LCDs will attempt to bring together large sizes, high refresh rates, high brightness, as well as technologies like AMD’s FreeSync 2 HDR or NVIDIA’s G-Sync HDR.

The Agon AG353-series monitors will rely on a 35-inch curved VA panel featuring 3440×1440 resolution, 1000 nits peak brightness in HDR mode, a 2000:1 contrast ratio (a bit lower than what you come to expect from a VA panel), a 1 ms MTRT response time (4ms GtG), and a 200 Hz maximum refresh rate. The displays will carry the DisplayHDR 1000 badge, so they will support at least HDR10 transport. Furthermore, they are promised to cover 100% of the DCI-P3 color space, which is something that not every IPS-based LCD can do.

AOC plans to offer two versions of the Agon AG353-series monitors: the AG353UCG featuring NVIDIA’s G-Sync HDR as well as another one supporting AMD’s FreeSync 2 HDR. The key differences between the two will be scalers approved by AMD or NVIDIA as well as certification from the GPU developers. The G-Sync HDR version will feature a 512-zone Full Array Local Dimming backlight. 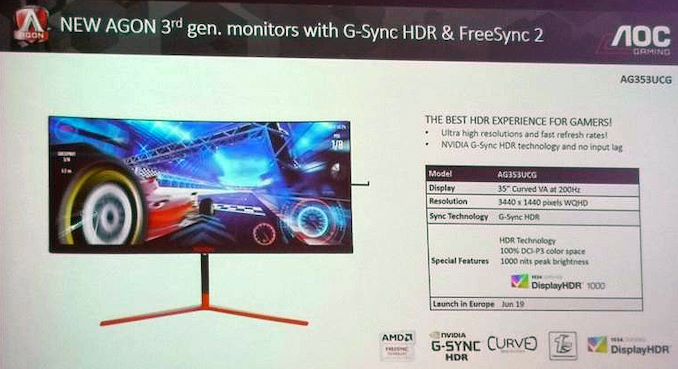 According to TFTCentral, the device will support HDMI 2.0, DisplayPort 1.4, and come with 2x8 W speakers. A four port USB 3.1 (5 Gbps) is also provided.

AOC disclosed at a media event that its G-Sync-supporting Agon AG353-series displays will hit the market sometimes in June, 2019. MSRP of the product is unknown, but we are dealing with a premium monitor and therefore it will be priced accordingly.