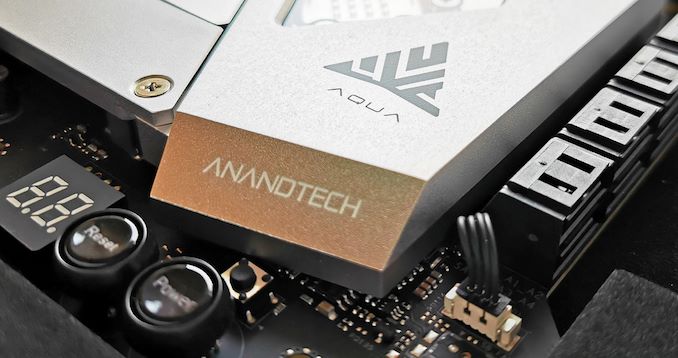 One of the most important aspects surrounding performance on AMD's Ryzen 3000 series is temperature. It is no secret that the AMD 7nm chips run somewhat warmer than previous generations, but the unique ASRock X570 Aqua looks to shake things up. The ASRock X570 Aqua features a full-cover aluminium and copper water block cooling the power delivery, CPU socket, and the X570 chipset all at once, and can be integrated into custom water cooling loops. There are plenty of promises made with this super halo product, and so we've put it through our testing.

But what exactly do you get with a super halo motherboard? 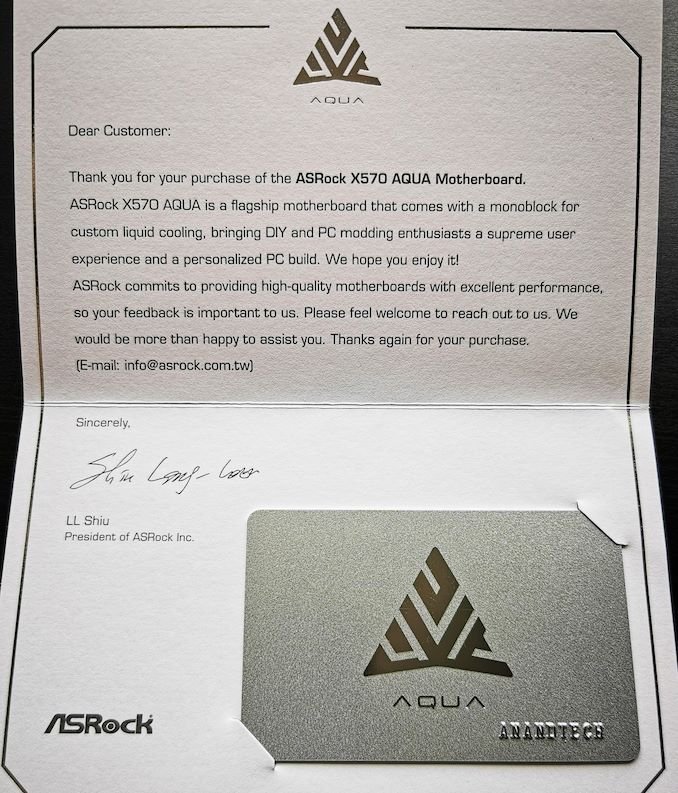 The X570 Aqua is a limited edition product from ASRock, designed to go to only the most dedicated and pocket-deep PC builders. In all honesty, we expect most of them to go to money-no-object users or PC builders wanting to showcase their building skills (that includes system integrators who want something special for their shop floor). None the less, at a whopping $999, there's got to be some goodies. A special AQUA-owners card is one of them. 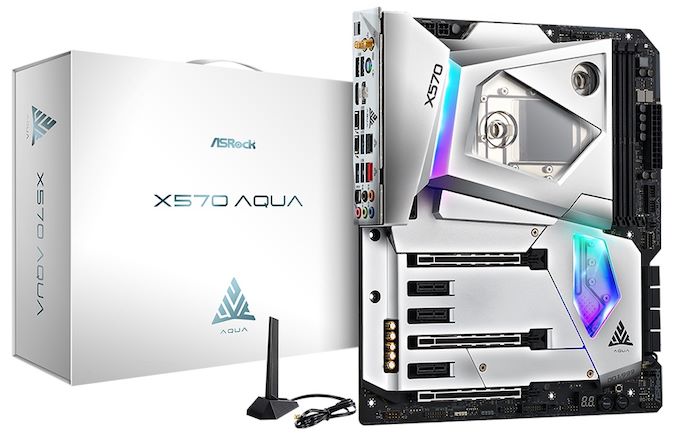 When at a retailer showing off its wares, it would be hard to miss the ASRock X570 Aqua with a 'sleek and robust' full cover aluminium armor, with a trifecta of copper water blocks shaped into one unique and custom liquid cooling solution. The aluminium Aqua cooling armor is designed to keep the power delivery, the processor, and the X570 chipset cool, but with added stylings due to integrated addressable RGB LEDs. Due to the full cover aluminium armor with copper blocks, it makes this board weigh a considerable amount, but that's a trade-off from using a quality material over waves and waves of plastic. The two connections to hook up the water block are G1/4 thread which is the most commonly used fitting type.

We partnered with Corsair and their HydroX to build a system with the Aqua, and ASRock also sent us a 5700XT Taichi to partner with it. We have a build log for that coming in due course, but here's what we put together. The RGBs aren't synchronized quite yet! 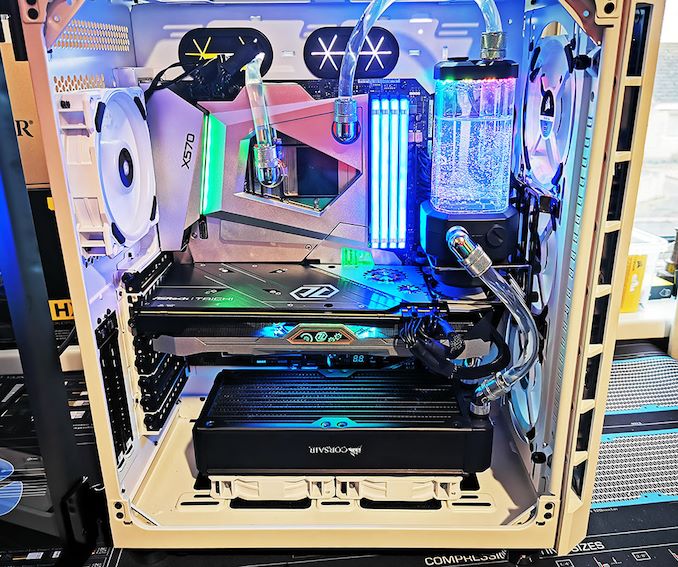 The PC we built with the Aqua with some help from Corsair: A Build Log coming soon

Behind the waterblock is a very high-end motherboard. The power delivery on the ASRock X570 Aqua is using a 14-phase setup with an International Rectifier IR35201 6+2 PWM controller, with the CPU section reliant on doublers, suitable for any 16-core CPU. We also get an Aquantia AQC107 10 GbE network port, with a supplementary Intel I211-AT Gigabit port which provides users with dual Ethernet on the rear panel. 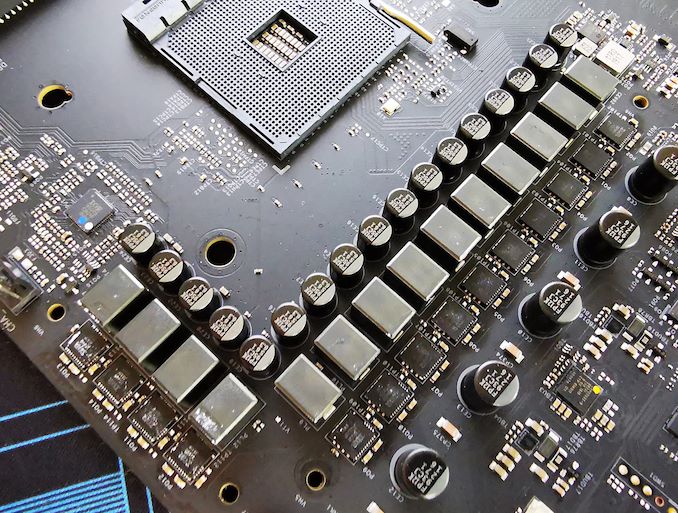 Also featured is an Intel AX200 Wi-Fi 6 wireless interface which provides both 802.11ax and BT 5.0 connectivity. ASRock has gone all out with its X570 Aqua by validating support for DDR4-5200 memory out of the box across its four available memory slots. This also allows users to install up to and including 128 GB. On the bottom section of the board is three full-length PCIe 4.0 slots which operate at x16, x8/x8, and x8/x8/x4. Sandwiched in between the full-length slots are three PCIe 4.0 x1 slots for users to install additional cards eg, dedicated sound cards, RAID, and networking controllers.

At the bottom right-hand side of the PCB is a two-digit LED debugger, a reset switch, and a power switch. Around the board is three 4-pin fan headers split between a CPU fan, a CPU/water pump, and chassis/water pump fan header. This will require users with lots of cooling fans to use splitter cables, a fan hub, or a dedicated fan controller. Onto the storage and the X570 Aqua has two PCIe 4.0 x4 M.2 slots which include individual heatsinks, and this model makes use of two ASMedia ASM1061 SATA controllers which allows the Aqua to include eight SATA ports; four from the ASM1061 controllers and four directly from the X570 chipset. This means that only the four from the X570 chipset feature support for RAID 0, 1, and 10 arrays. 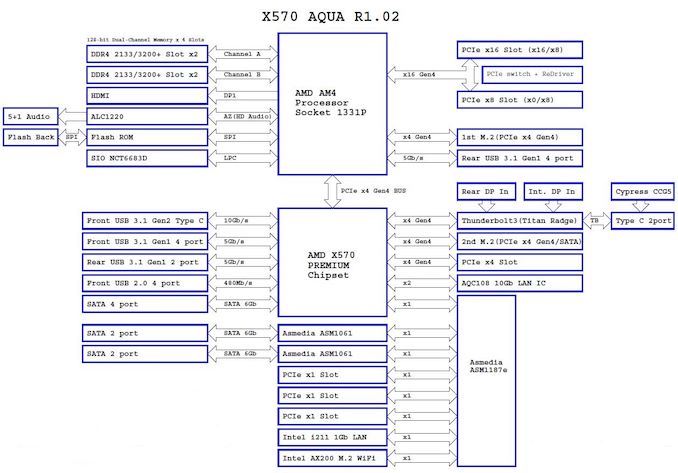 Another prominent feature of the ASRock X570 Aqua is on the rear panel with dual Thunderbolt 3 Type-C ports, with a further six USB 3.1 G2 Type-A ports. For users looking to make full use of the graphic output capabilities of the Thunderbolt 3 ports, ASRock has included a single DisplayPort 1.4 input which allows a link between a discrete graphics card and the ports for driving multiple 4K displays from a single video output. A Realtek ALC1220 HD audio codec controls the five 3.5 mm audio jacks and S/PDIF out on the rear panel, while a Texas Instruments NE5532 is included to improve the front panel audio with capabilities to drive headphones of up to 600 Ohms. 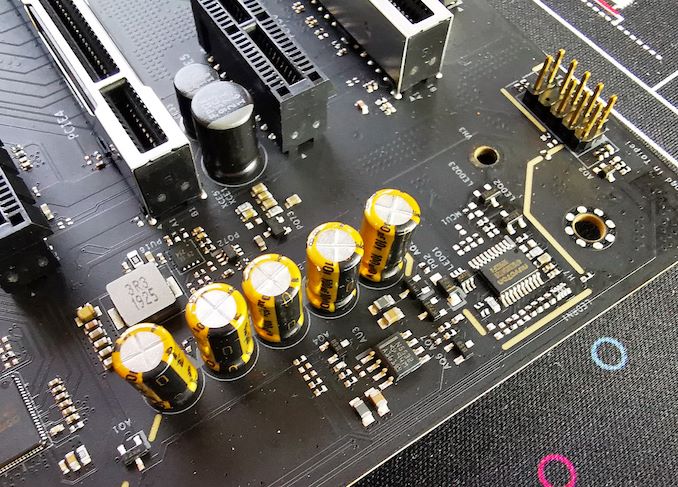 In our performance testing, the ASRock X570 Aqua was competitive on the whole, and this is something we have come to expect from ASRock. With our CPU, the power consumption figures were very reasonable with a maximum of 140 W at the wall under load in our Prime95 Blend test, which given all of the controllers onboard means that the board is more power-conscious than the MSI MEG X570 Ace or MSI MEG X570 Godlike. Booting into Windows was relatively quick and the results for the X570 Aqua sit in the middle-ground of our X570 results. The only result in our computational performance-related benchmarks came in our DigiCortex 1.20 benchmark. All the gaming and compute benchmarks were as expected.

Moving onto the overclocking performance of the ASRock X570 and our Ryzen 7 3700X performs well. ASRock doesn't include any preset overclocking profiles to work from, so all of the major overclocks need to be done manually. Looking at VDroop when manually overclocking and we see that ASRock at 1.250 V on the CPU VCore at 3.6 to 4.2 GHz performs exactly where we expected it to be with a consistent variation of 0.031 V from set to load value. At 4.3 GHz with a 1.350 V CPU VCore has less VDroop with a variation of just 0.019 V at full load. Our Ryzen 7 3700X processor doesn't like 4.4 GHz with any amount of CPU VCore at maximum load, although we did manage to POST into Windows 10 without issues; any notable load would crash the CPU. Also, ASRock includes the same Eco mode within the firmware which we saw with the ASRock X570 Phantom Gaming-ITX/TB3 model, but any attempt to place CPU load under Prime95 would instantly crash the system.

The ASRock X570 Aqua isn't for everyone and users looking opt for the monolithic E-ATX aluminium clad model will have to use a custom water cooling loop at the very least. This will add a further cost on top of the $999 premium ASRock is charging for its X570 Aqua, which will see just 999 be made available to the general public. As it stands there is no direct competitor with a monoblock unless GIGABYTE decides to release a version of its X570 Xtreme via an Aorus WaterForce model. The $999 price tag is not only impressive-looking, but it also includes 10 G, Wi-Fi 6, and dual Thunderbolt 3 Type-C outputs. One thing that also has to be factored into the price is exclusivity; there are only 999 units available for purchase. If this works well with the audience, then rarity would add a price premium. Of course, price is relative to what a user is willing to pay, but the overall package and presentation make the Aqua feel as high-end as the cost suggests. 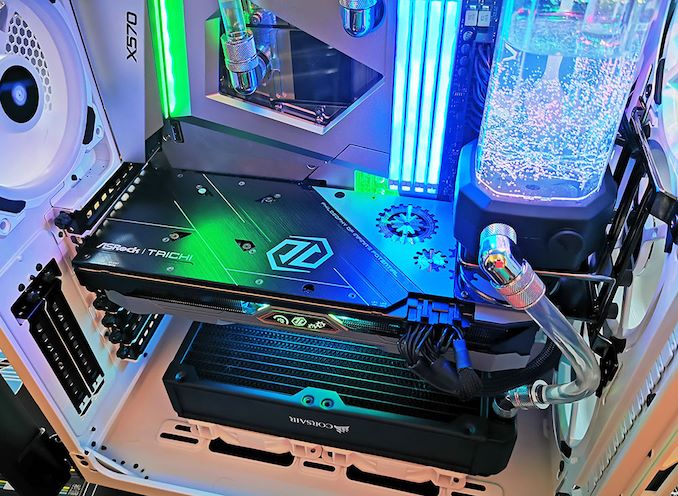 Ultimately those looking at the Aqua are going to be money-no-object users, or OEMs/companies wanting to build halo systems to show off their skills in system building. But, it doesn't mean we can't have some fun and analyse this thing. It may not be practical from the raw cost, but it does show that passion still exists in this industry.