AMD Moves From Infinity Fabric to Infinity Architecture: Connecting Everything to Everything

Another element to AMD’s Financial Analyst Day 2020 was the disclosure of how the company intends to evolve its interconnect strategy with its Infinity Fabric (IF). The plan over the next two generations of products is for the IF to turn into its own architectural design, no longer just between CPU-to-CPU or GPU-to-GPU, and future products will see a near all-to-all integration.

AMD introduced its Infinity Fabric with the first generation of Zen products, which was loosely described as a superset of Hypertransport allowing for fast connectivity between different chiplets within AMD’s enterprise processors, as well as between sockets in a multi-socket server. With Rome and Zen 2, the company unveiled its second generation IF, providing some more speed but also GPU-to-GPU connectivity. 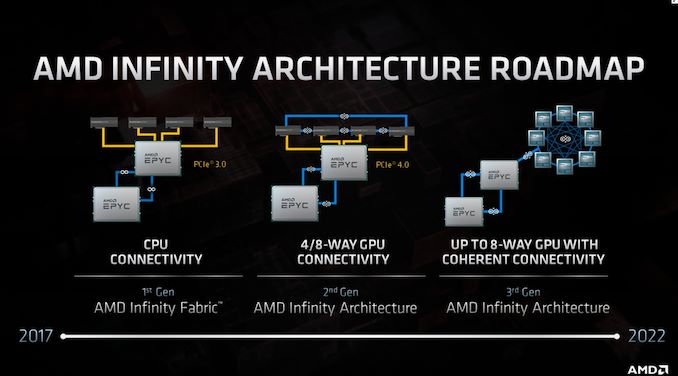 This second generation design allowed two CPUs to be connected, as well as four GPUs to be connected in a ring, however the CPU-to-GPU connection was still based in PCIe. With the next generation, now dubbed Infinity Architecture, the company is scaling it not only to allow for an almost all-to-all connection (6 links per GPU) for up to eight GPUs, but also for CPU-to-GPU connectivity. This should allow for a magnitude of improved operation between the two, such as unified memory spaces and the benefits to come with that. AMD is citing a considerable performance uplift with this paradigm. 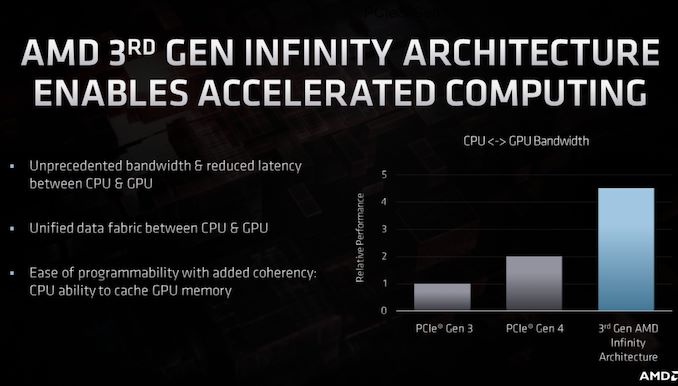 AMD and LLNL recently disclosed that the new El Capitan supercomputer will have the latest generation Infinity Architecture installed, with 1 Zen 4-based Genoa EPYC CPU to 4 GPUs. This puts the timeline for this feature in the ballpark of early 2022. 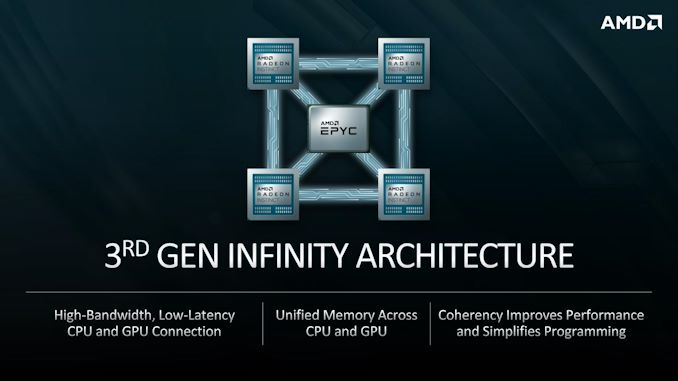 Gallery: AMD Moves From Infinity Fabric to Infinity Architecture: Connecting Everything to Everything
Tweet
PRINT THIS ARTICLE
Comments Locked