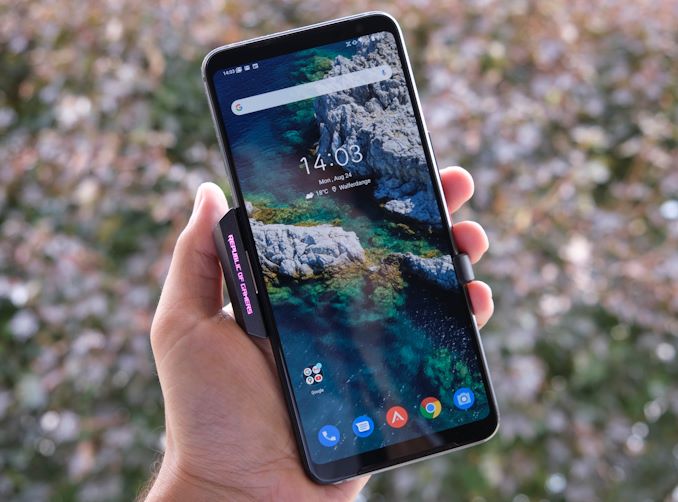 ASUS’s ROG Phones over the last few years have been devices of interesting differentiation, with the company delivering experiences that stood out from the crowd in one way or the other. This year, the new ROG Phone III doesn’t quite represent an as radical change compared to its predecessors, however ASUS makes some important upgrades and improvements to the popular gaming phone formula, updating the ROG3 to the newest Snapdragon 865+ SoC, introducing a 144Hz display, as well as most importantly, improving the every-day camera experience of the device.

This year, ASUS does things a little different in terms of model variants of the phone and their availability, releasing three SKUs with different price points ranging from 799€ to 1099€, with also differences going beyond the usual RAM+storage options as the SoC on the base variant also is different from its more expensive siblings. Let’s go over the spec sheet in more detail:

Starting off with the heart of the phone, the new ROG Phone III is amongst the very first devices on the market sporting Qualcomm’s newest Snapdragon 865+ processor, and this is one of the ways that ASUS wants to differentiate itself from other phone manufacturers at this relative late stage in the device cycle generation.

The new Snapdragon 865+ ups the frequency of the prime CPU core from 2.84GHz to 3.1GHz, making this the very first mobile chip to break the 3GHz barrier, and then some, and the ROG Phone III amongst the first phones to be able to claim this. Alongside the CPU boost, we’re also seeing a 10% GPU frequency increase to 670MHz on the part of the Adreno 650.

Interestingly enough, the lowest-end model of the ROG3 makes due without the Snapdragon 865+, instead using the regular 865 which had been deployed in other competitor devices throughout the year. This variant also has 8GB of RAM and has the smallest storage capacity at 256GB, but does come significantly cheaper at 799€, versus the next-tier model at 999€, but does offer 12GB of RAM and 512GB of storage. There’s also a 16GB RAM variant at 1099€, but availability is currently spotty and frankly there’s very little benefit from the extra 4GB. 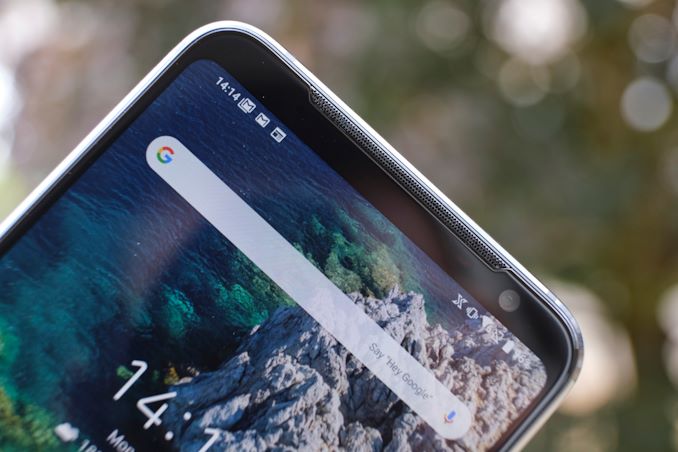 Design-wise, the ROG Phone III is very similar to its predecessor. On the part of the display, we’re still seeing a 6.59” 19.5:9 2340 x 1080 OLED display, and from the front of the device, you’d really struggle to see much of a difference to the ROG Phone II.

One area of improvement on the part of the screen is the addition of a 144Hz refresh rate option, as well as the raising of the touch controller sample rate from 240Hz to 270Hz. Generationally, these are relatively minor additions compared to the massive jump we’ve seen last year, but at least on paper it does give ASUS the slight edge in terms of specifications.

There’s no notch or punch-hole camera design here and that’s by design due to the phone’s two massive front-firing speakers that reserve quite a bit of bezel area at the top and bottom of the screen. 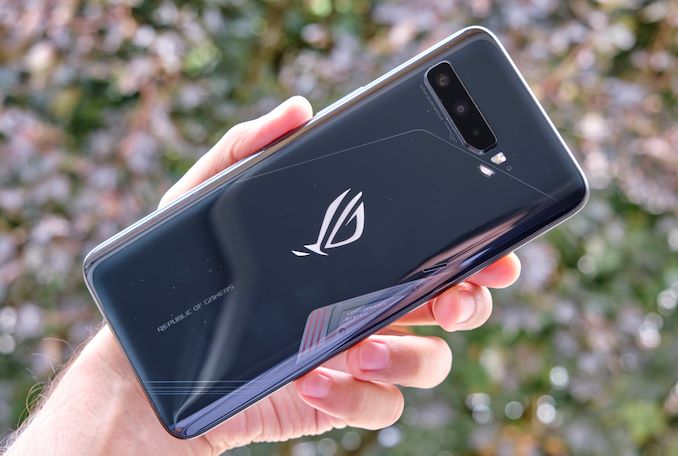 The back of the phone is also quite similar in design to that of the ROG2, with a few key adjustments. Key design feature still remains the phone’s ROG logo at the centre of the phone which has RGB backlighting that you can control from the software side.

The cameras this year are significantly improved: The main sensor has been upgraded to an 1/1.7” IMX686 with 64MP resolution, binning down to 16MP in regular shots. The optics have an f/1.8 lens assembly, with the big caveat that there’s no OIS available.

There’s also an ultra-wide 13MP camera module – which at least on paper seems to be the same as that of the ROG Phone II. It has an f/2.4 aperture and a 125° viewing angle.

Finally, ASUS added in a 5MP macro module as the third camera unit, but frankly as in many other phones this is relatively pointless and quite low quality. Luckily ASUS opted to use an auto-focus motor on the ZenFone 7 ultra-wide which can do double duty as a macro module there, but that doesn’t help the ROG Phone III too much. 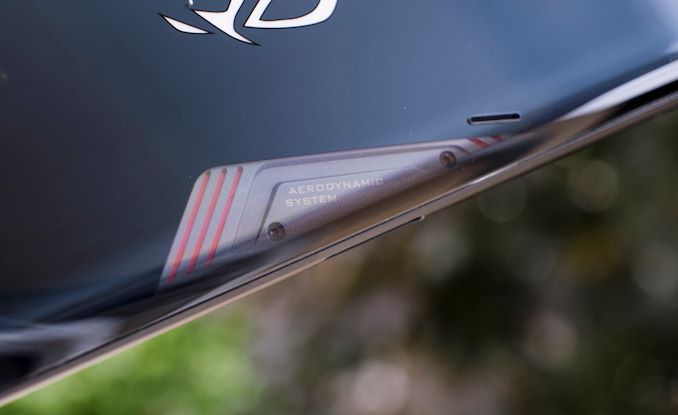 Last year the ROG2 had a metallic design element on the side of the phone, which this year has been redesigned, downsized, and now also housed underneath the back glass. The metal piece here actually acts as a heatsink and has thermal paste to it, bonded to the back of the motherboard behind the SoC, but exactly how this helps the thermal dissipation of the phone is a bit unclear given the glass panel above it.

There’s also a small cut-out above it that tries to be a cooling exhaust, but frankly again I think this is more of a design-aesthetic piece rather than something that actually helps with the cooling of the phone.

The ROG Phone III being a gaming-oriented phone, there’s some extra gaming-only features to it, such as the two extra trigger buttons on the right hand-part of the phone (top side in landscape). These are pressure sensitive buttons and allow for software mapping to configurable virtual buttons when in a game, more on that later.

At the bottom of the phone we find an off-centre USB-C port that’s capable of USB 3.1 transfer speeds. The location is likely due to the large front-firing speaker being in the way.  One huge negative of the ROG Phone III this year is that ASUS had dropped the 3.5mm headphone jack from the body, a functionality that’s now only available via the cooling fan accessory, which comes by default with the phone. 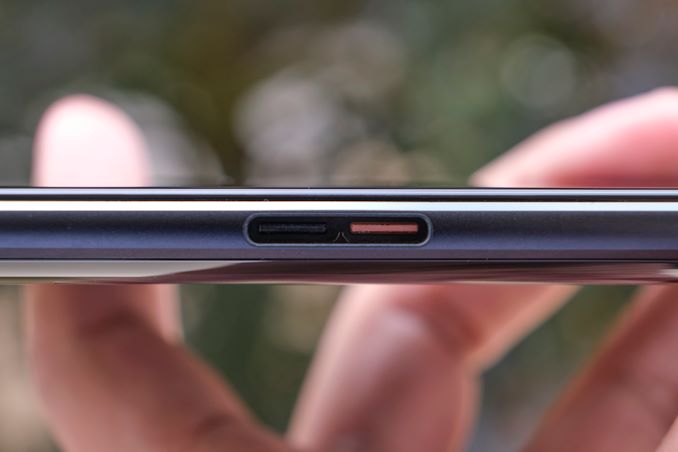 On the left side of the phone we find another USB-C port, alongside a “custom” port that serves as a proprietary accessory port. The black port is fully functional, but you’re not supposed to plug anything into the red port as the OS warns you against it.

Overall, the feel of the ROG Phone III is dominated by the fact that it’s just a very big phone. At 78mm width it’s wider than an S20 Ultra, and it’s 240g weight also makes it quite fat and heavy. Of course, that’s partly some of its allure as the internal 6000mAh battery is simply the biggest in the market in this flagship smartphone category.

Given the target audience of the phone ASUS is trying to cater to, I think there’s very little to criticise the ROG3 in terms of design and handling. The rest will depend on how it performs…