HighPoint Technologies has updated their NVMe RAID solutions with PCIe 4.0 support and adapter cards supporting up to eight NVMe drives. The new HighPoint SSD7500 series adapter cards are the PCIe 4.0 successors to the SSD7100 and SSD7200 series products. These cards are primarily aimed at the workstation market, as the server market has largely moved on from traditional RAID arrays, especially when using NVMe SSDs for which traditional hardware RAID controllers do not exist. HighPoint's PCIe gen4 lineup currently consists of cards with four or eight M.2 slots, and one with eight SFF-8654 ports for connecting to U.2 SSDs. They also recently added an 8x M.2 card to their PCIe gen3 family, with the Mac Pro specifically in mind as a popular workstation platform that won't be getting PCIe gen4 support particularly soon.

HighPoint's NVMe RAID is implemented as software RAID bundled with adapter cards featuring Broadcom/PLX PCIe switches. HighPoint provides RAID drivers and management utilities for Windows, macOS and Linux. Competing software NVMe RAID solutions like Intel RST or VROC achieve boot support by bundling a UEFI driver in with the rest of the motherboard's firmware. Highpoint's recent 4-drive cards include their UEFI driver on an Option ROM to provide boot support for Windows and Linux systems, and all of their cards allow booting from an SSD that is not part of a RAID array. HighPoint's NVMe RAID supports RAID 0/1/10 modes, but does not implement any parity RAID options. 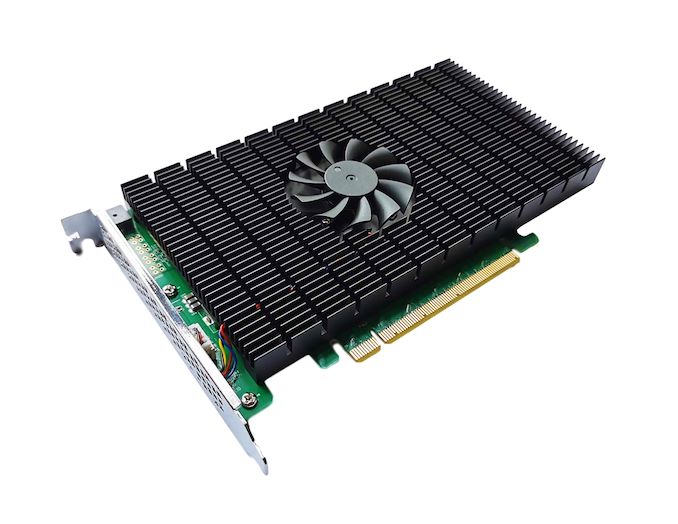 Highpoint has also improved the cooling on their RAID cards. Putting several high-performance M.2 SSDs and a power-hungry PCIe switch on one card generally requires active cooling, and HighPoint's early NVMe RAID cards could be pretty noisy. Their newer heatsink design lets the cards benefit from airflow provided by case fans instead of just the card's own fan (two fans, for the 8x M.2 cards), and the fans they are now using are a bit larger and quieter.

In the PCIe 2.0 era, PLX PCIe switches were common on high-end consumer motherboards to provide multi-GPU connectivity. In the PCIe 3.0 era, the switches were priced for the server market and almost completely disappeared from consumer/enthusiast products. In the PCIe 4.0 era, it looks like prices have gone up again. Even though these cards are the best way to get lots of M.2 PCIe SSDs connected to mainstream consumer platforms that don't support the PCIe port bifurcation required by passive quad M.2 riser boards, the pricing makes it very unlikely that they'll ever see much use in systems less high-end than a Threadripper or Xeon workstation. However, Highpoint has actually tested on the AMD X570 platform and achieved 20GB/s throughput using Phison E16 SSDs, and almost 28GB/s on an AMD EPYC platform (out of a theoretical limit of 31.5 GB/s). These numbers should improve a bit as faster, lower-latency PCIe 4.0 SSDs become available.

Now that consumer M.2 NVMe SSDs are available in 4TB and 8TB capacities, these RAID products can accommodate up to 64TB of storage at a much lower price per TB than using enterprise SSDs, and without requiring a system with U.2 drive bays. For tasks like audio and video editing workstations, that's an impressive amount of local storage capacity and throughput. The lower write endurance of consumer SSDs (even QLC drives) is generally less of a concern for workstations than for servers that are busy around the clock, and for many use cases having a capacity of tens of TB means the array as a whole has plenty of write endurance even if the individual drives have low DWPD ratings. Using consumer SSDs also means that peak performance is higher than for many enterprise SSDs, and a large RAID-0 array of consumer SSDs will have a total SLC cache size in the TB range.