Kicking off our Z690 overview in alphabetical order, we'll start with ASRock. ASRock includes its patent-pending ASRock Graphics Card Holder with all of its Z690 models. This is designed to help prevent sagging when used with heavier and long graphics cards.

As it currently stands, the most premium model in ASRock's arsenal for Z690 is from one of its most successful motherboards series, the Taichi. The ASRock Z690 Taichi has a variety of premium features including an advertised 20-phase power delivery with the latest 105 A power stages, as well as a slightly redefined look for 2021. Touching on the design, ASRock includes its mechanical cogwheel effect built into the rear panel cover, which includes RGB LED backlighting, with more RGB built into the cleverly designed cogwheel inspired chipset heatsink. 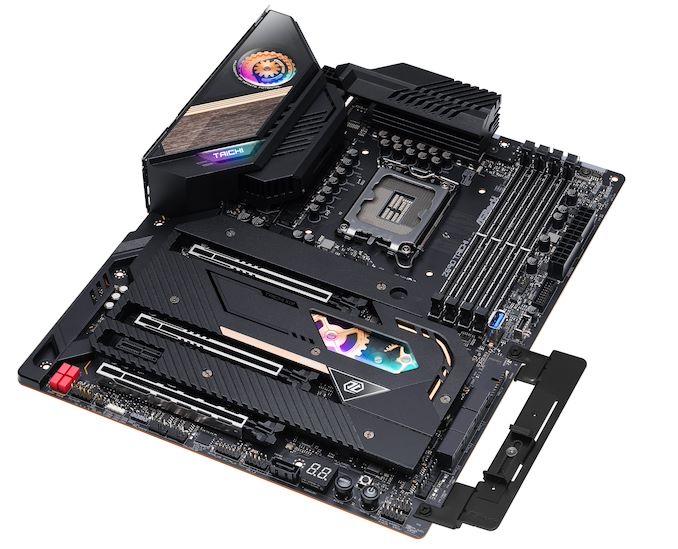 Looking at the lower portion of the Z690 Taichi, it includes three full-length PCIe slots, including the top two operating at PCIe 5.0 x16 and x8/x8, a third full-length PCIe 4.0 x4 slot, and one PCIe 3.0 x1 slot. Focusing on storage, the ASRock Z690 Taichi includes two PCIe 4.0 x4 M.2 slots, with a third M.2 slot that has support for both PCIe 3.0 x4 and SATA drives. The board also features seven SATA ports in total, with six of these supporting Intel RAID 0, 1, 5, and 10 arrays. Located in the top right-hand corner are four memory slots that can support DDR5-6400, with a combined capacity of up to 128 GB. 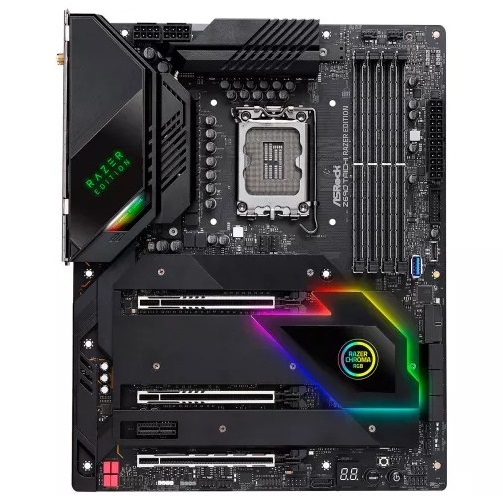 The ASRock Z690 Taichi Razer Edition shares the same feature set as the regular Z690 Taichi, but with a Razer-inspired twist. This includes a funky Razer Edition logo on the rear panel cover, with Razer Chroma RGB LED lighting which from the image above, pops really nicely. It drops the cogwheel theme of the Taichi and essentially replaces it with Razer branding.

On the rear panel of the ASRock Z690 Taichi is a pair of Thunderbolt 4 Type-C ports, with two USB 3.2 G2 Type-A, and four USB 3.2 G1 Type-A ports. Onboard audio is handled by a Realtek ALC1220 HD audio codec and ESS Sabre 9218 DAC pairing and consists of five 3.5 mm audio jacks and one S/PDIF optical output. Interestingly, ASRock has put the audio connectors in the middle of the rear panel, as opposed to the end. For networking, ASRock is using a Killer E3100G 2.5 GbE controller, with an additional Intel I219-V Gigabit controller, with a Killer AX1675 Wi-Fi 6E CNVi. Finishing off the rear panel is a single HDMI 2.1 video output and a small BIOS Flashback button.