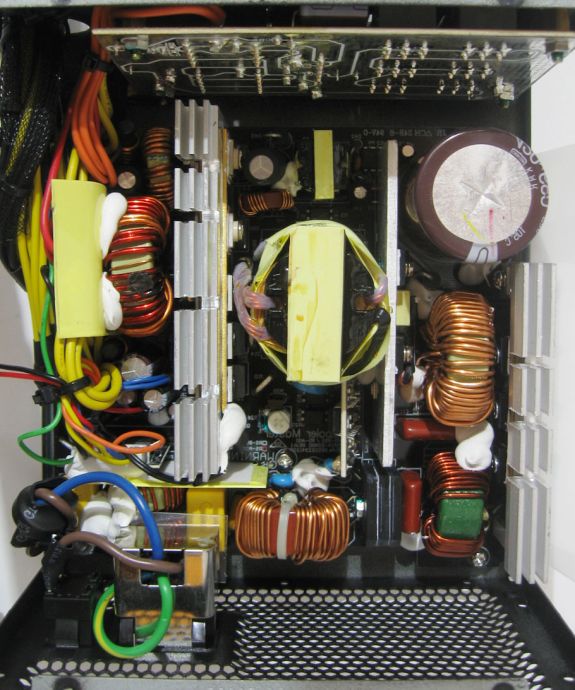 The distinctive protective foil on the input will clue some readersin: the electronics are manufactured by FSP. Notwithstanding the ODM, the configuration depends on what Cooler Master asks for, and this area shows some decent expenditures.

The EMI filtering consists of four Y- and four X-capacitors. Additionally two common mode chokes can be found, as well as a ferrite core, which is wrapped by phase and neutral cord. In contrast to many PSUs two linear chokes are used to compensate differential mode interferences. Not least we find an MOV. The power switch has been insulated with shrink tubing as it’s relatively close to the main PCB, but the highlight is neither the input-side filter nor the abundantly measured 680 µF filtering capacitor by Nippon-Chemicon (KMR, 105°C for 2000 hours until 20% of the capacity will be lost).

On the secondary circuit, where temperatures rise and space is scarce, high quality capacitors are used. We sometimes have discussed the usefulness of Japanese capacitors. When they are used sensibly in a high-end PSU, the choice will be a welcome one, and Cooler Master uses a good choice of Rubycon along with Nippon-Chemicon capacitors. This shows that Cooler Master doesn’t want to use the primary capacitor as an eye catcher and stint on the secondary side, but also uses high-grade parts there.

On +12V the Rubycon MBZ-series are used, which can be found on many motherboards but seem to harmonize quite well in power supplies. These are characterized by a low ESR (resistance), which resembles the losses in the capacitor. So low-ESR capacitors contribute their part to the general efficiency. On +3.3V and +5V mainly the YXG-model is used, which can take high ripple current and is specified for a lifespan of 6000 hours at 105°C. That are respectable qualities, which not only refer to these special components.

We often have pointed out that the weakest part limits the performance of the whole PSU and the quality of the capacitors is not the only feature that matters. The well-dimensioned rectifier bridges suit the well-dimensioned main capacitor and the EMI filtering suits the secondary setup. External as well as internal interferences are compensated by large filtering stages. Not least a Silicon Touch protection-IC is used, which offers OTP besides the usual functions and isn’t very common. Two measuring diodes check the temperature of the secondary heat sink and control the fan speed or shut down the PSU before the temperature gets too high.

But of course, good capacitors have their right to exist as well. Besides the quality, the number and presence of capacity is crucial to improving the voltage quality. On the cable management PCB, whose cables and connectors are soldered well, additional Nippon-Chemicon capacitors are smoothing the output voltage. We will see whether this can be noticed in our further measurements. The only point of criticism is a slightly loose PFC-choke as a point of hot glue was not set precisely enough.