Probably the big news, and the one that was mostly only being demonstrated behind closed doors, was Toshiba's Tegra 2-powered tablet. The prototype we were allowed to test was mostly in the final stages, featuring stereo speakers and a ten-inch 1280x800-resolution screen. Unlike Viewsonic's G Tablet, Toshiba actually opted to use a quality screen in their design: the prototype appeared to be an IPS panel with excellent viewing angles, although the rep couldn't confirm whether or not that would be the panel in the final design. 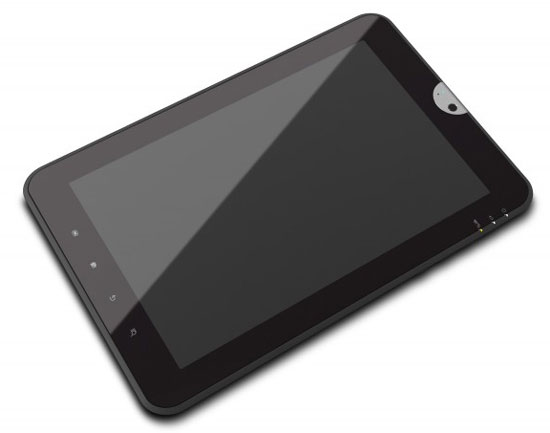 Connectivity on the tablet is fairly copious, too: headphone and microphone jacks come standard, along with a full size HDMI and full size USB 2.0 port. There's also a mini-USB 2.0 port, along with a docking port at the bottom of the tablet; the bottom is one of the wide sides, as the tablet seems to be designed primarily for use in landscape mode. The face of the tablet features a two megapixel camera while the rear-facing camera is five megapixels. Finally, the whole thing is attractive and simple, with a rubberized removable back that hides a user-replaceable battery good for an estimated seven hours of running time when playing back 1080p video.

Unfortunately, the software side is still very much in the prototype stages, and the unit we were able to play with was only running Froyo and had little in the way of software installed. Toshiba says they're going to go for as clean an Android experience as possible, but will be including file management software as well as customized video-scaling software that seems to bump up contrast and slightly upscale lower-resolution video. The final release tablet will also be running Honeycomb.

The other major prototype being shown was a notebook featuring a 15.6-inch lenticular display that, when calibrated, produces a three-dimensional image without the need for wearing glasses. "When calibrated?" Yes, and this is the real secret sauce in Toshiba's implementation. Software built into the notebook uses the webcam to try and determine where your eyes are, and then the display adjusts its viewing axis to compensate, largely removing the "sweet spot" issue with glasses-free 3D displays.

It looked good, but not great. The effect is generally solid, but I noticed some flickering on edges, and if you move too quickly the webcam (and thus display) has trouble recalibrating. They did actually show in a separate window how the software detected the viewer's eyes, and it was remarkably accurate. As I moved my head back and forth, the wireframe outline followed very closely, and the image recalibrated in kind. Mercifully this is a fairly early prototype (the retail model is likely to not be available until at least Q3 2011), so odds are good the kinks can be worked out of the technology in time.

While Toshiba was happy to show off fancier notebooks (and we'll hopefully be getting a Qosmio in for review in the near future), one of the more compelling options was their most basic budget model. A 15.6" notebook with a suggested retail price of just $449, their lowest end E series uses AMD's Fusion APU, replacing the older V120 model processor. Toshiba remarked that the difference in battery life between the two was more than they'd hoped for, with the older V120-powered notebook posting nearly four hours of running time while the Fusion-powered refresh was able to push six. More processing power, better graphics, and better battery life? Maybe there's a good reason Fusion's been running wild at CES.