Now that we've been getting a fairly steady influx of desktop machines from boutiques, Origin PC is stepping into the ring by sending us their go-to flagship model, the Genesis. Origin is a boutique founded by former Alienware executives, and is relatively young compared to some of the other companies we've reviewed towers from. The Genesis is almost more of a brand than a flagship, but Origin is opting to put one of their best feet forward by sending us a configuration they're sure will do them proud against the competition.

After our pit stop with the iBuyPower LAN Warrior II, we're now back firmly in the realm of boutique desktop gaming towers. I should've known better when Kevin Wasielewski, the CEO, mentioned in his e-mail for me to contact him when the tower arrived with my thoughts on the packaging. Please try to ignore the mess, questionable taste in film, and mountain of additional hardware in the background needing my time and attention and get a load of this: 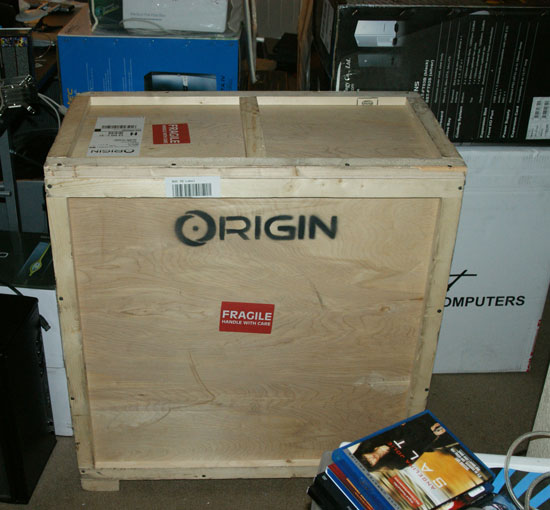 As I mentioned in the last review, I'm not a large man by any stretch of the imagination. So when the delivery man arrived in the morning and knocked on my door and asked me to help him bring a wooden crate up, I was understandably surprised. For scale, that's an Antec Mini P180 on the floor to the left of this 86 pound monstrosity. And what's inside? 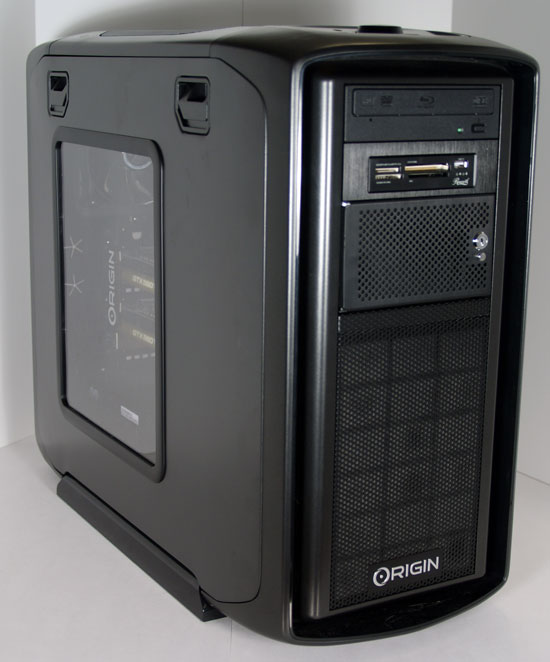 As the proud owner of a Corsair Graphite 600T (the same case this Origin Genesis was built in), I can tell you that the packaging was decidedly American and absolute overkill, and I would've been more amused by it had I both the space and upper body strength to contend with it constructively.

Now that Intel has begun shipping fixed P67/H67 chipsets in earnest, Sandy Bridge is all over the place in boutique builds, and Origin's Genesis is no different. It sports an Intel Core i7-2600K, the weapon of choice for pretty much everyone these days, with a healthy overclock of 4.5GHz. Origin advertises being able to push this chip over 5GHz and given what we know of i7-2600K overclocking that doesn't seem entirely unreasonable, though you'll pay for the privilege. They keep the processor cool with an Asetek 570LC 120mm watercooling kit.

The other major player in the Genesis is the pair of EVGA GeForce GTX 560 Ti cards running in SLI. These cards both feature a mild overclock to 850MHz on the core, 1.7GHz on the 384 shaders, and 4.1GHz on the GDDR5 attached to a 256-bit memory bus. A pair of 1GB GTX 460's in SLI was (and to an extent still is) a price/performance king, and the two 560's hopefully should build on that.

Finally, everything is housed in Corsair's Graphite 600T, a case we've had the privilege of reviewing in the past, and powered by a respectable Silverstone 750-watt power supply. The 600T is no stranger to water cooling, but we'll see that not everything here is quite as good as it could be. Origin is also in a privileged position with Corsair and as a result are among the first to get their hands on the new windowed side panel which they make use of by illuminating the internals with strips of white LED lights.

What you'll want to notice are two components that aren't immediately available on the configuration page of Origin's site: the Corsair Graphite 600T and the SATA hot-swap bay. Origin will build systems by request in other enclosures, and the hot-swap bay becomes an option they can add alongside using the 600T.