This promised to be a good month for big stonking enthusiast-class cases, and we're delivering on the second half of our one-two punch with Thermaltake's monstrous Level 10 GT. This is the biggest, most expensive enclosure we've reviewed to date. It was one of the major centerpieces of Thermaltake's line-up back at CES, and later it showed up housing one of the most powerful gaming systems we've ever reviewed, the CyberPowerPC Gamer Xtreme FTW. Today we get to take a look at the Level 10 GT on its own and pit it against the best and brightest we've been sent so far. 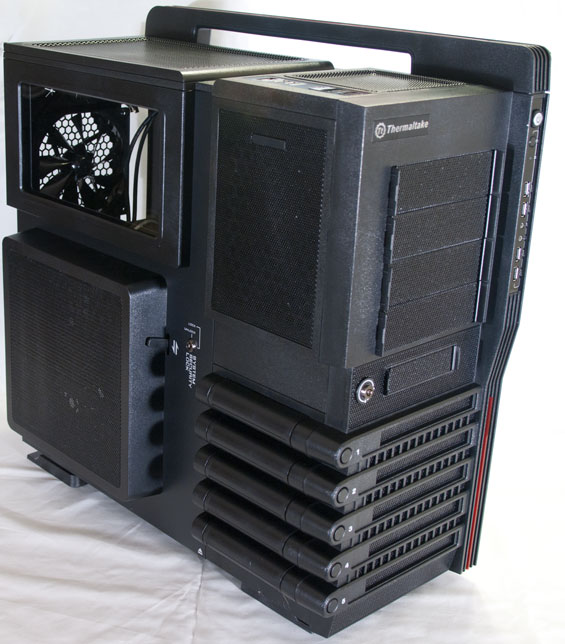 When I reviewed the CyberPowerPC unit back in May, I found myself with some reservations regarding the Level 10 GT. A great many of those were ameliorated when I went to actually test that tower and found it to be a remarkably capable enclosure, able to dissipate the heat generated by a pair of GeForce GTX 590s and a massively overclocked Intel Core i7-990X without creating too much of a racket. At the very least on that front it seemed like it would be a winner, and spoiler alert: it is.

Within that review I stated that I'd come back and review the Level 10 GT on its own merits, and that's on the docket today.

From the stats it's pretty easy to tell: the Level 10 GT is big. Off the cuff it looks like it retains a lot of the design and compartmentalizing cues from the original (and comically expensive) Level 10, but as we get into the review you'll see the Level 10 GT is really a very different beast.