Earlier reports of the device now known as the Kindle Fire have varied wildly and with speculation rampant about what Amazon might announce the finished product appears to fall nicely in between the greatest device ever and a serious disappointment. We'll begin with pricing. Jeff Bezos, Amazon CEO, repeated one line more than any other during the event today, "premium products at non-premium prices." By pegging the Fire at $199 he certainly is following through on the latter claim. This undercuts even the Barnes and Noble Nook Color, while providing specifications that match devices more than twice it's price. So, bargain? You bet. 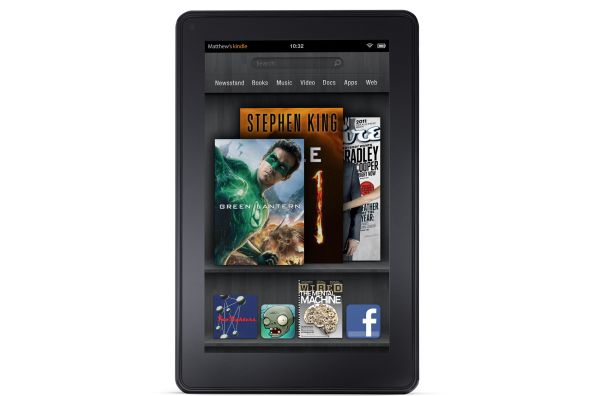 And what you get for that $199 is a stylish black device with a 7" IPS 1024 x 600 screen, and a 1 GHz dual-core ARM processor. At 11.4mm the Fire is thicker than other slates, but as we've discussed before, a thicker device can still be pleasant to hold, so long as the form factor works. Reports from gdgt's Ryan Block indicate that Quanta Computers, who designed the BlackBerry PlayBook, were responsible for the design of the Kindle Fire, and by all accounts they seem to have not strayed far from that design. Holding to that design may include using the same TI OMAP 4430 SoC, though we have yet to confirm that. What we can confirm is that at 413 grams, this is one of the lightest weight tablets we've seen.

Hardware isn't the whole store with the Fire, though. Amazon is selling a platform from which to experience it's various Amazon services, and it is leaving none of them from this party. Obviously, and this is the last mention of Android you'll find in this piece and their PR. For third party apps there's the Amazon Appstore. This will be the only official means by which buyers will be able to load their apps onto the device, though intrepid hackers will no doubt make quick work of the device. Amazon's MP3 store is on hand as well as Amazon's Kindle app and e-book store. This brings us up to apps, music, magazines and books. The addition of Amazon Prime Instant Videos rounds out the offerings with over 100,000 movies and TV shows from the likes of Fox, CBS and NBCUniversal. Buyers will be treated with an expanded WhisperSync service that now allows users to mark their place in movies and TV shows, as they already do with books and magazines. Amazon is even leveraging EC2, their web services provider to enhance the browsing experience with Amazon Silk.

The Kindle Fire is the first device to ship with Amazon's Silk browser. According to Amazon, Silk is a split-browser that leverages the company's EC2 cloud. The idea is simple: rather than simply going out and maintaining connections with all of the various servers that supply content for a single web page, Amazon will deliver as much of that as possible via its own cloud. The benefit of delivering content via Amazon's cloud is it minimizes the number of independent DNS lookups and handshakes the browser has to perform to load a single webpage, not to mention that Amazon's cloud should hopefully deliver more consistent performance due to the scale of its deployment.
Amazon is also doing some prediction in Silk. As Amazon's EC2 cloud aggregates usage data from Silk users, it can develop models for web page access patterns. The browser is then capable of prefetching what it thinks will be the next web page you click on based on historical data from a number of other users. I've always thought browser prefetching makes a lot of sense and it appears that Amazon is going to try to do some of that here with Silk.
Amazon's cloud can also deliver size optimized content depending on the device you're using. The example Amazon gives is a 3MB jpg that can be compressed to 50KB without you being able to tell the difference on a Kindle Fire. Silk will work with EC2 to determine the appropriate size of the image that it should send down to you.
Given that the Kindle Fire is WiFi only, I wonder how much of an impact Silk's network optimizations are really going to have on the overall experience - particularly on fast WiFi connections. Web browsing on mobile devices is still largely CPU bound and with the Kindle Fire shipping with (presumably) the same CPU power as a number of other Android tablets that bottleneck shouldn't really change because of Silk.
We also don't know anything about Silk's underlying parsing and rendering engines. As Google has shown us, web page rendering performance depends just as much on software as it does hardware. Amazon is addressing the network part of the problem with Silk but there are also CPU and software issues that are either unchanged or big unknowns at this point.
A $79 Kindle! And Wrap-up
Tweet
PRINT THIS ARTICLE
Comments Locked