Going from making good motherboards to going head to head with Samsung for Google's affection is a pretty big step for ASUS, but it's one that the company has taken and done very well with. None of its peers have made the same transition, especially not while continuing to thrive in their existing businesses. I don't think anyone can say that ASUS' motherboards have suffered over the past several years as the company has transitioned, much like Apple, into the world of being a mobile computer manufacturer.

ASUS' first Android tablet was a knock out of the park. The original Eee Pad Transformer gave us a glimpse of the future with its keyboard dock while delivering a good Honeycomb experience for $100 less than the competition. As many sacrifices as ASUS had to make to reach its price point, the original Eee Pad remains one of the best Honeycomb tablets on the market. But the show must go on and simply being the cheapest on the block doesn't work anymore, particularly with companies like Amazon redefining what cheap means. It was time for a new flagship and today we have that tablet: 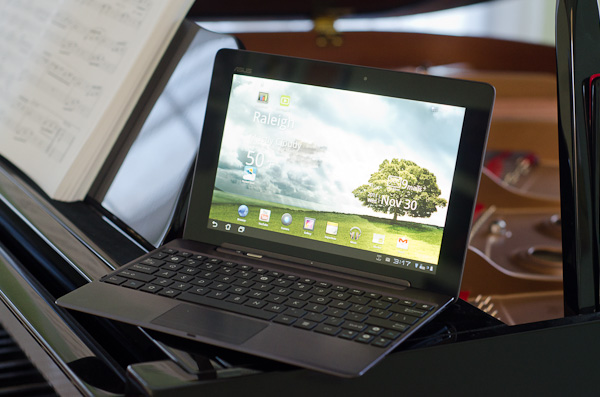 Priced at $499 the Eee Pad Transformer Prime will be available in North America during the week of 12/19.

Whereas Motorola was first out of the gate with a Tegra 2 based Honeycomb tablet, ASUS is done with playing second fiddle. ASUS is NVIDIA's first and only launch partner for its new quad-core Tegra 3 SoC. The Google OS of choice is still Honeycomb, although I hear the Eee Pad Transformer Prime also happens to be Google's development and validation vehicle for Ice Cream Sandwich on Tegra 3. 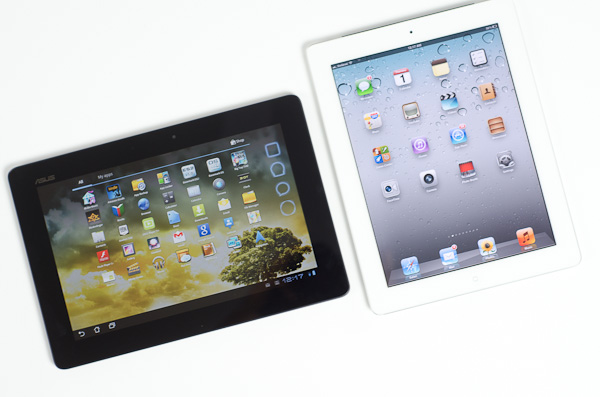 The Prime is everything the original Eee Pad Transformer was missing. It's thinner than an iPad 2 or Galaxy Tab and built out of aluminum and glass. Other than minor details like the buttons and connectors, your hands never touch plastic when using the Transformer Prime. Even those plastic buttons look and feel great. The tablet is just beautiful. It echoes the design language of ASUS' Zenbook, but without the disappointment in the panel department. ASUS' latest tablet actually has the best display of any tablet we've reviewed, including those made by Apple and Samsung (more on this later). 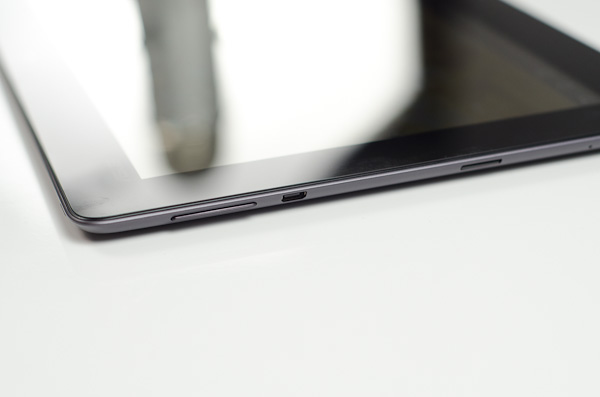 The usual suspects are carefully placed around the perimeter of the Transformer Prime. Held in landscape mode the power/lock button is at the top left corner, with the volume rocker perpendicular to and just below it on the left side. Also along the left side is a micro HDMI output for display cloning and a microSD card slot. A standard 1/8" headset jack finds itself on the right side of the tablet, and ASUS' standard dock connector is bottom center. The original Eee Pad had two speaker grills, while the Prime has a single, larger speaker on the back of the device. Audio output is surprisingly full but the tablet doesn't get loud enough to overpower a noisy environment. 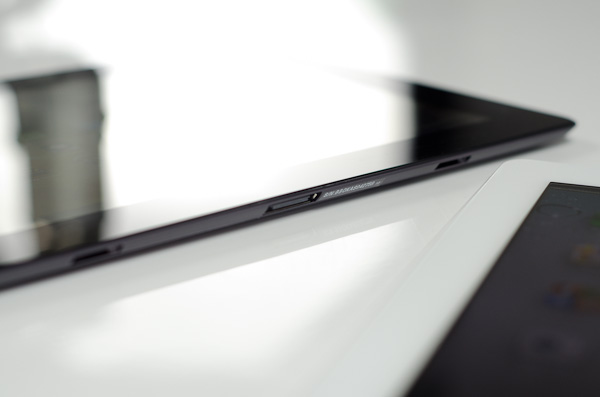 ASUS went a little crazy with the rubber stoppers all over the Prime. The dock connector and its two mechanical retention/secure points are plugged with these things, as is the USB port on the optional transformer dock.

Just like last time, the Eee Pad Transformer Prime can be mated to an optional keyboard dock for an extra $149. The dock adds a QWERTY keyboard, trackpad, an SD card reader, USB port and comes with its own 22Wh battery. The dock's battery not only powers itself but it can charge the Prime's battery, almost doubling battery life.

We'll spend the next several pages going through every detail of the new Eee Pad Transformer Prime as well as NVIDIA's Tegra 3 SoC, but on the surface, ASUS has built a formidable tablet. How does it fare under closer scrutiny? Very well it turns out...

A Lesson in How Not to Launch a Product

Of all of the things ASUS has learned from running the PC side of its business it seems that the proper way to launch a brand new platform didn't translate over to its tablet business. I received the Eee Pad Transformer Prime 39 hours ago and the NDA lifted just now. While this is not atypical for many mobile launches, ASUS should know better.

To do a thorough review of any product the minimum time we need to adequately integrate that product into our daily routine and come away with a deep understanding of the product is at least a week. I say that's the minimum amount of time because if you give us more, then we can do even better analysis and spend even more time bug hunting. Most of the players in the mobile space don't really get this, and as a result they are complicit in the disappointing amount of analysis that's done on their hardware. This will change as time goes on, but I honestly expected more from ASUS.

My WiFi is Broken

What's one of the biggest risks when you give reviewers only 39 hours to review a product? If something is wrong with the review sample, there's hardly any time to fix it. This time I drew the short straw and my Transformer Prime review sample arrived with highly questionable WiFi performance. Both range and performance were impacted by whatever plagued my sample. I got less range and much lower performance than the original Eee Pad Transformer regardless of location or wireless access point. How bad? My Prime had difficulty sustaining more than 2Mbps over WiFi. ASUS and NVIDIA both sent me proof that there wasn't something wrong with other samples, and from their data it looks like the WiFi stack in the Prime is at least comparable to the original Transformer. The problem may just be limited to my unit, although I tend to believe that if something goes wrong once, it's bound to go wrong more than once.

Based on the fact that wireless performance improves when docked and upstream speeds are almost normal, if I had to guess I'd say that the receive antenna is either not fully connected or somehow impaired from doing its normal duty. I should have a replacement unit in by tomorrow, but unfortunately that means you won't see any WiFi dependent results here.

ASUS chose Broadcom's BCM4329 for WiFi/Bluetooth duty. Although the controller supports both 2.4GHz and 5GHz operation, the Prime is limited to work on 2.4GHz networks. The rest of the design is pretty standard - you get a single spatial stream at a maximum of 72Mbps. Real world performance, if ASUS/NVIDIA's numbers are to be believed, should top out somewhere in the upper 30Mbps area.

Update: ASUS got us a fixed unit, be sure to check out our follow-up here.