In a typical high-end GPU launch we’ll see the process take place in phases over a couple of months if not longer. The new GPU will be launched in the form of one or two single-GPU cards, with additional cards coming to market in the following months and culminating in the launch of a dual-GPU behemoth. This is the typical process as it allows manufacturers and board partners time to increase production, stockpile chips, and work on custom designs.

But this year things aren’t so typical. GK104 wasn’t the typical high-end GPU from NVIDIA, and neither it seems is there anything typical about its launch.

Like its predecessors, GTX 670 will fill in the obligatory role as a cheaper, slower, and less power-hungry version of NVIDIA’s leading video card. This is a process that allows NVIDIA to not only put otherwise underperforming GPUs to use, but to satisfy buyers at lower price points at the same time. Throughout this entire process the trick to successfully launching any second-tier card is to try to balance performance, prices, and yields, and as we’ll see NVIDIA has managed to turn all of the knobs just right to launch a very strong product.

Like GeForce GTX 680, GeForce GTX 670 is based on NVIDIA’s GK104 GPU. So we’re looking at the same Kepler design and the same Kepler features, just at a lower level of performance. As always the difference is that since this is a second-tier card, NVIDIA is achieving that by harvesting otherwise defective GPUs.

In a very unusual move for NVIDIA, for GTX 670 they’re disabling one of the eight SMXes on GK104 and lowering the core clock a bit, and that’s it. GTX 670 will ship with 7 active SMXes, all 32 of GK104’s ROPs, and all 4 GDDR5 memory controllers. Typically we’d see NVIDIA hit every aspect of the GPU at once in order to create a larger performance gap and to maximize the number of GPUs they can harvest – such as with the GTX 570 and its 15 SMs & 40 ROPs – but not in this case. 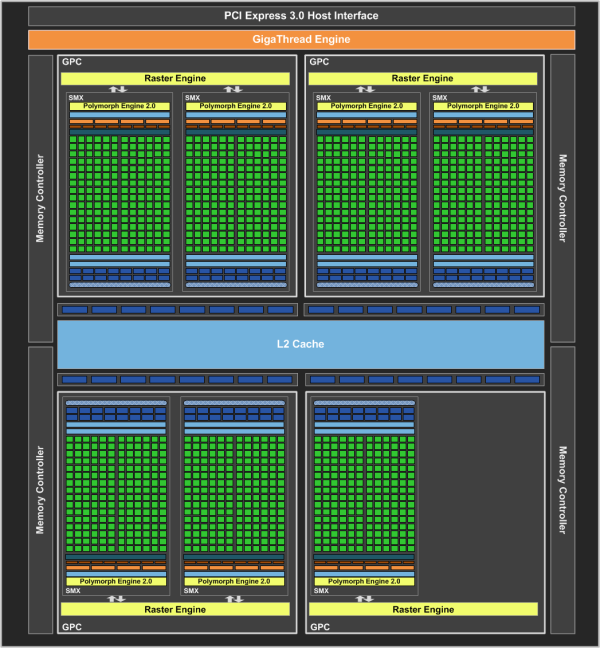 Meanwhile clockspeeds turn out to be equally interesting. Officially, both the base clock and the boost clock are a fair bit lower than GTX 680. GTX 670 will ship at 915MHz for the base clock and 980MHz for the boost clock, which is 91MHz (9%) and 78MHz (7%) lower than the GTX 680 respectively. However as we’ve seen with GTX 680 GK104 will spend most of its time boosting and not necessarily just at the official boost clock. Taken altogether, depending on the game and the specific GPU GTX 670 has the capability to boost within 40MHz or so of GTX 680, or about 3.5% of the clockspeed of its more powerful sibling.

As for the memory subsystem, like the ROPs they have not been touched at all. GTX 670 will ship at the same 6.008GHz memory clockspeed of GTX 680 with the same 256-bit memory bus, giving it the same 192GB/sec of memory bandwidth. This is particularly interesting as NVIDIA has always turned down their memory clocks in the past, and typically taken out a memory controller/ROP combination in the past. Given that GK104 is an xx4 GPU rather than a full successor to GF110 and its 48 ROPs, it would seem that NVIDIA is concerned about their ROP and memory performance and will not sacrifice performance there for GTX 670. 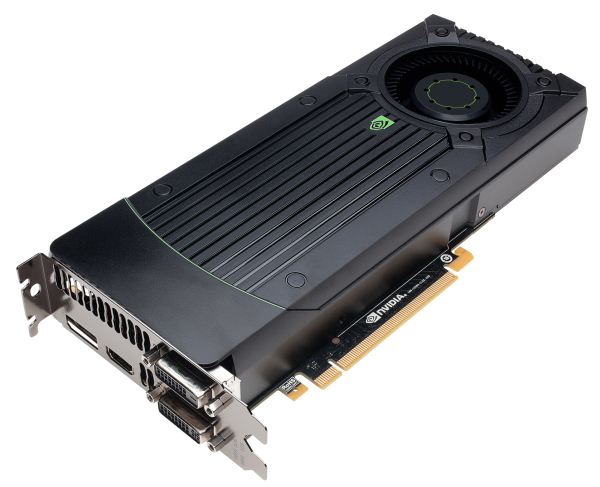 Moving on, unlike the GTX 680 launch NVIDIA is letting their partners customize right off the bat. GTX 670 will launch with a mix of reference, semi-custom, and fully custom designs with a range of coolers, clockspeeds, and prices. There are a number of cards to cover over the coming weeks, but today we’ll be looking at EVGA’s GeForce GTX 670 Superclocked alongside our reference GTX 670.

As we’ve typically seen in the past, custom cards tend to appear when GPU manufacturers and their board partners feel more comfortable about GPU availability and this launch is no different. The GTX 670 launch is being helped by the fact that NVIDIA has had an additional 7 weeks to collect suitable GPUs compared to the GTX 680 launch, on top of the fact that these are harvested GPUs. With that said NVIDIA is still in the same situation they were in last week with the launch of the GTX 690: they already can’t keep GK104 in stock.

Due to binning GTX 670 isn’t drawn from GTX 680 inventory, so it’s not a matter of these parts coming out of the same pool, but realistically we don’t expect NVIDIA to be able to keep GTX 670 in stock any better than they can GTX 680. The best case scenario is that GTX 680 supplies improve as some demand shifts down to the GTX 670. In other words Auto-Notify is going to continue to be the best way to get a GTX 600 series card.

Finally, let’s talk pricing. If you were expecting GTX 570 pricing for GTX 670 you’re going to come away disappointed. Because NVIDIA is designing GTX 670 to perform closer to GTX 680 than with past video cards they’re also setting the prices higher. GTX 670 will have an MSRP of $399 ($50 higher than GTX 570 at launch), with custom cards going for higher yet. This should dampen demand some, but we don’t expect it will be enough.

Given its $399 MSRP, the GTX 670 will primarily be competing with the $399 Radeon HD 7950. However from a performance perspective the $479 7970 will also be close competition depending on the game at hand. AMD’s Three For Free promo has finally gone live, so they’re countering NVIDIA in part based on the inclusion of Deus Ex, Nexuiz, and DiRT Showdown with most 7900 series cards.

Below that we have AMD’s Radeon HD 7870 at $350, while the GTX 570 will be NVIDIA’s next card down at around $299. The fact that NVIDIA is even bothering to mention the GTX 570 is an interesting move, since it means they expect it to remain as part of their product stack for some time yet.

Update 5/11: NVIDIA said GTX 670 supply would be better than GTX 680 and it looks like they were right. As of this writing Newegg still has 5 of 7 models still in stock, which is far better than the GTX 680 and GTX 690 launches. We're glad to see that NVIDIA is finally able to keep a GTX 600 series card in stock, particularly a higher volume part like GTX 670.