Mechanical keyboards have become increasingly sought after over the past year, with more and more manufacturers jumping on the bandwagon, oftentimes producing gamer-oriented hardware that features mechanical Cherry MX switches. Going mechanical has a lot to offer both the seasoned typist and the serious (or even semi-serious gamer), and we've gone over those benefits in our reviews of Rosewill's RK-9000 keyboard (with Cherry MX Blue switches) and Corsair's Vengeance K60 and K90 keyboards (with Cherry MX Red switches).

For a little while we've also had on hand a trio of Thermaltake's Meka keyboards (along with their Black Element mouse), and all of these keyboards feature Cherry MX Black switches. So we have a few questions to answer here: what's with all these colored switches, what has Thermaltake made out of them, and which one is going to be the best for you? And as a substantial sidenote, in a world dominated by Razer and Logitech mice, what is Thermaltake bringing to the table with the Black Element?

With the Thermaltake Meka we have not one but three keyboards on hand, which sounds more onerous than it is. All three of these keyboards feature the same build materials and the same Cherry MX Black switches; they differ only in size, layout, and additional features. In order from smallest to largest, we have the Meka, the Meka G1, and the Meka G-Unit. 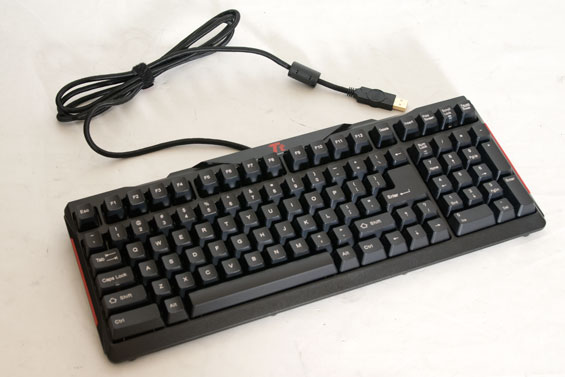 The smallest of the three, the Meka (no suffix) has the most condensed/compressed layout. The document navigation key cluster is gone, with the Insert and Delete keys moved to above the number pad while the Page Up, Page Down, Home, and End keys relegated to the number pad. More perplexing is the reverse-L-shaped Enter key, which forces the "\" ("|") key to share space with the Backspace key. And probably the most unforgiving change is moving the "? /" key from the left of the Right Shift key to the right of the Up Arrow. Mechanical switches or no, the Meka's bizarre layout makes it a poor choice for many typists, particularly those who routinely switch between keyboards. If Thermaltake wanted to save space they would've been better off looking at notebook keyboard layouts featuring keypads rather than putting together this chimera. On the good side of things, note that the Meka also features two USB 2.0 ports at the top, which is always a welcome touch.

The next keyboard, and my personal favorite, is the Meka G1. The G1 features the most standardized key layout of the three; the only hiccup is replacing the Windows key with an Fn key and then moving the Windows key over to the right of the spacebar. I'm not personally a fan of that change, but gamers who've had to get used to avoiding the Windows key will probably be happy to see the move. The G1's massive cable bundle includes two USB 2.0 connectors (one for the keyboard, and one for the two USB 2.0 ports at the top of the keyboard) along with passthrough cables for the headphone and mic jacks on your tower that connect to the jacks on the top of the keyboard (next to the USB 2.0 ports). Users who prefer PS/2 connectivity also have that option, and Thermaltake includes a removable plastic wrist rest. The one thing I don't like is that the lock LEDs are all very bright red; I actually found the Num Lock to be slightly distracting.

Finally there's the Meka G-Unit, the largest of the three. My only complaint with this one is the reverse-L-shaped Enter key, but the dedicated media keys, volume controls, macro keys, and control of the backlight are all appreciated. That white LED backlight is tough to capture in photos, but you can see that it's selective: Thermaltake only backlights the keys they expect gamers to use. That means the WASD cluster, the arrow keys (also on the number pad), the spacebar, the Left Shift, and the Left Control keys. The backlighting can also be disabled if you're so inclined.

One major point where the Meka G-Unit does differ from the Meka G1 is that it uses a single USB 2.0 cable as opposed to a bundle, and that cable powers the two USB 2.0 ports in the top of the keyboard. Not just that, but the G-Unit also features a built-in audio chip to handle the microphone and headphone jacks in the top of the keyboard. Installing the drivers will have Windows default to using the G-Unit's audio jacks, unfortunately, but it's easy enough to switch back to your normal speakers.

Of course, that's the other major point where the G-Unit differs from the others: it actually has driver software due to having macro keys. We'll take a brief look at the software on the next page.