We don’t have any major qualifications to go over before we hit the GTX 680M benchmarks, but we did end up running our gaming suite multiple times. The initial shipping driver was a 295 Series NVIDIA build, which is now getting somewhat old. We tested our core gaming suite with those drivers before updating to the 306.23 drivers, and then more recently the 306.97 drivers (there was almost no change in performance between the .23 and .96 drivers, if you’re wondering). Unlike AMD’s Hotfix driver, NVIDIA’s 306.xx driver update is more of a mixed bag—a few games improve in performance, but several titles in our test suite actually drop a bit. Of course, the GTX 680M already had a commanding lead, so losing a few FPS isn’t likely to hurt too much. Here’s the list of notebooks we’ve lined up for the graphs this time (and note that all of the laptop names link to the specific reviews):

This is a grudge match between AMD and NVIDIA, and now that we’re sporting the same hardware the only thing separating us from the mobile gaming performance crown is a few pages of benchmarks. We’re going to skip straight to the stuff that presumably everyone is here to see: gaming performance. If you want to see how the P170EM GTX 680M stacks up against the HD 7970M in general applications, we reran all of our general application tests and basically came up with a tie, so we’re going to skip those this time around (though they’re available in Mobile Bench). 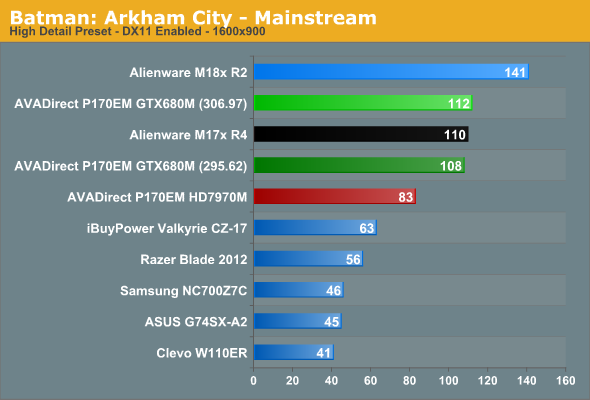 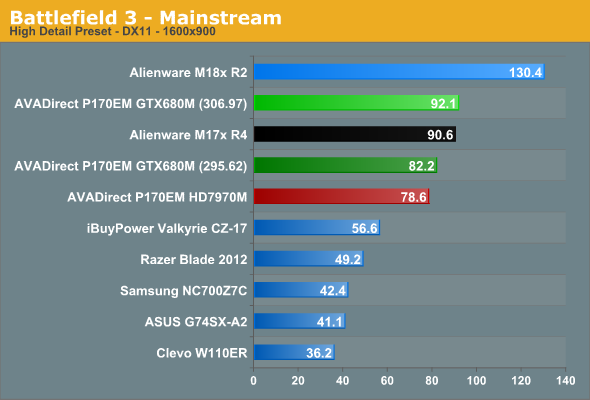 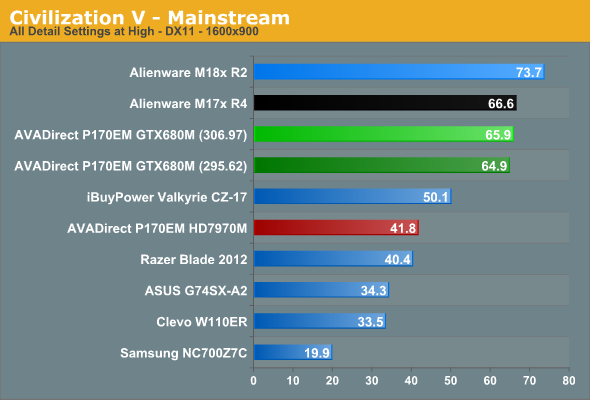 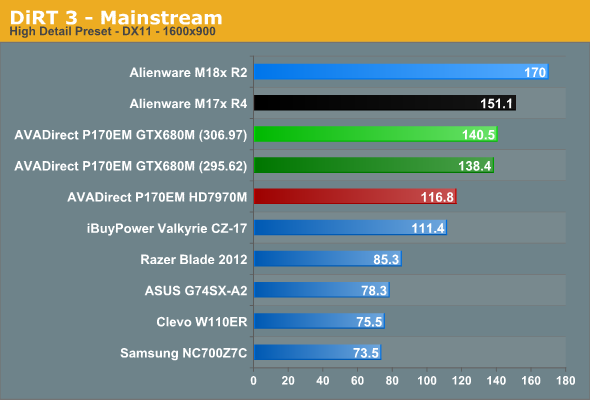 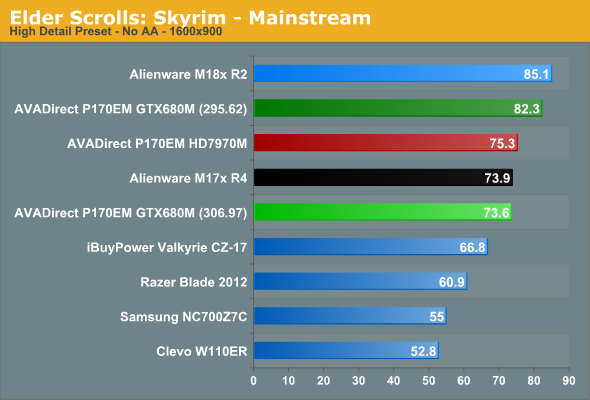 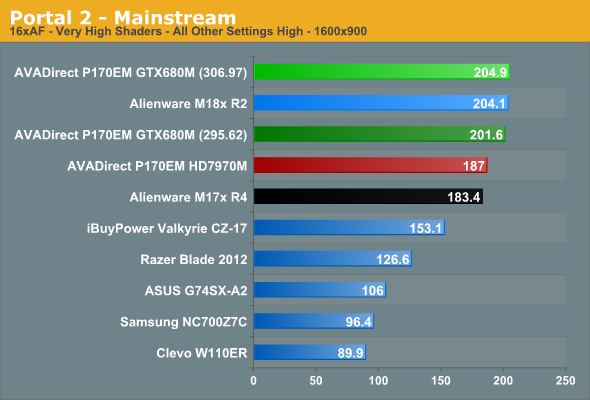 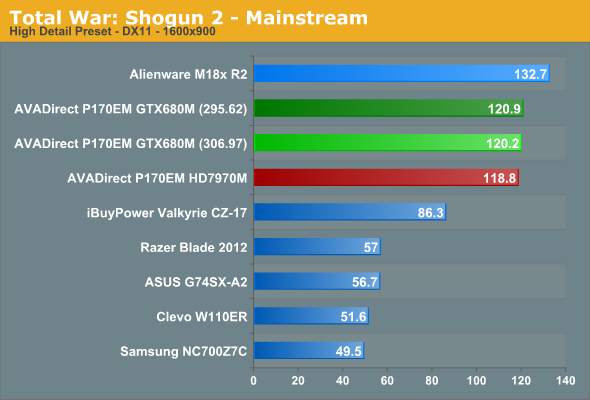 Right out of the gates, NVIDIA’s GTX 680M takes a commanding lead in our Mainstream testing (1600x900 with ~High details). The margin of victory is as much as 58% (Civilization V), though we do have a couple of games that are basically tied (Skyrim goes to the HD 7970M by a couple percent while Shogun 2 favors GTX 680M by just over 1%). With our less demanding settings, NVIDIA leads by an average of 15%—right about what you would want from an 11-15% increase in overall notebook cost. But then, it’s unlikely anyone would plunk down roughly two grand (give or take) just to run at moderately high settings and 1600x900; let’s see what happens when we turn the settings dial to 11. 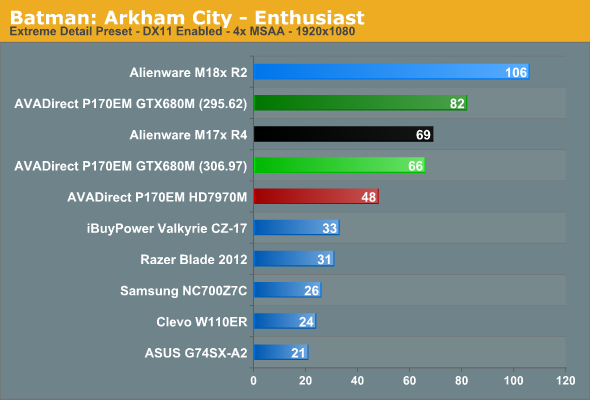 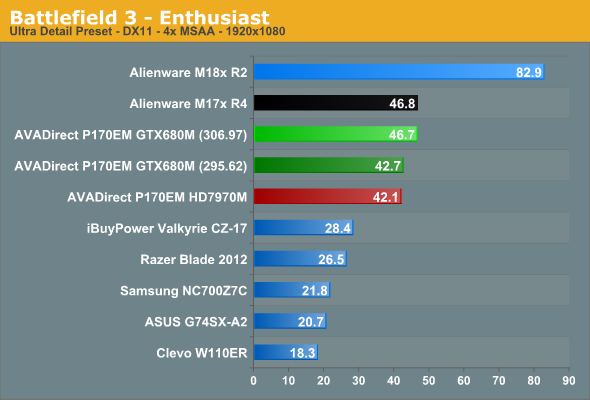 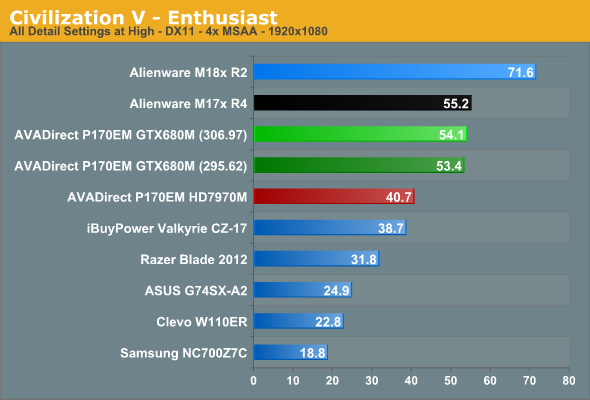 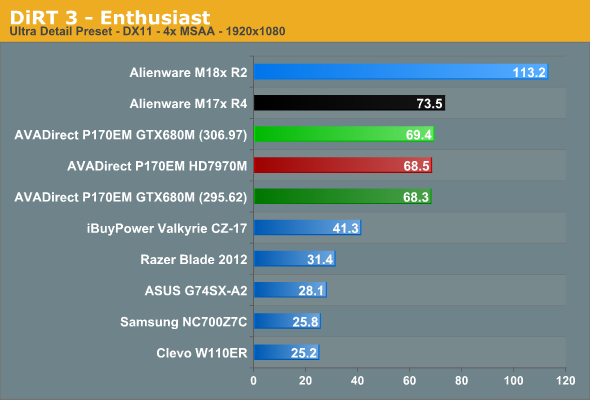 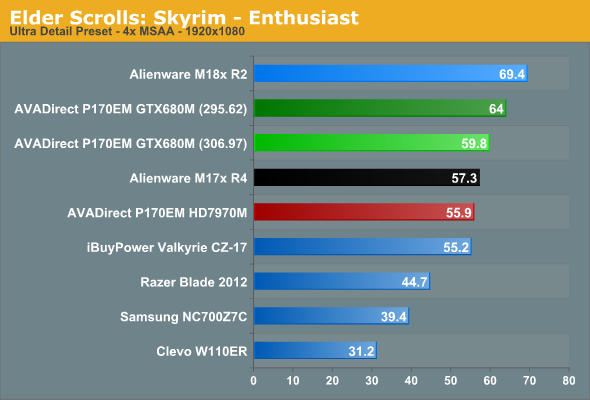 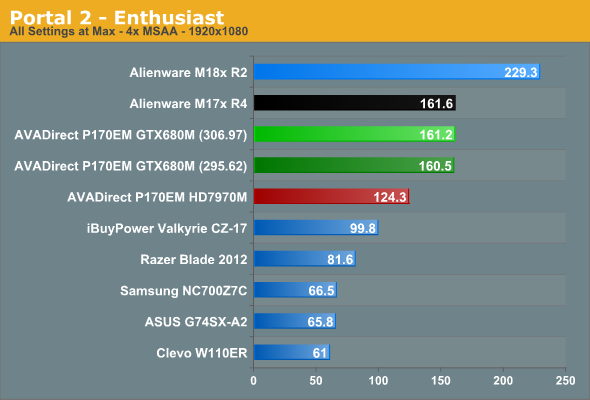 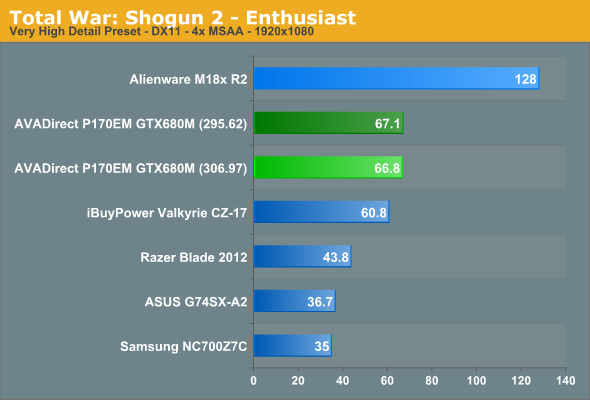 The gap at our Mainstream settings was moderately close, but at Enthusiast detail we end up with several serious blowouts, and unfortunately there’s not a single bright spot for AMD. Batman is a 38% lead for NVIDIA, Civilization V is 33%, and Portal 2 is 30%; those are balanced by a tie in DiRT 3, a scant 7% lead in Skyrim, and an 11% lead in Battlefield 3. Incidentally, Alienware’s M17x R4 shows generally similar performance, with some variations likely caused by differences in the drivers and other components.

As for Shogun 2, unfortunately there’s a driver bug of sorts that prevents us from even testing out the “Very High” preset with AMD’s 7970M—basically, the game looks at the capabilities of the Intel HD 4000 iGPU, which doesn’t allow a few key selections, even though the game is actually supposed to be looking at the HD 7970M. We did run 1080p with identical “nearly max” settings on both GPUs, however, and at least at those settings we wind up with a blowout for NVIDIA: 46.2 FPS compared to 31.3 FPS.

NVIDIA basically takes a clean sweep of our regular gaming benchmarks, but we’re not done with the gaming discussion just yet. We decided to look at some other more recent releases to try to better characterize gaming performance.