Truly Ergonomic Computer Keyboard Review: One Month with the TECK

Back in late January, I received the TECK for review, a keyboard that goes by the not-so-humble name of “Truly Ergonomic Computer Keyboard”, manufactured by a company that likewise uses the name Truly Ergonomic (hello name space collision). I’m sure other companies that make ergonomic keyboards might take exception to the name, but as far as I’m concerned that’s mostly marketing. The real question is how the TECK fares in day-to-day use, and whether it’s really a better keyboard for serious typists—and particularly typists like me that suffer from carpal tunnel syndrome (CTS)—compared to the other options. 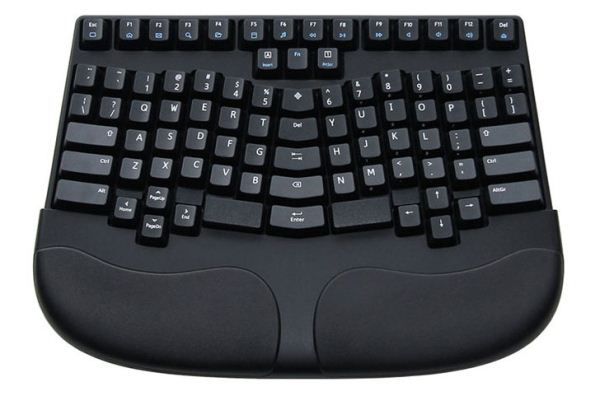 I won’t sugarcoat the difficulty of the initial learning curve: it’s brutal, and I already wrote some first impressions on the subject. If you buy a keyboard like this, you’re going to need to plan on a solid three or four days minimum before you can start to approach your previous efficiency. Give it another week or two, though, and as with most things it becomes mostly second nature. With over a month of regular use now in my back pocket, I’m ready to provide some thoughts on the TECK experience. Can any keyboard possibly be worth a price of entry well north of $200? I suppose that depends on what you’re doing with it.

My Background—Why the TECK Matters

Let me start with a bit of background information so that you know where I’m coming from and why I would even be interested in using the TECK. Currently, I’m the Senior Editor of the laptops/notebooks section at AnandTech, but I also provide proofing/editing on various other articles, and I dabble in the occasional other section. I’ve now been with AnandTech for 8.5 years, and during that time I’ve gone from 30 years old to a ripening 39 year old. I have a habit of being perhaps more verbose than necessary in my reviews (my current record goes to the ~25K word socket 939 SFF roundup back in late 2005—and it’s the reason I try to avoid roundups these days). Succinctly put, I type quite a bit on a keyboard and as I got older I started having issues with carpal tunnel syndrome (CTS).

I’ve tried a few other approaches during the years to help mitigate the irritation of CTS, including doing a lot of dictation using Dragon NaturallySpeaking for a few years. I actually like Dragon, but when I got married and then had one young child and later a second enter into the equation (I now have a 10 year old, nearly 3 year old, and our baby just turned 1 this past weekend), I found that getting the necessary privacy to do proper dictation can be rather difficult. So as much as I like the idea of speech recognition, it’s probably not going to be viable for me until either my children get old enough that they can learn to leave dad alone while he’s working, or I get an office with a soundproof door I can lock myself behind.

My secondary approach to alleviating my CTS has been threefold. First, try to type less; I basically quit commenting on most hardware enthusiast forums because it was creating extra wear and tear on the aging carpals. Second, try to exercise more, eat healthier, and take breaks from the computer every hour or so—I’m not doing so well on that last part, though I’m definitely in better shape and eating healthier than when I was in my early 30s and 20s! Finally, I switched to a split keyboard back in 2004, a Microsoft Natural that I still have today—it’s so old that it doesn’t even have a USB connection if that helps. All of the above help to varying degrees, but until I fully quit typing I suspect I’m going to have to continue the search for ways to avoid causing my carpals undue stress.

When Dustin started reviewing mechanical keyboards last year, I started taking a minor interest. I have plenty of other keyboards around the house, not to mention a bunch of laptops as well, but they’re all “cheap” membrane-based keyboards. I was curious to see if anyone offered a good mechanical switch keyboard with an ergonomic design—basically something like my MS Natural but with Cherry MX switches. There was only one option at the time, from Kinesis, and it wasn’t quite what I was looking for plus it was priced way higher than I wanted to spend. Then early this year a press release crossed my email inbox (forwarded from Dustin) about a new ergonomic keyboard with mechanical switches, the TECK. I was intrigued and sent an email asking for a review sample, and that brings us to today’s review.

Now you know something more about my background and interest in the TECK. For the record, I now have a Kinesis Advantage for review as well, which will replace the TECK once I finish with this review. Then I’ll use it for a few weeks and will provide some thoughts on how they compare. But for now, let’s move on to the TECK itself and look at the design along with a subjective evaluation.