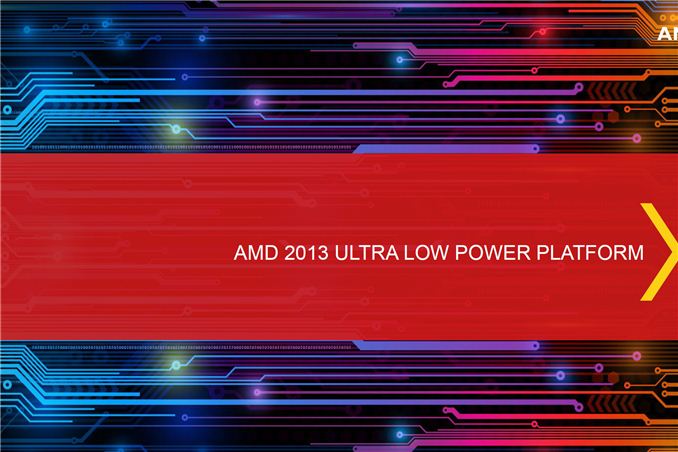 AMD has a bunch of APUs launching today, and while the only hardware we have on hand for testing right now consists of a Kabini laptop, we wanted to at least briefly discuss the two other APUs. Temash is essentially the same APU as Kabini, only with a lower TDP target, which also means reduced clock speeds. Where Kabini is destined for ultraportable laptops and hybrid devices, or perhaps a larger tablet, Temash is very much targeted at “true” tablets. The Temash family currently consists of three APUs with three different TDPs: 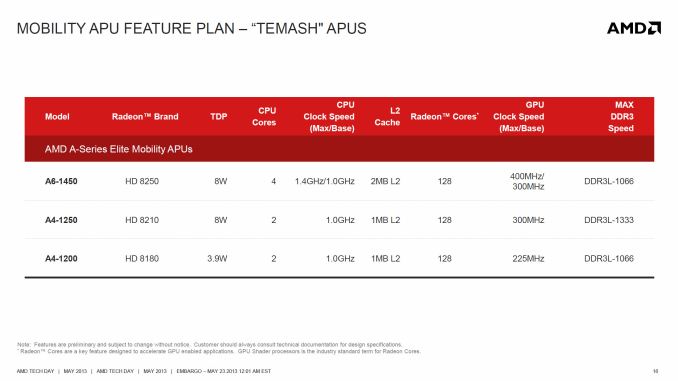 At the top of the product stack is the A6-1450, a true quad-core APU with a 1.4GHz maximum Turbo Core clock and a base 1.0GHz clock. It has an 8W TDP, and like all of the currently announced Kabini/Temash parts it features a GCN-based GPU with 128 Radeon cores. Clock speeds on both the CPU and GPU are lower than the A4-5000M Kabini we looked at today, but in the world of tablets the A6-1450 should prove quite formidable. What’s interesting (or perhaps “odd” is a better word) is that the A6-1450 may have a lower TDP than the next APU, the A4-1250.

The A4-1250 drops to a dual-core CPU and skips out on Turbo Core. With those two changes, one would expect it to consume less power than the A6 model, but it ends up at the same 8W. (Note: I have another slide from AMD that shows 9W; this might simply be a typo, but the above slide shows 8W.) That could mean the A4-1250 is either die-harvested or, more likely, it’s from a part of the wafer that wasn’t able to reach the TDP/clock speed requirements to be in a lower power part. I’d guess that the A4-1250 shouldn't have to throttle much, but we'll see.

The final chip is the same configuration as the A4-1250, but the A4-1200 has a reduced GPU clock and it has a 3.9W TDP. This is the chip that will go up against the current fastest ARM SoCs like Apple’s A6 in the 4th generation iPad 4 and Qualcomm’s Krait. Based on what we’ve seen from Kabini, at 225MHz the A4-1200 should be roughly comparable to the A6 GPU, though Apple has of course been shipping for a while now whereas we’ve yet to see a Temash tablet.

AMD provided the usual collection of marketing material, which we’ve included in the gallery below.