There’s certainly some issues when competitors outright copy another’s design, but luckily for Dell they have one of the most appealing laptops already in the XPS 13. The XPS 15, other than the larger size, is extremely similar to its source of inspiration, and that’s a good thing. Moving to the Infinity Edge display brings the same strengths and weaknesses along with it, but the one thing you’d have a hard time knocking is the look of this laptop. 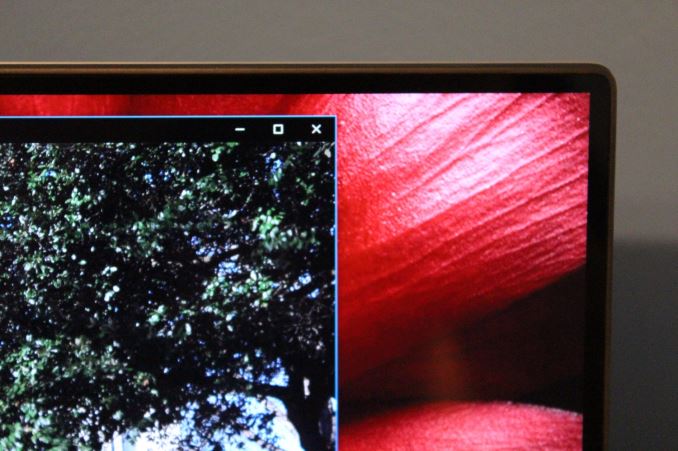 Dell uses CNC aluminum on the top and bottom of the laptop, which gives it that great cool feeling of metal when you are holding it in your hand. But open up the XPS 15, and you get to look at a soft touch carbon fibre weave which surrounds the keyboard deck. This soft touch material makes for a positive typing experience, and by going to black on the keyboard, Dell gets to avoid the contrast issues that happen on other machines with lighter colored keys. Although the laptop looks like a bit of a sandwich when its closed, I think the color scheme works very well and gives the XPS lineup a premium look. 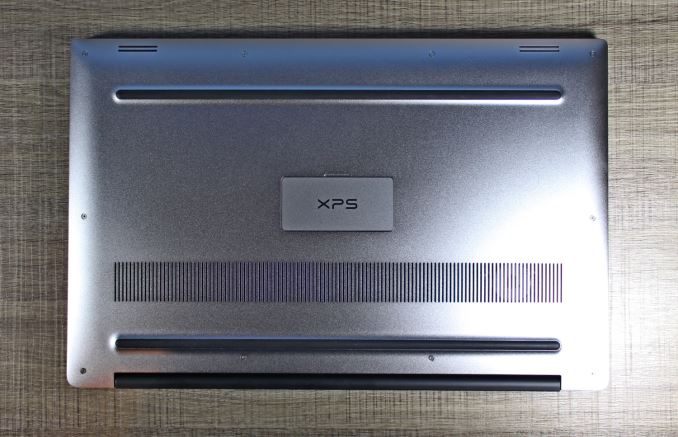 The bottom of the laptop is as well thought out as the XPS 13. There’s a large vent for cooling, and the rubber feet are almost the entire width of the machine. There’s no issue with sliding around on a table top when you are using the XPS 15 thanks to these feet, and that’s not always something I can say about other laptops. It also gives you a nice stable platform in your lap. Another great XPS touch is that all of the FCC information, serial numbers, and other markings, are collectively put under an XPS badge on the bottom of the device to keep the look as clean as possible.

The left side of the laptop has the power connector, USB 3.0 Type-A port, HDMI, a USB 3.1 Gen 2 Type-C port which supports Thunderbolt 3 and power as well, and a headset jack. The right side has another USB 3.0 port, SD card slot, and a push button battery gauge. With the inclusion of USB 3.1 Gen 2 and Thunderbolt support there is a pretty big amount of bandwidth for any accessory, but as that market matures the USB Type-A connectors are likely going to see more use. It would have been nice to see a third USB port on the side but that’s a minor issue. Dell does sell a USB-C adapter which gives HDMI, VGA, Ethernet, and USB 3.0 all in one nice compact package which works well.

Once opened, the Infinity Edge display captures your eye, and the minimal bezel looks as good, or even better, than the smaller XPS 13. The webcam is still in a poor location though, tucked under the display and pointing up, which doesn’t flatter anyone. Considering the large bezel at the bottom of the display, I’d be fine with the screen shifting down slightly so the webcam could be fit above the screen, but I’m not a big user of a webcam so it’s not a big issue for me. If you do utilize a webcam a lot, this is not ideal and an external one might be better. I’d also like to see Windows Hello support in a premium machine such as this. Microsoft was able to fit it into the Surface Pro 4 and Surface Book with minimal bezels, so it can be done. 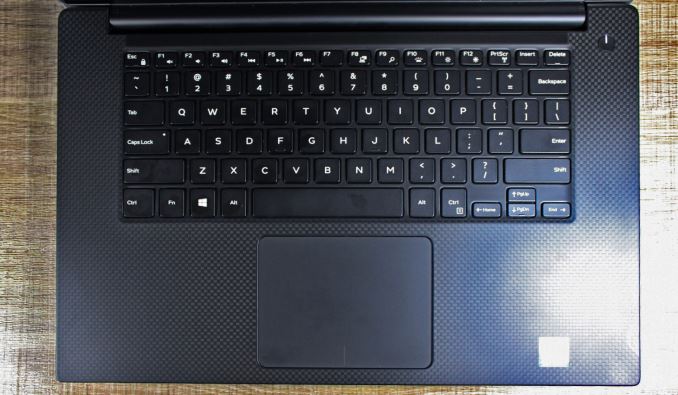 Taking a look at the keyboard, it’s very possible this is the exact same keyboard as on the XPS 13. It has the same white backlighting with high, low, and off settings, and the same layout as well. Dell didn’t try to squeeze a number pad into this 15.6-inch machine, and that’s a good thing since it would be very compromised with the smaller chassis this fits into. Key travel is 1.3 mm, which is adequate, and on the XPS 13 it was likely all that could be done thanks to the very thin body, but on the thicker XPS 15 I would have liked some more depth. The actuation force is also pretty light. The keyboard is ok but it’s not the best I’ve used, especially on a larger device.

Dell has gone with a Synaptics trackpad, and it is both very large and very smooth. Dell uses the Microsoft Precision Touchpad standard for their software, and although it lacks the outright customization of some of the other packages, in my time with the XPS 15 I found the touchpad to be excellent. The large size is very welcome, and it’s very precise while at the same time being very smooth. Two-finger scrolling works very well. There are not many options for three and four finger gestures with the Precision Touchpad, with three-finger tap opening Cortana, and four-finger tap opening Action Center. There are no other choices other than to swap those or disable it.

The overall design of the XPS 15 is as ground-breaking as the XPS 13 before it. By shrinking the bezels, Dell is able to fit a 15.6-inch device into a much smaller chassis, which makes it much more portable. The laptop itself is only 17 mm (0.66”) thick at its widest point (not including the feet) and weight with the 56 Wh battery is 1.78 kg (3.9 lbs) which is very light for a 15.6-inch machine. If you step up to the 84 Wh battery, that bumps the weight to 2 kg (4.4 lbs) which is still pretty respectable.