When Intel released the enterprise focused Broadwell-EP Xeon CPUs, there were a few features added to the platform over the previous Haswell-EP generation. One of these has come through to the consumer parts, though in a slightly different form.

For Broadwell-EP, one of the new features was the ability to have each core adjust the frequency independently depending on AVX or non-AVX workloads. Previously when an AVX load was detected, all the cores would reduce in frequency, but beginning with BDW-EP now they act separately. Intel has taken this enterprise feature and expanded it a little into a feature they're calling ‘Turbo Boost Max 3.0’.

TBM3, in a nutshell, will boost the frequency of a single CPU core when a single-threaded program is being used.

It requires a driver, similar to Skylake’s Speed Shift feature (which is not in Broadwell-E), which should be distributed in new X99 motherboard driver packages, but will also be rolled out in Windows 10 in due course. It also comes with a user interface, which might make it easier to explain: 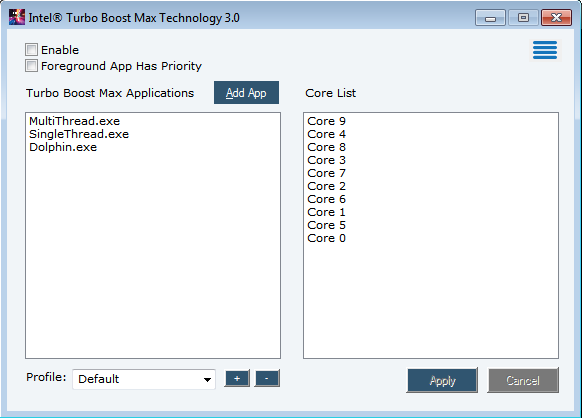 Each of the cores in the processor can be individually accessed by the OS with the new driver, and the cores will be rated based on their performance and efficiency as they come out of Intel. In the image above, Core 9 is rated the best, with Core 0 at the bottom. This means that for TBM3, the driver will primarily use Core 9.

When pinned, the software will boost the frequency of that core only. The only question now is how much is the boost, and what is the effect on performance?  Unfortunately, both of those questions have bad answers.

Intel refuses to state the effect of TBM3, saying that ‘each CPU is different and could boost by different amounts’. Now, you might think that makes sense. However…

On the MSI motherboard we used for most of our testing, Turbo Boost Max 3.0 was disabled by default in the BIOS. We asked about this, and they said it was a conscious decision made by management a couple of weeks prior. This makes TBM3 useless for most users who never even touch the BIOS. That sounds good, right?

Well, the BIOS also sets how much the CPU can boost by. So ultimately it doesn’t matter how much the CPU might like to boost in frequency, the system will only boost by the amount it says so in the BIOS, which is set by the motherboard manufacturer. In the case of the MSI BIOS, it was set to ‘Auto’. In my case, ‘Auto’ meant a boost of zero, despite the MSI BIOS ‘suggesting’ 4000 MHz. I had to manually set Core 9 to a 40x multiplier. Then it worked.

All in all, TBM3 was only enabled after I changed two settings and specifically setting the correct core in the BIOS. For me, this isn’t a global feature if that is the case. That’s not to mention how Multi-Core Turbo also comes into the mix, which still works with Turbo Boost 2.0 speeds by default. Based on what we've seen, it would seem at this time that TBM3 isn’t being readily embraced at this time.

It should be noted that we also had one of the new ASUS motherboards in for testing, however time was too limited before leaving for Computex to verify if this is the case on the ASUS motherboard as well. ASUS has told me that they have/will have a software package that enables TBM3 to be applied to multiple cores at once, whereas the Intel software will only accelerate a single program. It should be interesting to test.

In the options menu for TBM3, there are two primary options to take note of. The first is the utilization threshold, which is the % at which the software will take control of the single threaded application and pin it to a core. By default, this is set at 90%.

The other option is where a dilemma will be faced. It is the evaluation interval, or the period of time between checks that the software makes in order to accelerate a program. The version of the software we had started with a value of 10 seconds. That means if the software package starts one second or nine seconds into a benchmark run, it can affect the score. The answer here would be to make the evaluation interval very small, but the software only has a one-second resolution. So for benchmarks that run for only a few seconds (anyone benchmarking wPrime or SuperPi, for example), might either fail to be accelerated if the evaluation window is set at default, or only slightly when set at one second.

As you can imagine, if a reviewer does not know if TBM3 is enabled or not, there may be some odd benchmark results that seem different to what you might expect. It should be noted that because of the BIOS issue and the potential for motherboard manufacturers to do something different with every product, we ran our benchmarks with TBM3 disabled, and readers should check to see if reviewers specify how TBM3 is being used when data is published.

When the Skylake mainstream platform was launched, it was noted that the processor packages and substrates were thinner compared to the previous generation. It would appear that Intel is using the same packaging technology for Broadwell-E as well.

On the left is the Haswell-E based Core i7-5960X, and on the right is the Broadwell-E based Core i7-6950X. Both of these platforms use a FIVR, the Fully Integrated Voltage Regulator, which Intel equipped on this microarchitecture in order to increase power efficiency. Usually the presence of the FIVR would require additional layers for power management in the package, but it would seem that Intel has been optimizing this to a certain extent. Each individual layer is certainly thinner, but it is likely that Intel has also reduced the number of layers, though my eyes cannot discern the resolution needed to see exactly how many are in each CPU (and I don’t have a microscope on hand to test).

A couple of questions will crop up from readers regarding the thinner package. Firstly, on the potential for bending the package, especially in regards to a minor story on Skylake where a couple of CPUs were found to have bent when under extreme cooler force. As far as Intel is aware, Broadwell-E should not have a problem for a number of reasons, but mostly related to the dual latch socket design and socket cooler implementation. Intel’s HEDT platforms, from Sandy Bridge-E on, have been rated as requiring 30-40% more pressure per square inch then the mainstream platforms. As a result the sockets have been designed with this in mind, ensuring the pressure of the latch and cooler stays on the heatspreader.

The other question that would come to my mind is the heatspreader itself. Intel has stated that they are not doing anything new with regards to the thermal interface material here compared to previous designs, and it is clear that the heatspreader itself is taller to compensate for the z-height difference in the processor PCB. 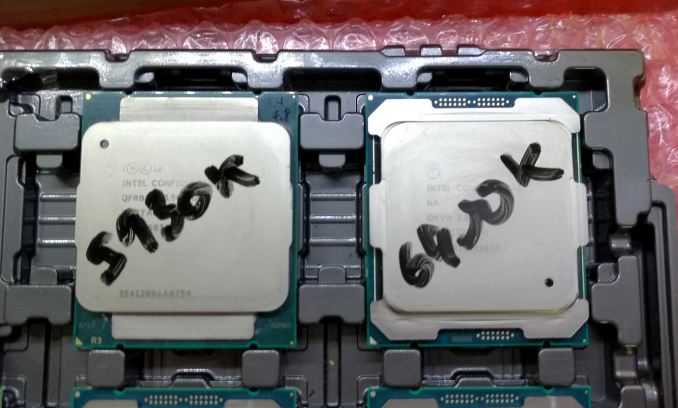 If we compare the ‘wing’ arrangement between the Haswell-E and Broadwell-E processors, Intel has made the layout somewhat more robust by adding more contact area between the heatspreader and the PCB, especially in the corners and sides. One would assume this is to aid the thinner PCB, although without proper stress testing tools I can’t verify that claim.