Unfortunately, we could not perform our usual quality testing on the K650WP due to the design of the keys. It truly does look like a mechanical keyboard, but that’s where the similarities end. It would be a grave mistake to compare its function or feeling to that of a mechanical keyboard. With mechanical keyboards, the keys have a specific travel pattern and they actuate generally about halfway between the top and the bottom of the travel length. The membrane dome keys of the K650WP do have a long travel length but they require maximum force at the very beginning of their travel. Once the keypress force overcomes the key’s initial resistance, the key will inevitably plunge all the way down the bottom of its travel distance, where it will actuate. Due to the high initial force, it is virtually impossible to prevent the finger from bottoming down every keystroke. 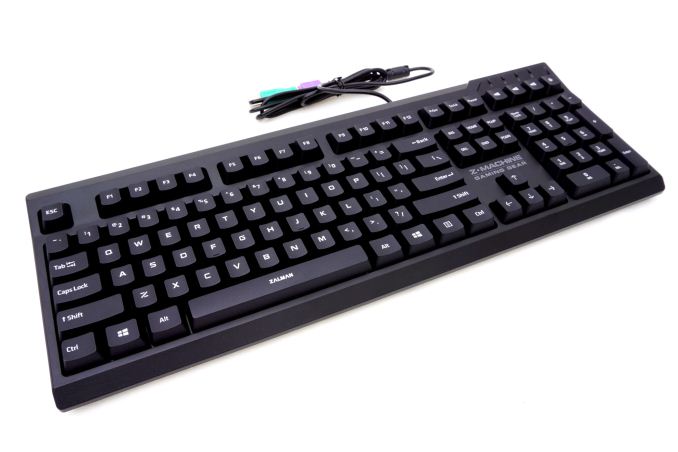 Although I always try to use every keyboard that we review as my personal keyboard for at least a week, I used the K650WP for only three days, as they were more than enough to remind me of the merits a mechanical keyboard has. My typical weekly usage includes a lot of typing (about 100-150 pages), a few hours of gaming and some casual usage, such as internet browsing and messaging. The very high actuation force followed by the immediate long travel until the key hits bottom can be very tiresome for very long typing sessions, which is why professionals prefer scissor or mechanical switches. This effect was twice as apparent with the K650WP due to the very long key travel that mimics a mechanical keyboard. For a person that is used to mechanical and chiclet switches, typing for several hours straight with the K650WP will be very uncomfortable, even painful.

The ZM-K650WP is being marketed as a gaming keyboard but it does not really offer many gaming-specific features other than the “game mode” button that locks the Windows buttons. Nevertheless, this is still better than the majority of gaming keyboards around its price range, which are normal membrane dome keyboards without anything that would separate them from a typical office keyboard other than a fancy appearance. I found that there was little to no difference between using the K650WP and a mechanical keyboard for gaming. The high initial force that the key requires is compensated by the high speed of the travel, meaning that there is very little difference to one’s actual response times. This process however can be very uncomfortable for long gaming sessions, with the backlash from the keys violently bottoming down to the flexor and extensor tendons. The height of the keyboard and the keys can be very tiring for long gaming sessions without a wrist rest as well.

As for its waterproof capabilities, the K650WP can truly survive very harsh punishment. We spilled glasses of water on our test sample while it was still plugged in and it did not even glitch or stopped working. You should be very cautious with other liquid though, as they leave back residue that will degrade or damage the keyboard. We tried spilling some Cola on the K650WP and, once the Cola started drying up, its sugar made many buttons on the K650WP sticky and unresponsive. A quick rinsing returned the K650WP to its original state. Any liquids other than water should be cleaned as soon as possible, which is not hard at all to do with a keyboard that can be rinsed with running tap water.

Zalman designed the ZM-K650WP in order to offer a durable product that mimics a mechanical keyboard to casual users who are unable or unwilling to purchase a real mechanical keyboard. Although it does mimic the appearance of a mechanical keyboard, it would be a grave mistake to compare the performance and the feeling of their keys. The extended key travel actually makes the K650WP even less comfortable than shorter membrane-based keyboards. However, it is very durable in relation to other similarly priced products and, as the company promises, it can withstand liquids, even rinsed with running water. If what you are looking for is a durable, no-frills low cost keyboard with a classic design for casual everyday use, the K650WP is a reasonable choice.