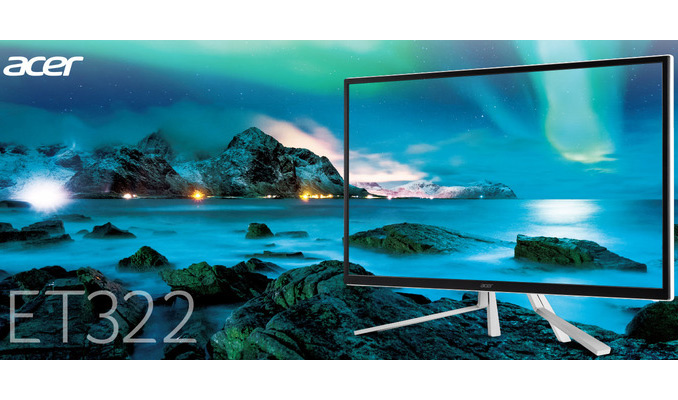 Acer has released its new display designed primarily for console gaming and HTPCs. The ET322 combines a fairly large diagonal size, a 4K resolution, and HDR10 capability with a relatively low price. The product will be available only in Japan (at least initially), but nothing prevents Acer from releasing something similar on other markets.

Acer’s ET322 QKwmiipx is based on a VA panel with 3840×2160 resolution, 300 nits brightness, 3000:1 static contrast ratio, 4 ms response time and 178° viewing angles. As a bonus feature, the monitor supports AMD's FreeSync dynamic refresh rate technology, but for some reason the manufacturer does not disclose either the maximum refresh rate of the unit or FreeSync's operational range.

The display formally supports HDR10 data, but its level of brightness is considered too low for HDR, so the actual HDR user experience is something that remains to be seen. In addition, the Acer ET322 has the so-called 6-axis color adjustment feature that promises a more realistic color reproduction by enabling users to manually regulate RGB and CMY color components as well as adjust Saturation and Hue. As for connectivity, the Acer ET322 has two HDMI 2.0 inputs with HDCP 2.2 support, so they can be plugged to PCs, consoles, STBs, UHD Blu-ray players and so on. To further simplify setups featuring the display, it has two 2 W speakers and a 3.5-mm audio jack.

The ET family of displays from Acer is a rather special lineup that is sold only in Japan. The ET-series monitors are designed primarily for those who want to replace their TVs with large displays and use them with game consoles, PCs, or media players. The ET LCDs feature stands that resemble those of TVs: they cannot swivel or pivot, their tilt adjustments are very limited (if present at all). Meanwhile, such monitors always support features like picture-in-picture and picture-by-picture because owners of large displays may want to watch content from different sources at the same time.