With the launch of the new AMD B450 budget focused chipset, we’re taking a look at two Fatal1ty gaming branded ASRock motherboards; the B450 Gaming ITX/ac and the Fatal1ty B450 Gaming K4. Both models look to offer good value for money to gamers on a strict budget but don't need features such as NVIDIA SLI multi-graphics card support.

Analyzing B450 for AMD Ryzen: A Quick Look at 25+ Motherboards

The ASRock B450 Gaming ITX/ac features a miniITX form factor and is a direct replacement to the previous B350 Gaming ITX/ac motherboard. As expected, this particular model is marketed at gamers looking to build a smaller form factor gaming system with the focus on either a single graphics card or with use with one of the Ryzen based APUs, the Ryzen 5 2400G and Ryzen 3 2200G. The gaming branding is signified via the use of a pairing of red metallic heatsinks and a pair of red colored RAM slots. 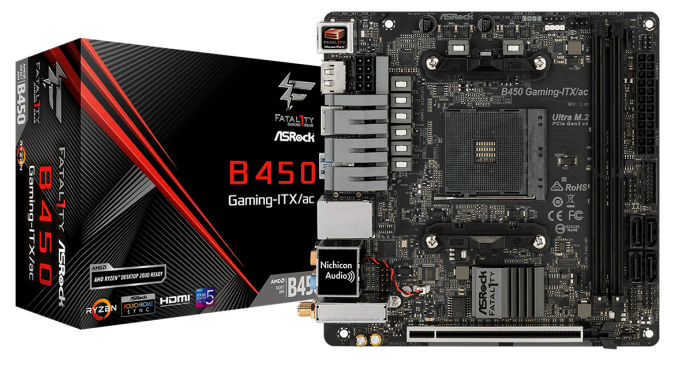 As we concluded in our ASRock X370 Gaming-ITX/ac motherboard review, the B350 variation offered better value overall when compared to the more enthusiastic X series chipset; this reigns true for users not looking to make use of X370’s extra native USB 3.1 connectivity and PCIe bandwidth, something which is rather moot on an ITX motherboard with space limitations being a factor. This time round, comparing X470 to B450, the refreshed ASRock X470 Gaming-ITX has a stronger feature set on paper with better on-board audio being a major improvement and with a price of $179.99, which dwarfs the B450 Gaming ITX/ac model which sits at a more modest $129.99.

With that being said, the B450 Gaming ITX/ac aims to offer gamers an affordable small form factor option without sacrificing too much on quality, while keeping the core ‘gaming’ features expected from a Fatal1ty branded motherboard. The inclusion of a higher quality Realtek ALC1220 audio codec and Intel I211AT Gigabit networking controller signifies premium, while keeping the price at a more modest and affordable level .

The ASRock B450 Gaming ITX/ac uses good quality controllers such as the Realtek ALC1220 audio codec and Intel I211AT Gigabit LAN networking chip with the focus being on performance but keeping to the expected Fatal1ty based gaming theme.

Even though there are limitations on connectivity due to the miniITX form factor, the B450 Gaming ITX/ac still manages to find space for a pair of USB 3.1 10 Gbps ports with both a Type-A and Type-C present. The two RAM slots have support for up to DDR4-3466+ which is one of the main benefits for opting for a second generation B450 chipset motherboard over the first generation such as B350 and X370. The ASRock B450 Gaming ITX/ac like its B350 predecessor also comes with a three-year warranty as standard.

The majority of the aesthetics on boards like this correspond to a red and black theme. Both of the included heatsinks feature a red metallic finish, while the chipset heatsink has the ASRock Fatal1ty logo printed on. The B450 Gaming ITX/ac doesn’t contain any built-in LED lighting, but present is an addressable LED header to make use of ASRock’s Polychrome certified RGB capability. 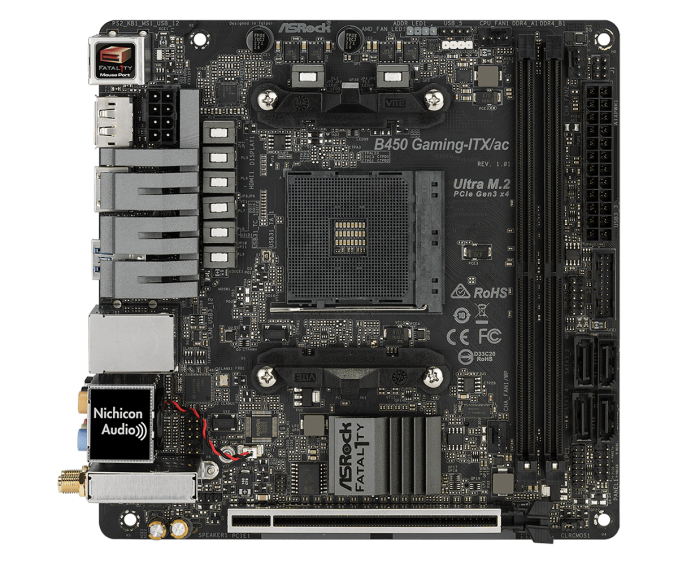 With the Mini-ITX form factor comes certain sacrifices over an ATX sized board, with the primary cuts coming through memory and PCIe capacity. The B450 Gaming ITX/ac has a total of two memory slots capable of supporting up to DDR4-3466, with a maximum capacity of up to 32 GB (2 x 16 GB) of total system memory. The single and full-length PCIe 3.0 x16 lane has a full covering of ASRock’s Steel Slot armor reinforcement to protect from heavier graphics cards. Cooling options are provided by ASRock on include a single 4-pin CPU fan header and two 4-pin headers dedicated to case fans and water pumps.

ASRock has included a single Realtek ALC1220 audio codec which has been accompanied by a pairing of Nichicon gold audio capacitors. As expected with a good quality codec present, the Realtek ALC1220 offers a total of six 3.5mm audio inputs with a single S/PDIF optical output also featured. The on-board audio supports up to 7.1 surround sound. Located across the audio section of the PCB is an Intel 3168 802.11ac 2x2 Wi-Fi module which also offers users Bluetooth 4.2 connectivity. The wired networking comes via a single LAN port and is governed by an Intel I211AT Gigabit Ethernet controller. 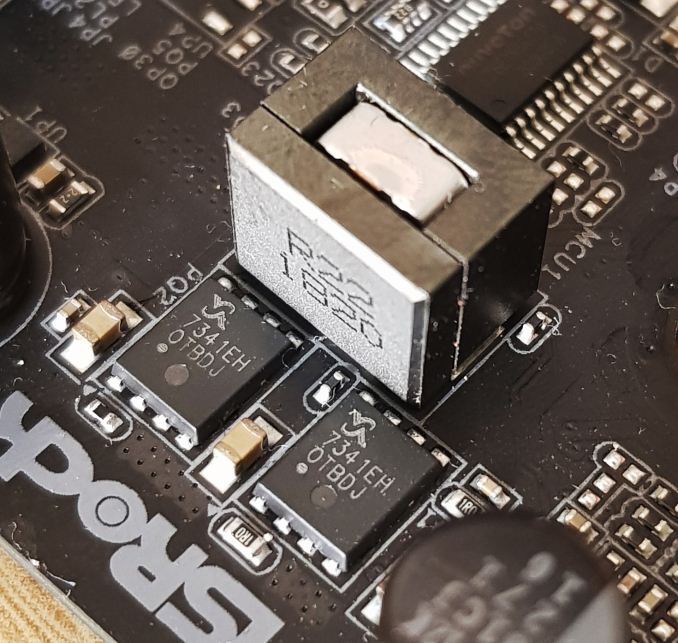 While we haven’t previously reviewed the B350 Gaming ITX/ac motherboard, we got our hands on the X370 variant, the X370 Gaming ITX/ac which as expected and offers no surprise as it shares the same power delivery as the B450 Gaming ITX/ac model. The power delivery is organized into a 6+2 configuration with a total of ten Sinopower SM7341EHKP dual N channel MOSFETs, with six dedicated to the CPU and four specifically for the SoC. Controlling the power delivery is an Intersil ISL95712 PWM regulator which is operating at 3+2. Even though each of the CPU phases connects a single driver ASRock added two phases per channel on the SoC, whereas the CPU section has a single driver per phase. A total of eight chokes are present with one choke per CPU phase and one per two phases on the SoC. While a slim red metallic heatsink covers the CPU segment of the power delivery, the SoC area is open and if making use of the B450’s overclocking functions is planned, adequate passive airflow is a necessity. 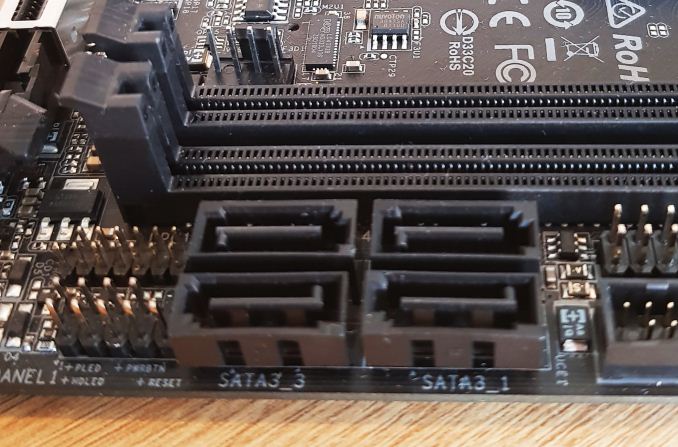 Switching the focus to storage options, the B450 Gaming ITX/ac has four SATA 6 Gbps ports with each port featuring a straight angled connector. These are located just to the right of the RAM slots and just below the USB 3.1 5 Gbps header. The SATA 6 Gbps slots have support for RAID 0, 1 and 10 arrays. 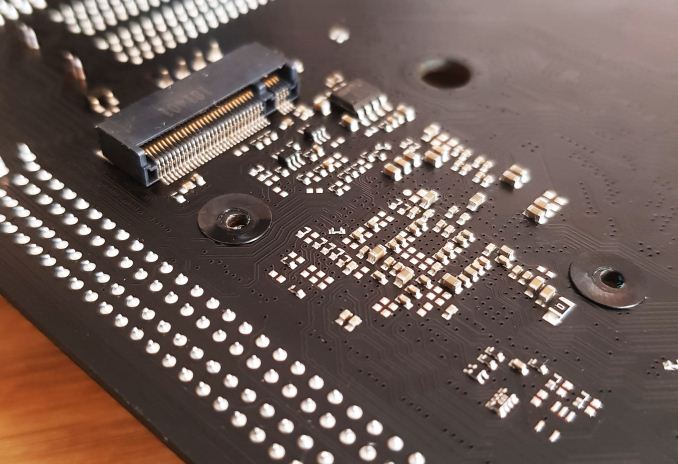 A single M.2 2280 (22 x 80 mm) slot is present and supports both PCIe 3.0 x4 and SATA SSDs. This slot is located on the rear of the PCB due to a size limitation with the miniITX form factor, supports super-fast NVMe drives and doesn’t share its bandwidth with the full-length PCIe 3.0 x16 slot.

The rear panel on the B450 Gaming ITX/ac has been bolstered over the first generation of AM4 motherboards (B350/X370) with the inclusion of a pairing of USB 3.1 10 Gbps (Type-A and Type-C) port; the Type-A comes native to the B450 chipset whereas the Type-C is thanks to the inclusion of an ASMedia ASM1543 chip. Adding to the USB connectivity is two additional USB 3.1 5 Gbps Type-A ports with a further USB 2.0 ports present. The B450 Gaming ITX/ac has support for AMD's Vega infused Ryzen APUs and while the B350 Gaming ITX/ac has dual HDMI outputs, the B450 gets an upgrade so to speak with one of the HDMI outputs being replaced with a DisplayPort 1.2 output. A total of five 3.5mm gold plated audio jacks and S/PDIF optical output make up the Realtek ALC1220 codec controlled onboard audio solution, with both wired and wireless networking coming thanks to a LAN port power by Intel’s I211AT Gigabit controller and the Wi-Fi capability coming due to an Intel 3168 802.11ac 2x2 Wi-Fi adapter; the inclusion of an Intel 3168 also offers the ability to connect with Bluetooth 4.2 devices, as well as featuring backwards compatibility. 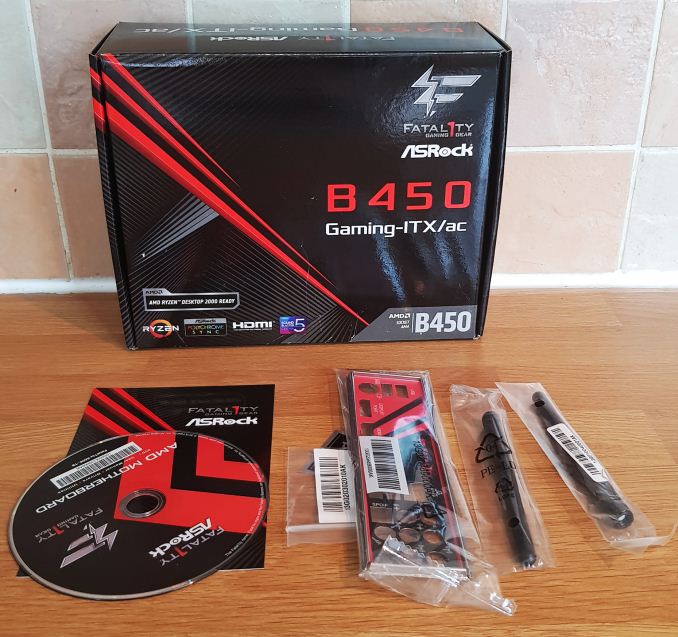 As there is little in terms of space available on a miniITX motherboard, the accessories bundle reflects this. Everything to get a system up and running is included such as SATA cables and a M.2 drive installation screw; the two antennas are also included in the bundle to get a connection to a wireless network. Inside the box we get the following: