It's been a fruitful time for AMD's CPU team over the last year, with a lot of praise heaped on its current processor product stack. The launch of the new AMD Threadripper 3970X 32-core and the Threadripper 3960X 24-core processors has brought the brand new TRX40 chipset to market, and out of all the motherboard partners, there is a new chipset and 12 new motherboards to dissect. In this article, we'll be analyzing the 12 new boards, which as a priority feature enables a PCIe 4.0 x8 link between the CPU and chipset.

One of the most important innovations with AMD's switch to the 7 nm architecture was the inclusion of PCIe 4.0. It marked the first consumer hardware to feature PCIe 4.0, which made a huge talking point during the release of the X570 chipset for the Ryzen 3000 CPUs. For the new HEDT processors, we get a new platform, and AMD's new in-house designed TRX40 chipset also integrates PCIe 4.0. This also comes with a PCIe 4.0 x8 connection between the TRX40 chipset and the new AMD Threadripper 3000 processors, quadrupling the bandwidth compared to any competitor's design.

AMD leveraged GlobalFoundries 14nm to build the TRX40 chipset, which in a maximum I/O configuration, offers 16 downstream PCIe 4.0 lanes for peripherals. Like other AMD chipsets, motherboard vendors can select between these PCIe lanes and additional SATA ports, giving board makers some flexibility between PCIe and storage. Combined with the 56 free lanes from the CPU, motherboard makers have a maximum of 72 PCIe 4.0 lanes to work with in building their motherboards. 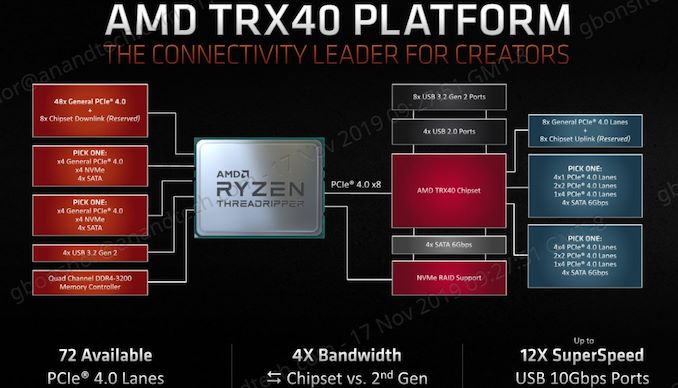 Another high point is lots of native support for USB 3.1 G2. Up to 12 USB 3.1 G2 ports are supported at the chipset level - this is a massive jump over X399 which supported just two natively. AMD's TRX40 chipset also has support for four USB 2.0, with extra USB 3.1 G1 available through additional controllers integrated into models. This is why some models opt to use USB 2.0 ports to complement the USB 3.1 G2 on the rear panel where required.

One big aspect motherboard vendors have been focusing on is the power delivery. The two new processors for launch day come in at an impressive 280 W TDP, with the newly announced Threadripper 3990X with 64 cores and 128 threads also having a TDP of 280 W. The motherboards have to be solidly built for these, so it's unlikely we will see something 'cheap' in this market space.

The biggest differences from TRX40 from the previous X399 chipset is the addition of PCIe 4.0 replacing the older PCIe 3.0. This brings extra bandwidth advantages for PCIe devices, such as M.2 drives as the PCIe 4.0 SSD controllers mature. The TRX40 chipset is based on the 14 nm process node from Global Foundries.

The high TDP was one of the caveats of the mainstream X570 chipset, due to the higher power requirements of PCIe 4.0. As a result, motherboard vendors implemented actively cooled heatsinks to help keep the chipset cool. With TRX40, we are in the same ballpark for chipset TDP, however with the beefier CPUs supported, there's going to be a variety of designs.

A big thing to note is that TRX40 based motherboards do not support the first and second generation Threadripper processors, eg, TR 1950X. TR 2990X. This means the AMD Ryzen Threadripper 3970X, 3960X, and next years Threadripper 3990X are the only models currently compatible with the TRX40 chipset.

AMD's transition from PGA to LGA processors at the high-end is a shift that users have gotten used to. Each pin in the socket obviously correlates to power, ground, data, and has to be built as such. Both the SP3 and sTRX4 share the same pin counts, but the move to a wider PCIe 4.0 x8 connection to the chipset has necessitated a fundamental change to socket pin outs in order to compensate. This is why the sockets are incompatible with older processors.

AMD states that even though both sockets have the same 'keying' (the plastic bits that stop you installing wrong processors), they have engineered the ID pins such that using a new processor in an old motherboard, or vice versa, will just cause the system not to boot, rather than break it. We're going to take AMD's word for that, rather than potentially break an expensive CPU/motherboard combo.

It turns out that AMD did not include any onboard passthough audio in the chipet. That means that all the motherboard vendors that are using a Realtek HD audio codec for the rear audio have had to include the ALC4050H audio codec to bridge the USB to the I2S. The Realtek ALC4050H is used to integrate a bridge between the chipset and USB 2.0 to give the Realtek ALC1220 all the necessary connectivity to the onboard audio. Most of the boards in the stack use the ALC4050H codec to power the 3.5 mm microphone input on the rear panel, as well as the front panel audio as not to waste its capability.

Naturally, we asked AMD about this. The official response from AMD reads

The TRX40 platform does not support the HD audio interface used on most desktop and mobile processors.

This means that it is down to the vendors to implement a USB audio device (Realtek ALC4050H) to enable use with the HD audio codecs on TRX40 models.

The launch of both the new Threadripper 3000 series processors, the 3970X and 3960X, has brought about a new wave of models on the new sTR4 socket. There are 12 new TRX40 models in total from the four main vendors, ASRock, ASUS, GIGABYTE, and MSI. It's not just a refresh of the older X399 hardware - the TRX40 chipset is a completely reworked design with many benefits including better componentry, more features from the chipset itself, and most notably, the TRX40 chipset is the first HEDT platform to include PCIe 4.0.

With more models expected to be announced over the coming months, below is a list of the current TRX40 product stack at launch on the 25th of November:

On the next page is a summary of each board's power delivery system, with each subsequent page containing a brief analysis/rundown of all the individual boards.