Computex 2020: Still on Schedule Despite Coronavirus, But Other Events Have Restrictions 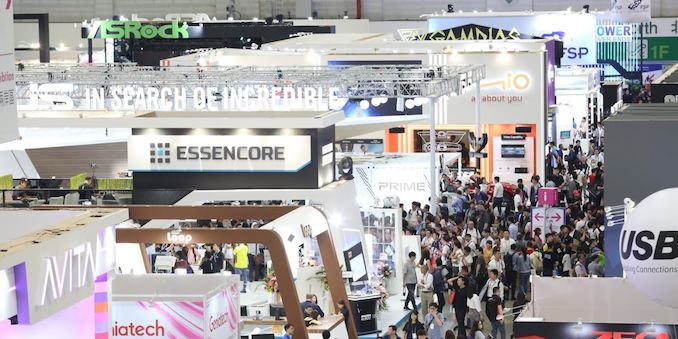 Update 6/12: Computex 2020 has now officially been cancelled. The show will return for its regular run in June of 2021.

Update 3/24: Computex 2020 has now officially been postponed due to the coronavirus pandemic. The show will now take place from September 28th to the 30th, 2020.

Here at AnandTech, our two biggest PC technology trade shows of the year are CES and Computex. We could argue until the end of time which is more important, however with the recent outbreak of Coronavirus (2019-nCoV) in China and small cases around the world, there has been some discussion among the press if Computex, held in Taiwan, will be delayed. We have received a latest update from TAITRA, the company that organizes Computex, which states that the event is still on schedule; however other events closer to today currently have restrictions.

The SARS outbreak of 2003 started in November 2002, and originated in the Guangdong province of China which borders Hong Kong. The epidemic had a final tally of 8098 cases and 774 deaths, making it very serious. Taiwan had 346 cases, with the World Health Organisation declaring Taiwan SARS-free on July 2003.

Due to the severity of the virus, TAITRA moved Computex from its usual position of early June (for 2003 it was 2nd-6th) into late September (22nd-26th). The delay announcement was made on 30th April 2003, although no date was attached at the time – the announcement was made with the assistance of a poll of already registered attendees, 1148 were polled with a 92% response rate. According to reports, 59% of attendees said they wanted to see the show postponed. Eventually the September date was chosen.

The 2019 Coronavirus outbreak started in December 2019, in the Wuhan province of north China. As of the 4th February, there are 20704 confirmed cases (20492 of which are in China), 427 deaths, and 727 recoveries. Several cities in China are still on lockdown, and in the tech world, Foxconn recently announced that it will keep its factories closed until at least February 10th, at least a week after the Chinese New Year annual holiday around this time. At present the 2019-nCoV is still a real threat, mostly contained in China, however almost a dozen countries are now also reporting at least 10 cases of the virus. Taiwan currently has 11 confirmed infections.

At present, TAITRA has started early registration for Computex 2020, which this year is still listed as scheduled for June 2nd-6th. An official news post was made on the 3rd February (yesterday), stating that the company is maintaining strict compliance with all health protocols, with the state ensuring that all visitors are undergoing thermal screening, and all medical facilities are equipped with detection and treatment rooms, regular emergency drills are taking place in medical facilities, and visitors from China are being put under heavy restrictions. It should be noted that Taiwan is often cited as having one of the best national health systems worldwide, and in the situation of an epidemic like 2019-nCoV, it is highly likely that there will be no fee to treatment for visitors due to the nature of the illness.

Unfortunately there was no mention directly of any changes to the event itself. We reached out to our contracts at Taitra, and received the following:

Taiwan has been paying close attention to the development of this virus from early on and is currently taking serious measures to reduce the damage it could make. I have attached a press statement from TAITRA related to another exhibition (TAIPEI CYCLE) which will take place in March. We have not received similar statements with regards to COMPUTEX, but I hope it answers your questions.

The event mentioned in the statement, TAIPEI CYCLE, is an annual event with 8000 attendees and 1000 exhibitors – about an order of magnitude smaller than Computex. In that document, there are two key elements to it: no Chinese exhibitors or attendees/visitors will be allowed, and all people on-site must wear facemasks. The appropriate lines are as follows.

TAITRA, as show organizer, has decided to run the 2020 Taipei Cycle Show as scheduled from March 4 to March 7. Due to the outbreak of the New Coronavirus (2019-nCoV) in China, we feel very sorry to inform you that all the Chinese exhibitors and Chinese visitors will not be able to come to Taiwan to attend the show.

TAITRA will implement the following measures in the prevention of this epidemic:

At present we have almost 2.5x the number of confirmed cases of the Coronavirus compared to SARS in its entirety, however the mortality rate is currently lower and with these numbers in mind, the decision to disallow mainland Chinese participants at the Cycle event may propagate to Computex if the situation is similar in several months. Note, it would be very difficult to have a Computex with zero mainland Chinese presence. I suspect that any company that intends to show its hardware at Computex is going to have to ensure they have relevant demo units outside of China immediately.

The next event on our calendar here at AnandTech is Mobile World Congress (MWC), the premier smartphone and mobile technology event on the calendar. This takes place in Barcelona, and we expect to have our Senior Smartphone Editor Andrei Frumusanu on the ground at the event. On January 31st, GSMA, the company that organizes the event, released a statement saying that the event will proceed as planned.

In the statement, GSMA also stated that it will be closely adhering to WHO recommendations, providing extra sanitation services especially in high-traffic areas such as hallways, handrails, bathrooms, and public touch screens, increased onsite medical support and medical notices, improved employee training on the matter, and closer booth-to-booth inspection for sanitary conditions. At present no attendees are restricted from the event, only by the local authority rules at ports of entry.

Given the timeline of the SARS outbreak, we might expect closer to the time TAITRA start to distribute questionnaires to pre-registered attendees about their thoughts on the Coronavirus, depending on if it keeps spreading or if a relevant and quicker cure is found. As the situation develops, we will update this news post.