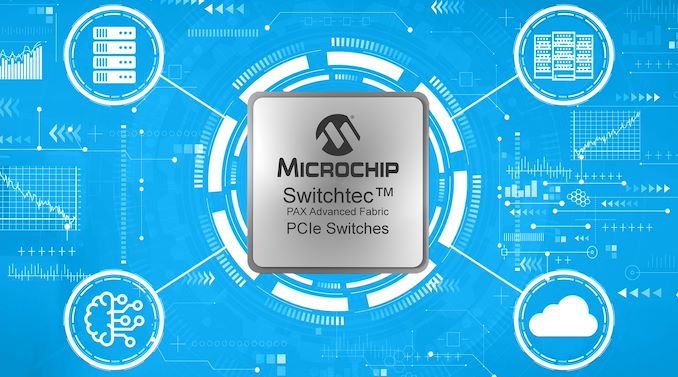 There are multiple reasons to need a PCIe switch. These can include expanding PCIe connectivity to more devices than the CPU is capable, to extend a PCIe fabric across multiple hosts, to generate failover support, or to increase device-to-device communication bandwidth in limited scenarios. With the advent of PCIe 4.0 processors and devices such as graphics, SSDs and FPGAs, an upgrade from the range of PCIe 3.0 switches to PCIe 4.0 was needed. Microchip has recently announced its new Switchtec PAX line of PCIe Switches, offering up to 100 lane variants supporting 52 devices and 174 GBps switching capabilities.

For readers not embedded in the enterprise world, you may remember in the past we have had a number of PCIe switches enter the consumer market. Initially we saw devices like the nF200 appear on high-end motherboards like the EVGA SR2, and then the PLX PEX switches on Z77 motherboards allowing 16-lane CPUs to offer 32 lanes of connectivity. Some vendors even went a bit overboard, offering dual switches and up to 22 SATA ports with an add-in LSI Raid controller with four-way SLI connectivity, all through a 16-lane CPU.

Recently, we haven’t seen much consumer use of these big PCIe switches. This is due to a couple of main factors – PLX was acquired by Avago in 2014 in a deal that valued the company at $300m, and seemingly overnight the cost of these switches increased three-fold according to my sources at the time, making them unpalatable for consumer use. The next generation of PEX 9000 switches were, by contrast to the PEX 8000 we saw in the consumer space, feature laden with switch-to-switch fabric connectivity and failover support. Avago then purchased Broadcom, and renamed themselves Broadcom, but the situation is still the same, with the switches focused in the server space and making the market ripe for competition. Enter Microchip.

Microchip has been on my radar for a while, and I met with them at Supercomputing 2019. At the time, when asked about PCIe 4.0 switches, I was told ‘soon’. The new Switchtec PAX switches are that line. 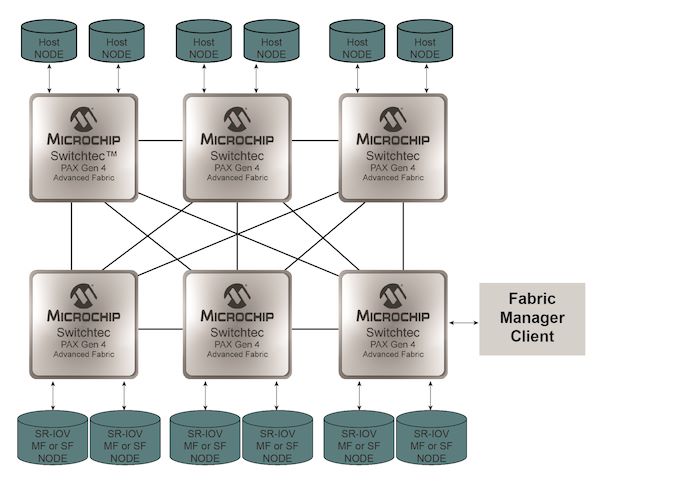 There will be six products, varying from 28-lane to 100-lane support, and bifurcation down to x1. These switches operate in an all-to-all capacity, meaning any lane can be upstream or downstream supported. Thus if a customer wanted a 1-to-99 conversion, despite the potential bottleneck, it would be possible. The new switches support hot-plug per-port, operate low-power Serdes connections, support OCuLink, and can be used with passive, managed, or optical cabling.

Customers for these switches will have access to real-time diagnostics for signaling, as well as fabric management software for the end-point systems. The all-to-all connectivity supports partial chip failure and bypass, along with partial reset features. This makes building a fabric across multiple hosts and devices fairly straightforward, with a variety of topologies supported.

When asked, pricing was given, which means it will depend on the customer and volume. We can imagine a vendor like Dell or Supermicro if they haven’t got fixed contracts with Broadcom switches to perhaps look into these solutions for distributed implementations or storage devices. Some of the second/third tier server vendors I spoke to at Computex were only just deploying PEX 9000-series switches, so perhaps deployment of Gen 4 switches might be more of a 2021/2022 target.

Users looking for a PCIe switch enabled consumer motherboard should look at Supermicro’s new Z490 motherboards. Both are using PEX 8747 chips to expand the PCIe offering on Intel’s Comet Lake from 16 lanes to 32 lanes.