We explained that this is a gaming-oriented phone first and foremost, so we should of course cover its unique gaming features. Starting off with the physical, we should talk about the new AeroActive Cooler 3, ASUS’s active cooling solution for the ROG Phone III. 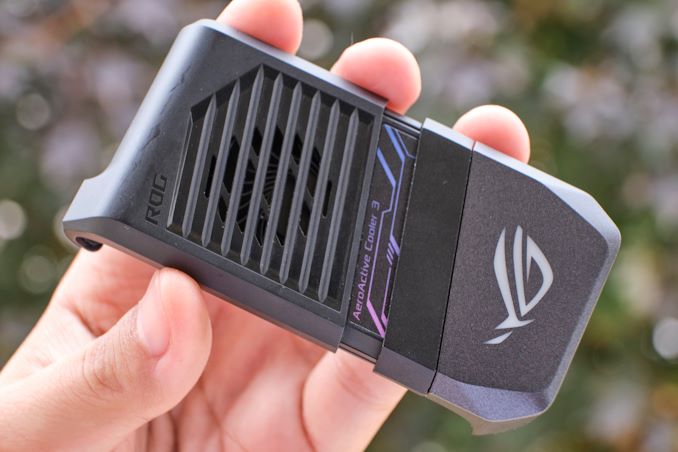 The accessory comes included by default with the phone which is a positive as it’s essentially the key add-on that’s supposed to make the ROG3 what it is.

The cooler accessory is quite light-weight at 38g and is made of plastic. It’s primarily made of two separate sections with the whole unit extending out to be able to grip around the phone when connected. The ROG logo at the back as well as the “Republic of Gamers” label on the front are RGB and light up in the same fashion as the ROG logo on the back of the phone. 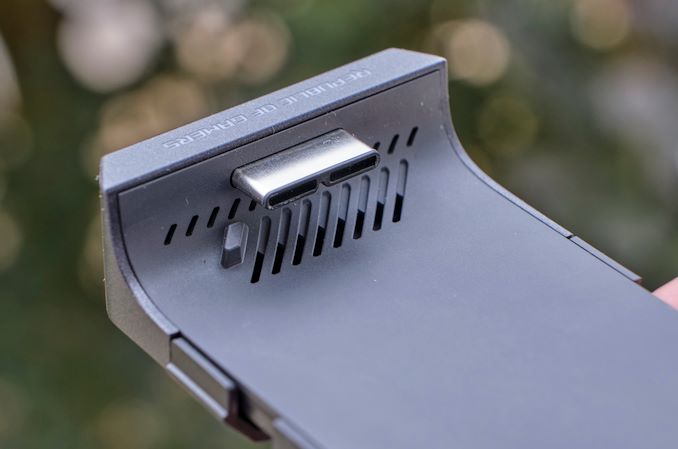 The inside part of the cooler contains the dual USB-C connector that attaches to the phone, with the other side only having a little plastic hook that wraps around the side-frame of the right side of the phone, below the power button. 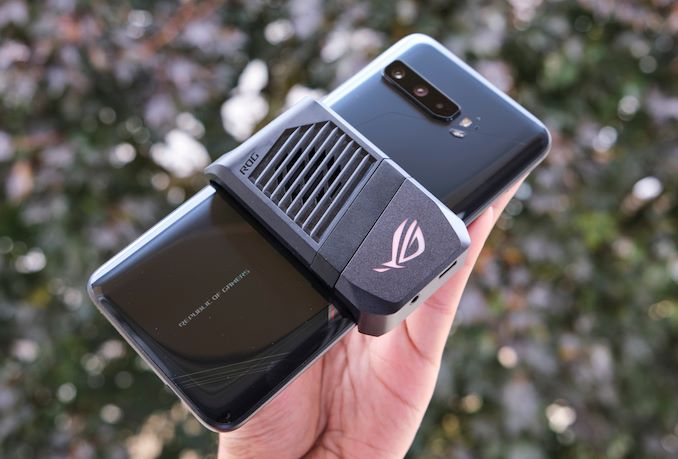 When holding the phone in landscape the cooler is well positioned and really doesn’t get into your way of things which is good – it does however significantly increase the size of the phone as a whole if you’re to carry it around in your pocket in this way. 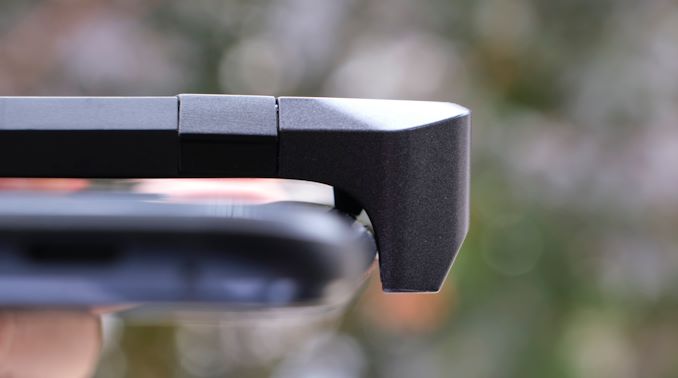 The interesting aspect of the cooler is exactly how it cools the phone. This actually isn’t a fan that is supposed to be blowing air onto the back of the phone, as in the earlier picture you see that there’s essentially no ventilation holes that actually blow to that part of the phone. There’s also a noticeable gap in-between the cooler and the phone itself, and the tiny fan hardly generates enough pressure to get enough airflow at the phone’s surface.

What I think actually happens is that the AeroCooler is cooling the phone via the USB-C connectors. The combo-connector lies on the motherboard directly next to the SoC as well as the small metal heatsink underneath the back glass. My theory is that heat is being transferred from the motherboard through the quite large double USB-C connectors to the AeroCooler itself, which dissipates this internally and vents out through the slits on this side of the phone.

By the way, that small slit on the phone itself isn’t even covered by the AeroCooler vents, which further reinforces my notion that it’s just there for design and doesn’t have any practical use for cooling of the phone. 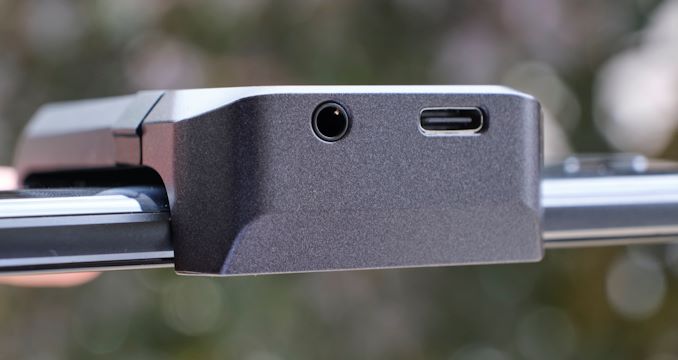 The AeroCooler has a 3.5mm headphone jack as well as a functional USB-C port. It’s a pity that this is the only way to get audio out of the phone – there’s no other 3.5mm adapter included in the box.

Software, wise, there’s two ways to take advantage of ASUS’s gaming features. In general use, you can switch the whole phone into “X-Mode” from the notification area toggle.

X-Mode has three settings levels by default here, LV1, LV2, and LV3, all differing in their performance and well as thermal limits tunings. LV1 merely boosts CPU minimum frequencies to a higher minimum, partly disabling “normal” DVFS operation. LV2 further raises these minimums as well as raises the thermal throttling temperature limits of the phone – in general LV1 will allow for skin temperatures up to 37°C, while LV2 will go up to around 45°C peaks.

LV3 will completely disable DVFS of the SoC and run the CPUs and GPU at maximum frequency all the time – the caveat here is that this mode can only be enabled when the AeroCooler is connected.

Beyond the global X-Mode settings, you can also fine-tune things via ASUS’s Armory Crate application, where you can set per-app profiles and in which you have a ton more options beyond the three X-Mode levels.

There are simplified controls in which you can set the three DVFS minimum control as well as thermal throttling limitations, or you can go fine-tune things via the advanced controls.

The advanced controls are indeed quite advanced and allow you to fully control essentially all DVFS tuneables of the CPU, GPU, memory controller drivers, as well as fine-tune the system schedulers and even I/O performance settings. Pretty much ASUS gives you full control over this aspect of the device, controls you usually only would have if you had rooted your phone.

The other important Armory Crate setting is the refresh rate configuration page where ASUS also exposes an anti-aliasing toggle for 4xMSAA, something that I think is very nice to have given a lot of games nowadays still don’t allow for full native rendering resolutions.

ASUS’s game engine is a in-game control panel which can be called up by swiping from the left of the screen while in an app or a game, and gives you various nifty features that might be useful to you while gaming.

The most important feature here beyond your slew of system setting toggles, performance settings shortcuts, and other gimmicks, is the ability to set up the air triggers of the phone and set their inputs to the game you’re playing.

The air-triggers are in my opinion still the single most important aspect of the ROG Phone III as a gaming phone as it really gives you that extra control ability, especially in 3D shooter games. This allowed me seamless moving, aiming, and shooting all simultaneously, which might be a little more hindersome on other traditional phones.

The one disappointing aspect of the phone in games was the refresh-rate: Although the phone goes up to 144Hz, there’s very little games out there which can actually take advantage of this. For example in the PUBG session above, the game still capped out at 60fps rendering, and given this is one of the most popular games on the market, it does more significantly reduce the value of the high-refresh-rate screen for gaming.