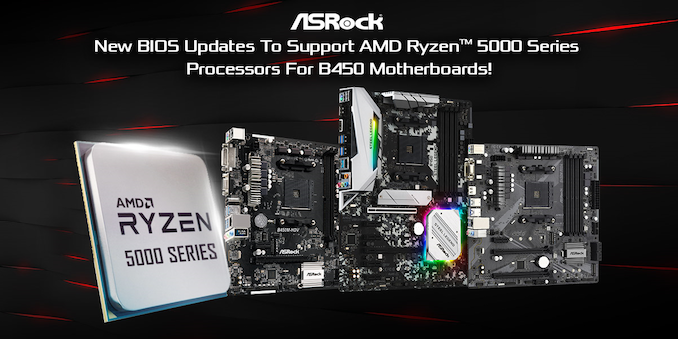 One of the big unknowns for the newest AMD Ryzen 5000 processors is whether or not there will be support on all 400 series chipset-based motherboards. After initially saying that these motherboards would not be supported, AMD reversed course and said it would work with motherboard vendors to enable support. At the point when the processors were launched, AMD confirmed that the schedule for the first beta BIOSes for 400-series motherboards to support Ryzen 5000 would be in the January timeframe. It would appear that ASRock has beaten that estimate by six weeks.

One of the main barriers to this support is both the chipset and the BIOS firmware. Supporting a new generation of processors increases the side of the firmware, and some of the 400-series motherboards were not built for large firmware packages. This means that in order to support newer processors, sometimes support for older processors is lost. There are also some complications as it relates to new power management modes on the Ryzen 5000, which require chipset support, and so building a firmware/AGESA package that can enable this (or fool the software/sensors that require it) had to be newly built for 400-series motherboards.

Today, ASRock Is claiming that it has first revision beta BIOS firmware for its B450 series ready to go. These firmware packages should enable support for Ryzen 5000 processors on the respective B450 motherboards. Users should note that upgrading most of these motherboards requires a currently supported processor, unless the motherboard supports any sort of non-powered BIOS update function. These firmware packages are also expected to keep support for Ryzen 3000 processors as well, but not Ryzen 2000 or Ryzen 1000.

As with all beta BIOS firmware, your mileage may vary and there may still be bugs in a variety of settings or full performance may not yet be available. Warranty is often not applicable for users running a beta BIOS.

Update: it would appear that some of these BIOSes have already been pulled from the ASRock website, for reasons unclear.