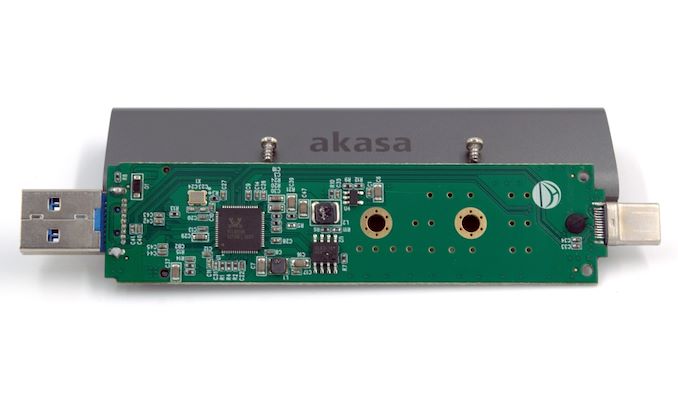 The internal storage device market segment has seen rapid evolution over the last decade after the introduction of flash-based disk drives. Beginning with 2.5-inch SSDs in early 2010s, the market moved to mSATA units while the SATA-to-NVMe transition started to gather steam. Fast forward to the present, and we find M.2 2280 PCIe 3.0 x4 NVMe SSDs the de-facto standard even for entry-level PCs.

PCIe 4.0 NVMe SSDs are slowly making its way into the market, and many users are finding themselves with spare M.2 SSDs. A common re-purposing method has been to place the SSD in a USB enclosure. Having reviewed multiple storage bridges and enclosures, we have found that companies typically target this market segment with a new product every couple of years (based on the internal drive characteristics going out of fashion / latest USB generation).

Akasa is one of the few manufacturers to possess a SSD enclosure lineup catering to almost all possible scenarios in this market segment. Earlier this year, the company sampled their lineup of M.2 SSD enclosures lineup - the Akasa AK-ENU3M2-02 (SATA), AK-ENU3M2-03 (NVMe), and the AK-ENU3M2-04 (SATA / NVMe) - to put through our storage bridges evaluation routine. All three enclosures come with a USB 3.2 Gen 2 (10 Gbps) host interface. This review takes a look at the performance of each enclosure, their unique aspects, and usage scenarios.

SSDs have grown both in storage capacity as well as speeds over the last decade, thanks to rapid advancements in flash technology (including the advent of 3D NAND and NVMe). Starting from 2.5-inch disk drives barely able to saturate the SATA III (6 Gbps) interface in the early 2010s, we now have gumstick- and palm-sized drives with PCIe 4.0 support capable of sustaining more than 7000 MBps (56 Gbps).

These SSDs have also formed the base platform for portable SSDs. Traditionally, such drives have fallen into one of the six categories below, depending on the performance profile and internal components. Recently, we have seen direct flash-to-USB controllers across all but the highest performance tier listed here.

In addition to portable SSDs, this type of segmentation is also applicable to storage enclosures. Since the mid-2010s, we have seen a regular stream of SSD enclosures hit the market, catering to 2.5-inch, mSATA, and M.2 form-factors.

This review takes a look at three Akasa M.2 SSD enclosures catering to PC users attempting to give new life to their spare SSDs. Irrespective of the M.2 SSD type, Akasa believes that one of the following three enclosures is bound to satisfy the user requirements.

The AK-ENU3M2-04 is the most interesting of the lot. In addition to supporting both SATA and NVMe SSDs, it also sports Type-A and Type-C male connectors. There is no cable to carry around / misplace, and the dual interface ensures that it is compatible with a wide range of systems. In addition, the tool-less design ensures that swapping SSDs is quick and painless. Overall, the AK-ENU3M2-04 ticks all the boxes for becoming part of the arsenal of computer support personnel. 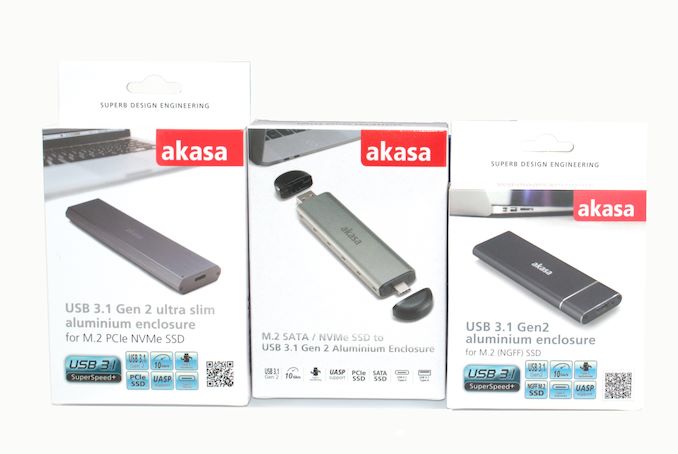 The table below presents a comparative view of the specifications of the different storage bridges presented in this review.

The galleries below bring out the industrial design of the enclosures as well as the package contents. 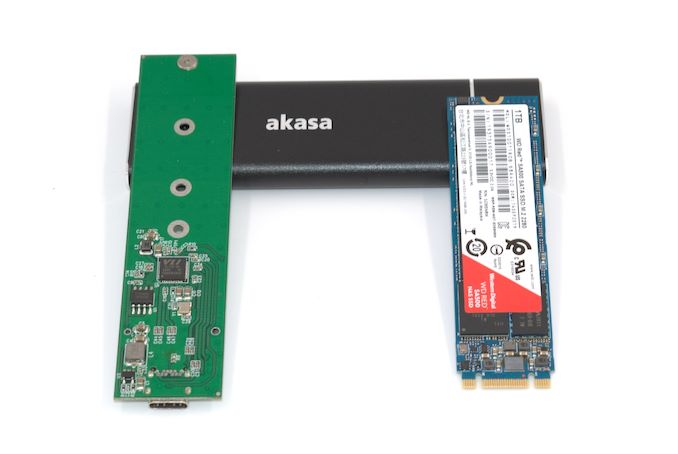 The Akasa AK-ENU3M2-02 is a M.2 SATA SSD aluminum enclosure with a USB 3.2 Gen 2 (10Gbps) Type-C interface. Since SATA SSDs do not go beyond 560 MBps, such enclosures have minimal thermal solution requirements. The enclosure supports both B-key and B+M-key SSDs with lengths from 30mm up to 80mm. Type-C to Type-C, and Type-C to Type-A cables are supplied. Disassembling the enclosure involves removing four screws at either end. A screwdriver is also included in the package. Spare side panels are supplied along with the package, as shown in the gallery above. The VIA Labs VL716 bridge chip can also be seen in the underside of the mainboard. The SSD is mounted using a pre-installed screw mechanism.

The Akasa AK-ENU3M2-03 is a M.2 PCIe NVMe SSD brushed aluminum enclosure with a USB 3.2 Gen 2 (10Gbps) Type-C interface. Since SSDs in such enclosures can reach speeds of more than 1 GBps, thermal pads are required to complement the metal enclosure. SSDs installed in the AK-ENU3M2-03 operate in PCIe 3.0 x2 mode. The enclosure supports both B-key and B+M-key SSDs with lengths from 30mm up to 80mm. A single Type-C to Type-C cable is supplied. Disassembling the enclosure involves removing four screws at either end. A screwdriver is also bundled in the package. A single spare panel with the Type-C port cut out is provided along with the thermal pads, as shown in the gallery below.

The main board is a single-sided one, with the ASMedia ASM2362 bridge chip placed between the Type-C port and the M.2 slot. The SSD is mounted using a pre-installed screw mechanism. The enclosure could potentially be made smaller by moving the bridge chip to the underside of the board. One thermal pad is meant for mounting on the bridge chip, and another on the SSD. The SSD pad is sized for a M.2 2230 unit, which unfortunately doesn't provide an optimal thermal solution for other sizes. Inserting the mainboard back into the enclosure is slightly messy, as the pad tends to break up into chunks easily upon sliding over the inner metal surface. On the positive side, this implies good contact allowing the enclosure to draw heat away from the thermal pad in an effective manner.

The Akasa AK-ENU3M2-04 is the unique solution in the lot being considered today. While there are plenty of M.2 SATA and NVMe to USB-C enclosures in the market, the AK-ENU3M2-04 sports a host of unique features:

The enclosure supports M.2 SSDs (B-key and B+M-key) ranging in lengths from 42mm to 80mm (M.2 2230 is not supported, unlike the other two enclosures above). The package includes the main unit and a carrying pouch. A spare side panel (that is slid out to access the mainboard) and a spare rubber retention peg are also included, as shown in the gallery below. 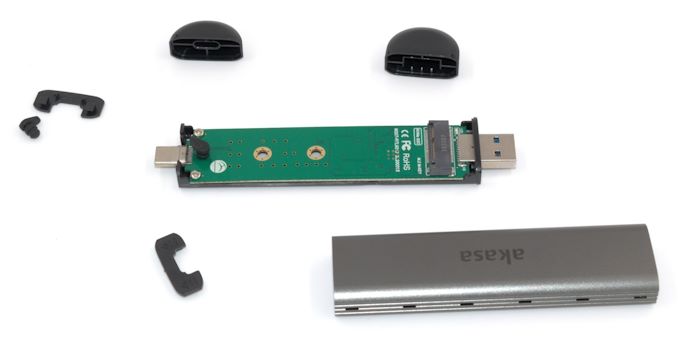 While the enclosure itself is fully aluminum, plastic caps are placed at either end to protect the USB connectors. Accessing the mainboard involves sliding out the side panel (directions embossed on the panel) and pulling out the board using the Type-A connector. The M.2 retention peg is preinstalled for a M.2 2280 SSD. Moving it to the 2260 or 2242 holes doesn't involve dismounting the board, but we dismounted it anyway to get a view of the bridge chip on the other side. The Realtek RTL9210B-CG bridge chip runs the show in this enclosure. The product ticks multiple boxes, but one of the missing aspects is the thermal solution. Our evaluation process looks into the side-effects of this, as detailed further down in the review. 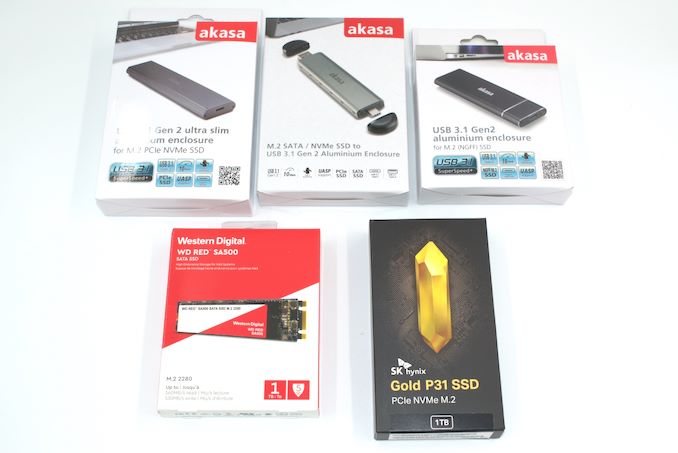 Using the same SSD across different enclosures allows us to make apples-to-apples comparisons related to the thermal solution and other aspects. All the enclosures support S.M.A.R.T passthrough and TRIM functionality, as shown in the CrystalDiskInfo screenshots below.

Prior to looking at the benchmark numbers, power consumption, and thermal solution effectiveness of the different storage enclosures, a description of the testbed setup and evaluation methodology is provided.

The most attractive aspect of the Quartz Canyon NUC is the presence of two PCIe slots (electrically, x16 and x4) for add-in cards. In the absence of a discrete GPU - for which there is no need in a DAS testbed - both slots are available. In fact, we also added a spare SanDisk Extreme PRO M.2 NVMe SSD to the CPU direct-attached M.2 22110 slot in the baseboard in order to avoid DMI bottlenecks when evaluating Thunderbolt 3 devices. This still allows for two add-in cards operating at x8 (x16 electrical) and x4 (x4 electrical). Since the Quartz Canyon NUC doesn't have a native USB 3.2 Gen 2x2 port, Silverstone's SST-ECU06 add-in card was installed in the x4 slot. All non-Thunderbolt devices are tested using the Type-C port enabled by the SST-ECU06.

The specifications of the testbed are summarized in the table below:

The testbed hardware is only one segment of the evaluation. Over the last few years, the typical direct-attached storage workloads for memory cards have also evolved. High bit-rate 4K videos at 60fps have become quite common, and 8K videos are starting to make an appearance. Game install sizes have also grown steadily even in portable game consoles, thanks to high resolution textures and artwork. Keeping these in mind, our evaluation scheme for portable SSDs and UFDs involves multiple workloads which are described in detail in the corresponding sections.

A comprehensive overview of the performance of the different Akasa enclosures is provided in the following sections. Prior to providing concluding remarks, we have some observations on the power efficiency aspect also.