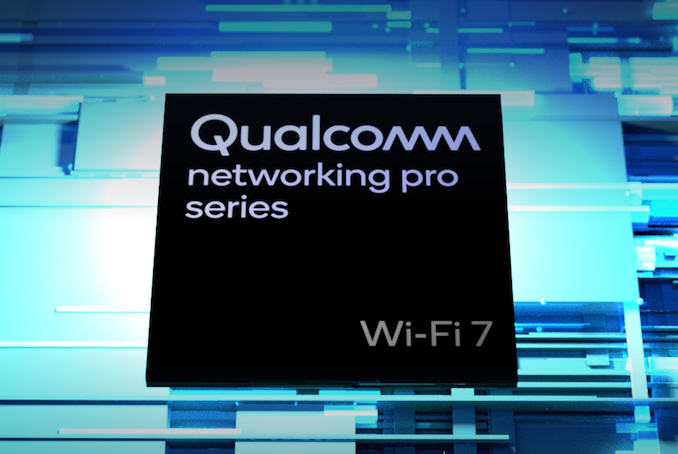 The last few months have seen multiple vendors launch products in the Wi-Fi 7 (802.11be) space. Mediatek demonstrated working 802.11be-compliant silicon under the Filogic lineup earlier this year. Concrete technical details and part numbers were not announced during the event. Last month, Broadcom introduced a comprehensive Wi-Fi 7 portfolio, detailing multiple 802.11be radios for access points, a networking SoC built keeping 802.11be bandwidth in mind, and a client radio for mobile applications.

The 802.11 Working Group's focus with 802.11be has been on extremely high throughput. This has been achieved primarily through a combination of three different aspects:

It must be noted that wider channels are available only in the 5 GHz and 6 GHz bands.

Theoretically, these aspects allow for up to around 46 Gbps of wireless throughput. 802.11be also aims to enable usage of Wi-Fi for real-time applications by including features for low-latency communications such as Multi-link operation (MLO). This allows a client and an access point to simultaneously communicate over multiple channels that might even belong to different bands. 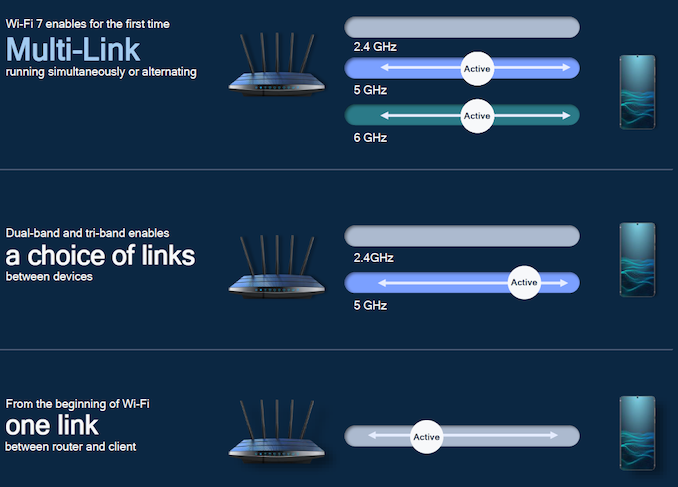 The 802.11be specifications also allow for better performance in environments with heavy interference by permitting adaptive puncturing - the desired channel need not be necessarily contiguous. This improves on the preamble puncturing feature already available as part of the 802.11ax specifications. 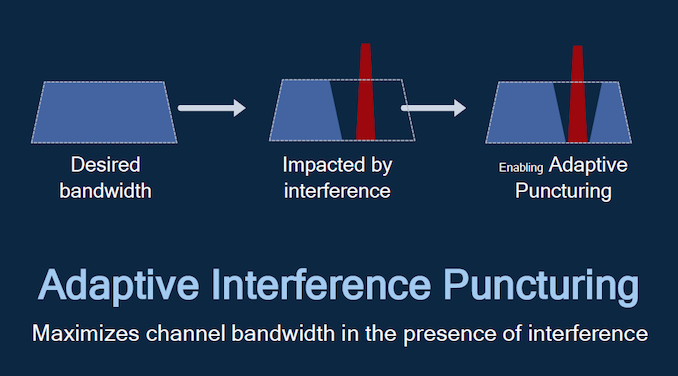 Interference and co-existence with non-Wi-Fi users of the same spectrum is handled using automatic frequency coordination (AFC). Unlike the Open AFC initiative (of which Broadcom is a part), Qualcomm is opting to provide its own turnkey solution for its customers.

As expected, AFC will require the device agent to be connected to the Internet for channel configuration and power modulation purposes.

At MWC 2022, Qualcomm had provided details of their 802.11be client silicon targeting mobile devices. The FastConnect 7800 is expected to become available in H2 2022, and integrates Bluetooth 5.3 support with key Wi-Fi 7 features. Today, the company is introducing its Wi-Fi 7 Networking Pro Series access point platforms to expand its Wi-Fi 7 portfolio. 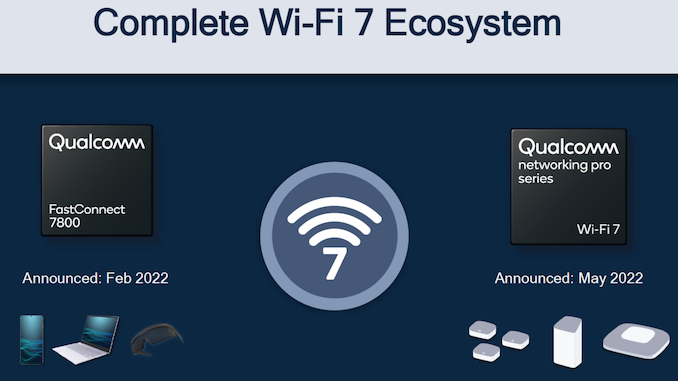 Qualcomm started marketing its Wi-Fi solutions under the Networking Pro and FastConnect monikers back in 2019, with the launch of its Wi-Fi 6 solutions. The 2nd generation products catered to the Wi-Fi 6E ecosystem, and it comes as no surprise that today's 3rd Gen. launch focuses on Wi-Fi 7.

The introduction of the Networking Pro tag has contributed to opaqueness in the composition of the router / AP platforms from a end-consumer perspective. Unlike Broadcom's public announcement of core details of the networking SoC, and characteristics of the various radio options for its reference designs, Qualcomm provides these details only to their customers. Eventually, these details do become public after market availability of the products. For example, the Networking Pro 800 platform's breakdown is available here - we see a core WiSoC with integrated MAC and baseband coupled with discrete radios. Therefore, it is disappointing that Qualcomm has not given us much to analyze in today's announcements beyond basic product specifications. These high-level feature specifications match the features in Broadcom's products announced last month. 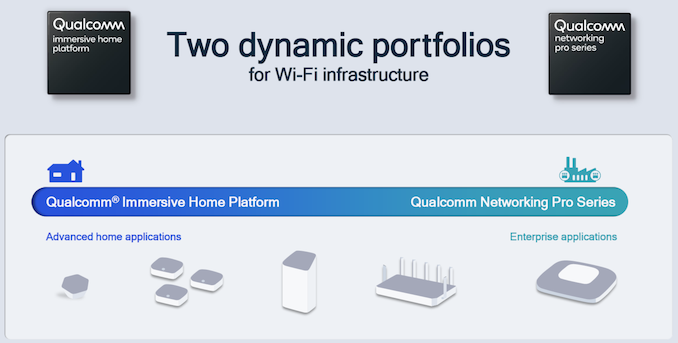 It must be noted that Qualcomm also provides the 'Immersive Home' platform for entry-level Wi-Fi routers. These are typically similar to the 'Networking Pro' platforms, except for cut-down stream counts and reduced WiSoC capabilities in terms of CPU core counts and frequencies. Given that Qualcomm refused to provide any details of CPU core counts or frequencies for the Networking Pro series being launched today, we need to wait for an official announcement related to their Wi-Fi 7 portfolio for the cost-sensitive segment. 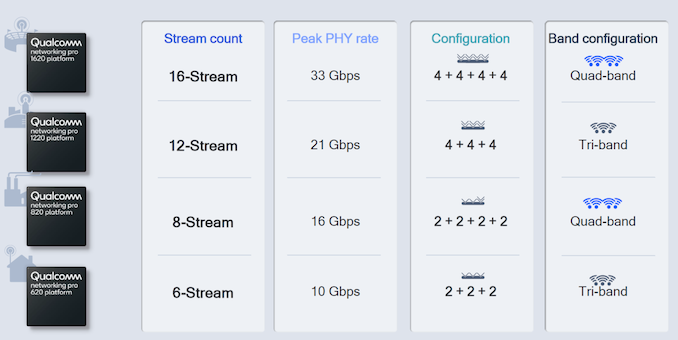 Qualcomm claims peak system PHY rates of up to 33 Gbps, and per-channel wireless PHY rates of more than 10 Gbps, with the capability of supporting more than 500 users in each channel.

The availability of 6 GHz spectrum for Wi-Fi is not universal. Qualcomm indicated that different configurations of the Networking Pro 3rd Gen series are possible, based on the allocation.

Qualcomm's Wi-Fi 7 Networking Pro series will allow its customers to create a wide range of enterprise-class and premium wireless access points / routers. The platforms are already sampling - we should be seeing market availability of BE10000, BE16000, BE21000, and BE33000 Wi-Fi routers based on them in a few quarters.

5G-based fixed wireless access is fast becoming an attractive option for many consumers - sometimes even as the primary broadband connection. Qualcomm's strengths in 5G will act as an asset from a bundling perspective for integrated Wi-Fi 7 / 5G platforms. However, Broadcom has significant presence with service providers for 10G PON and DOCSIS 4.0. It is likely that those high-speed ISPs will find Broadcom's possible bundled offerings attractive for their Wi-Fi 7-capable consumer gateways. While we wait for Mediatek and MaxLinear (to whom Intel sold their Home Gateway Platform Division) to reveal their Wi-Fi 7 cards fully, it appears that initial battle will be between products based on Qualcomm's 3rd Gen. Networking Pro series and those using Broadcom's Wi-Fi 7 portfolio.