A couple years back, ASUS released the first netbook on an unsuspecting world. Compared to the UMPCs and other tiny handhelds that preceded it, the Eee PC offered more in some areas and cost a lot less - and compared to ultraportables, it was smaller and cost about one fifth as much! Many consumers fell in love with the netbook, and now every major laptop company has some form of netbook. Intel just released the Pine Trail platform that updates Atom in a few areas, but Pine Trail is less about improving performance and more about reducing costs - mostly Intel's costs, as the new netbooks all cost the same or slightly more than preceding models. So yes, Atom is undoubtedly a success, but are Atom-based netbooks truly good are they just a current fad? To answer that question, we need to look at the next step up the mobile ladder: Intel's CULV platform.

CULV (Consumer Ultra Low Voltage) processors have been around for a while, but where formerly they were the domain of $1500+ ultraportables, netbooks have forced them into much lower price brackets. If the choice is between a $330 Pine Trail unit and a $1500 CULV, few would opt for the latter; today, the difference is a lot less, with some CULV designs starting as low as $400. It's no surprise that the least expensive models are more difficult to find in stock, and we're left to wonder if the problem is inadequate production or if the manufacturers are intentionally producing low volumes with the hope of getting more users to spring for higher cost offerings. Realistically, you're far more likely to find CULV laptops priced around $600, but a quick search turns up quite a few priced under $450 (though admittedly many vendors are backordered). Even at twice the cost of a netbook you should give them serious consideration, and in this roundup we'll show you why. 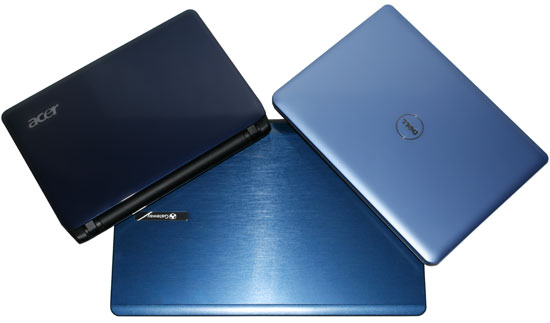 There are a few other items to note. First, of the current CULV processors, only the Pentium SU4100 and SU2700 lack virtualization (VT-x) hardware support. Most users are unlikely to need the feature, unless they plan on installing Windows 7 Professional and running the XP virtual machine. Oddly enough, the Core 2 Solo SU3300 includes VT-x but skips xD (Execute Disable). The single-core Solo CPUs also have a lower TDP of just 5.5W, putting them in direct competition with Atom; they'll be faster in single-threaded tasks and very similar in multi-threaded tasks. Given the pricing, however, we recommend against buying any of the Core 2 Solo solutions; the jump to dual-core is definitely noticeable and the price of the CPUs actually makes many of the Core 2 Solo laptops as expensive as SU2300/SU4100 offerings.

If performance isn't going to be the big differentiator (with some exceptions like high-end laptops with SU9000 CPUs and SSDs in place of hard drives), what you really need to pay attention to are the other features and the overall design. Specifically, we'll look at the keyboard, touchpad, LCD, and battery life in our roundup of CULV laptops today. We'll also look at other features that differentiate the laptops. We've got three models from Acer, Dell, and Gateway, and as you'll see performance is very much a wash between them.

These laptops are representative of what you'll find with most other CULV offerings, but you can still decide between a larger or smaller chassis and some other items. Some of the differences are easy to analyze even without using a laptop in person: a larger chassis will weigh slightly more and you might get an optical drive, or you might find a few select companies offering a higher resolution LCD. What we can't say is whether these other laptops have better LCDs or not (most likely not, though the higher resolution would still be a benefit), how the keyboard and touchpad feel, or if there are other useful features that aren't immediately visible. Ultimately, price is often the biggest factor, with entry-level CULV designs starting at around $400 (if you can find them in stock) and most ranging up to $650. Beyond that, there are designer CULV laptops and business tablets that can push pricing into the $1500+ range, but we aren't looking at that category in this roundup.