Fast Hardware in a Candy Shell?

Around here it's fair to say we've been...unkind...towards Clevo's notebook builds. There's good reason for that: Clevo notebooks may support some of the fastest mobile hardware available, but they haven't traditionally housed it in the nicest chassis. When Jarred reviewed the Clevo X7200, he found that had changed somewhat, and the P170HM seems to be another moderate step forward.

Superficially the P170HM is very clearly a Clevo design, and as a result is utterly devoid of color. Black is always going to be in fashion so there's no real argument here: the lid is black aluminum with a glossy black plastic trim that feels like the kind of accent glossy plastic was always best suited for. That understated use of glossy plastic continues when we open the notebook.

Except on the screen bezel. I am utterly mystified as to why the screen bezel has become the last outpost for glossy plastic on modern notebooks when it's one of the worst places for the material. The reflective nature of it is distracting and liable to only further irritate users who have largely grown weary of screens with glossy finishes. Mercifully the gloss only materializes in one other place: a tasteful trim around the aluminum palm rest beneath the keyboard. The rest of the interior surfaces of the P170HM (excluding the white-LED infused indicator bar) are a black matte plastic that seems sturdy enough if a little chintzy. 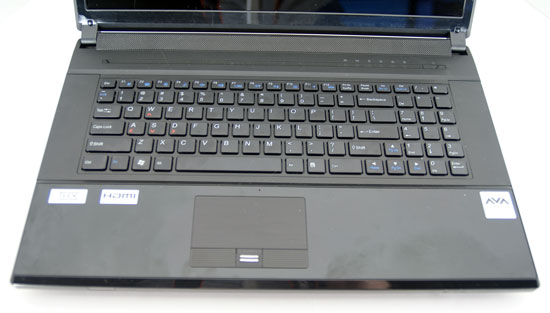 The keyboard, of course, remains the bane of Jarred's existence. That's understandable: as far as chiclet keyboards go, Clevo's remain among the worst we've seen. The keys are loose, extremely clicky, and you can hear the entire keyboard rattle if you're a key abuser like I am. Worse still, the layout is utterly moronic and Clevo seems steadfast in their refusal to change it. There's a massive amount of wasted space on either side of the keyboard on this chassis (and indeed, even on the 15.6" models), and the non-standard layout of the 10-key makes it next to useless. The whole point of a 10-key is to be able to use it by touch in a hurry, not to be constantly perplexed as to why the enter key is where the decimal point is supposed to be. This is a completely thoughtless design, but on the bright side Clevo did make one update to their keyboard: they painted red arrows on the W-A-S-D cluster. Because that was what was poorly engineered and unintuitive.

Fortunately the rest of the build is still a step up and feels less brutally cheap than old Clevo notebooks. There's still a way to go; a notebook this pricey (and it costs this much just about everywhere, so you can't fault AVADirect) should have a classier, sturdier chassis, especially given the expensive and powerful components it was designed to house. Hopefully if we keep harping about this eventually someone at Clevo will get the memo, but until then you should feel at least reasonably confident that the P170HM has a better build than its predecessors did.