The last time we checked in with Puget Systems, we came away impressed with their Serenity SPCR Edition. It wasn't the fastest machine we've ever tested, but it was extremely well put together and almost completely inaudible. With Sandy Bridge back on shelves, Puget sent along a custom gaming rig and just like the Serenity SPCR Edition, there's more to the Deluge Mini than meets the eye. 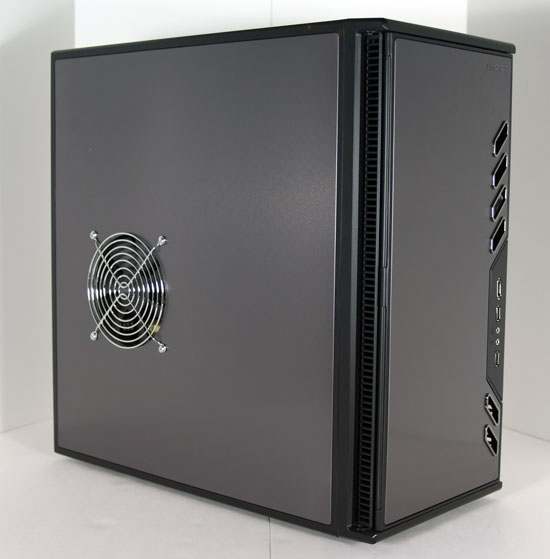 Puget Systems releases their gaming desktops under the Deluge line, and for our review they sent us a particularly intriguing entrant in the form of their Deluge Mini. While the Antec Mini P180 chassis that houses it may be built for Micro-ATX, the word "Mini" is fairly charitable. Still, it's definitely smaller than the larger tower cases we're used to seeing these gaming machines built in. As I mentioned, there's more going on with the Deluge Mini than initially appears. But before we get into the intricacies of the build, let's take a look at how our review unit was specced:

The configuration our Deluge Mini review unit shipped with makes for an interesting comparison with the Origin Genesis we recently reviewed. Both are running with Sandy Bridge processors overclocked to 4.5GHz, though Puget Systems sticks with the Intel Core i5-2500K instead of bumping up to the Core i7-2600K. For most users (and especially the gamers Puget is targeting) this isn't going to be a major issue, with the chief differentiator being the i7's support for Hyper-Threading and an extra 2MB of L3 cache. Outside of that, both machines have 8GB of Kingston DDR3 strapped to the processor (though Puget opts to go for slower DDR3-1333.)

Origin and Puget also both elected to go with two of EVGA's mildly overclocked NVIDIA GeForce GTX 560 Ti graphics cards configured in SLI. A primary but crucial difference is in how the cards are spaced: because Puget is using a smaller case and confined to the Micro-ATX form factor, the two 560 Ti's are snuggled up next to each other, while Origin's tower gives them more breathing room.

A major difference, though, is the lack of an SSD in the Deluge Mini. This is disappointing, as review units from competing boutiques have included an SSD for the data drive as a matter of course, but it's also not a dealbreaker: you can still configure your build with an Intel SSD.

Which brings us to one vital point here: if you visit the Puget Systems site to build your own machine, you'll notice that the Intel SSDs are the only options. This is reflective of one of the quirks of Puget: while most boutiques are certainly concerned about reliability to a degree and happily stand behind their builds, Puget performs extensive reliability testing of hardware on the market and collects massive amounts of data (some of which I've actually been privied to see.) As a result, if they don't feel a particular component is going to be up to par or may cause issues down the line, they simply won't offer it. That puts their comparatively meager 1-year standard parts warranty into perspective: by trying to choose the most reliable parts to begin with, they're banking on the user never having to worry about the warranty to begin with.