Coming up hot on the heels of last week’s Radeon HD 6450 launch, today NVIDIA quietly launched the GT 520, their low-end video card for the 500 series. It’s based on GF119, a GF11x GPU with no immediate analogue from GF10x series, but has already been shipping in mobile products as the GeForce GT 410M and 520M. In NVIDIA’s existing desktop lineup, it should replace the GeForce GT 220.

GF119 is largely half of a GF108 GPU, and in the process appears to be the smallest configuration possible for Fermi. In terms of functional units a single SM is attached to a single GPC, which in turn is attached to a single block of 4 ROPs and a single 64bit memory controller. Not counting the differences in clockspeeds, compared to GF108 a GF119 GPU should be half as fast in shading and geometry performance, while in any situations where the two are ROP-bound the performance drop-off should be limited to the impact of lost memory bandwidth. Speaking of which, as with GF108, GF119 is normally paired with DDR3, so with half as wide a memory bus memory bandwidth should be halved as well.

For the GT 520, the nominal clocks are 810MHz for the core and 900MHz (1.8GHz data rate) for the DDR3 memory. As with other low-end products, we wouldn’t be surprised to eventually see core clock speeds vary some. All of the cards launching today are shipping with 1GB of DDR3. And while we don’t have a card in-house to test, based on the performance of the GT 430 we’d expect performance to match if not slightly lag the Radeon HD 6450. Power consumption should also be similar; NVIDIA gives the GT 520 a TDP of 29W, while we’d expect the idle TDP to be around 10W. 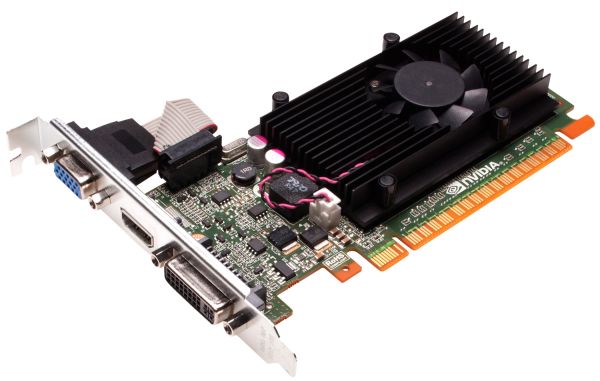 The GT 520 is shipping immediately both in retail and to OEMs; as with other low-end products the focus is on OEM sales with retail as a side-channel. NVIDIA is not providing a MSRP for the card, but we’re seeing prices start at $60. It goes without saying that performance is most certainly going to lag similarly priced cards, primarily the GT 430 which can be found for almost as cheap after rebate.