Toshiba has spent the last half a decade carving out an interesting niche as a notebook manufacturer, with many consumer-grade notebooks that are ostensibly budget offerings but often feature a markedly different look and feel from the kinds of laptops vendors like Dell, HP, and Acer produce to serve this market segment. Oftentimes they can feel stylistically behind the curve, but every so often they produce a big winner as they did with their Portege R700 series.

Now, a trickle-down of style couples with modern hardware in a respectable new entrant in their venerable Satellite line: the M645. Our review unit features a shiny new Sandy Bridge mobile dual-core processor along with a healthy amount of memory, an Optimus-enabled NVIDIA GeForce 500M series GPU, and a Blu-ray combo drive, all in a reasonable 14-inch chassis. But it threatens to set you back a grand: is it worth it? 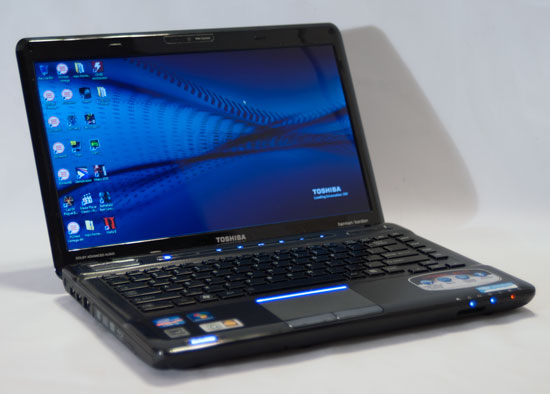 The elegantly titled M645-S4118X we have on hand for review is the most expensive unit in Toshiba's M640 line, and as you'll see from the specifications, it largely earns that. This is as decked out as Toshiba's 14-inch consumer notebooks get, featuring a lot of power and flexibility. Here's what you get:

Starting from the top we have one of Intel's midrange Sandy Bridge mobile processors, the Core i5-2410M. Like its kin it features 3MB of L3 cache along with Hyper-Threading, and depending on thermals and workload it can turbo up to 2.6GHz on two cores or 2.9GHz on one core. Its only real weak point is that its HD 3000 GPU tops out at 1200MHz instead of the 1300/1350MHz you get on some of the faster models, but given our next major component that shouldn't be a huge issue.

The M645 benefits greatly from the inclusion of the NVIDIA GeForce GT 525M with 1GB of DDR3 running at 900MHz (1.8GHz effective) and Optimus technology to maximize battery life while allowing the end user to enjoy both a decent mobile gaming GPU as well as Intel's Quick Sync hardware video encoder. Unfortunately, this is a point where the unit also falters: Toshiba runs the GT 525M at clocks well below spec. NVIDIA specifies the 525M to run the core at 600MHz (and thus the 96 CUDA cores at 1.2GHz), but Toshiba has substantially reduced its core clock to just 475MHz (reducing the CUDA cores to a paltry 950MHz). The cut is a brutal one that you'll see reduces performance below even a GeForce GT 420M.

Fortunately, all is not lost. Toshiba includes a generous 6GB of DDR3-1333, and while the 5400RPM spindle speed on the hard drive is slow, at least the 640GB of storage is copious. Better still, Toshiba also includes both a Blu-ray drive and a USB 3.0 port. The backlit keyboard is also a welcome touch, but the inexplicable lack of gigabit ethernet connectivity is troubling, and the mediocre 48Wh 6-cell battery is unfortunate.

In terms of the internal hardware, we really wind up with mixed feelings all around as Toshiba has been generous in some places while frustratingly stingy in others. At the price Toshiba is asking, some of these trade-offs just shouldn't have been made.