At CTIA Samsung mildly shocked the world by proclaiming that it would be bringing TouchWiz to its first Honeycomb tablet. Google had previously indicated that Honeycomb's UI would be unified and that hardware vendors wouldn't be skinning it, however it later backed off and said that Honeycomb was simply going to be good enough that no one would want to change it. 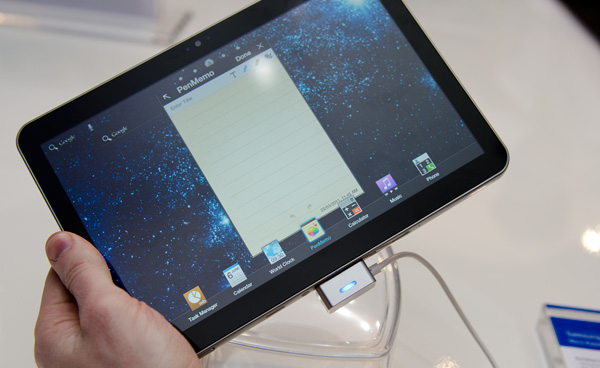 TouchWiz was originally slated to be a part of the Galaxy Tab 10.1 launch

The shipping version of the Galaxy Tab 10.1 (as well as the Limited Edition given out at Google IO) has all hints of the Honeycomb TouchWiz UI removed. There aren't even any Samsung specific widgets that come preloaded on the Galaxy Tab. I'm not sure if Google got tough with Samsung or if Samsung gave up on the idea of skinning Honeycomb after the 3.1 enhancements, but for better or for worse TouchWiz is gone. 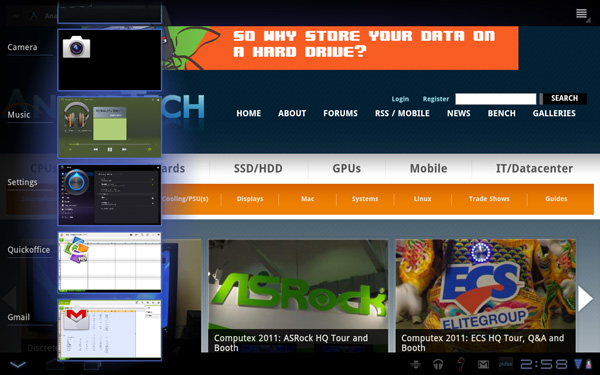 A scrollable recent apps list, a new feature of Android 3.1

One of the big features of TouchWiz on Honeycomb was supposed to be the ability to resize widgets, a feature that Google actually added in with the 3.1 update last month. The Galaxy Tab 10.1 ships with 3.1 from the factory bringing the total number of 3.1 devices up to three in the market today (ASUS' Eee Pad, Motorola Xoom and Samsung Galaxy Tab 10.1). Both the performance and feature enhancements that came along with the 3.1 update apply to the Galaxy Tab 10.1 so I won't go through them again here. If you weren't sold on Honeycomb before the update, the 3.1 bundle isn't going to be enough to make you a convert - but if you were interested in the OS beforehand, the point release makes the experience noticeably better.

Samsung opted for a more conservative default wallpaper on the 10.1 than ASUS did with the Eee Pad. It's impressive how much of an impact an animated wallpaper can have on performance. Samsung's simple switch makes the Galaxy Tab feel snappier by default. We're still a generation or two away from being able to have enough spare CPU cycles and memory bandwidth to throw away at things like frivolous UI elements. 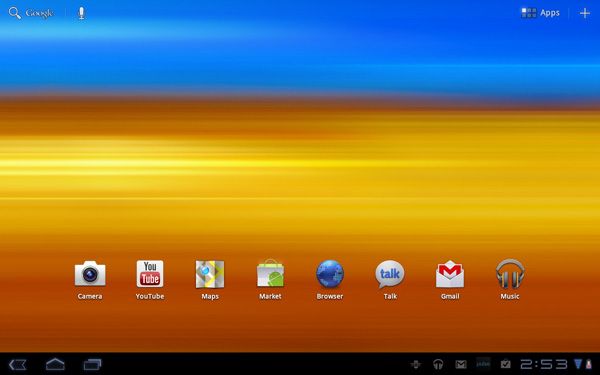 There are still some odd hiccups that bother me about Honeycomb. For example, frame rate when bringing up the apps grid is still lower in portrait mode than in landscape. I also encounter far too many crashes on a regular basis. I still believe Honeycomb is fit for sale but it's definitely not a fully polished product.

While overall UI performance is much improved with 3.1 vs 3.0.1, it's still not perfectly smooth. For doing the handful of things that tablets work very well at Honeycomb definitely gets the job done, but ask too much of it and the experience quickly breaks down into something a lot slower.

Web browsing is still mostly pleasant. While Flash support is there, Honeycomb on a Tegra 2 is still far too sluggish to deliver even a netbook like experience. The problem ultimately boils down to screen resolution and memory bandwidth. At 1280 x 800 there are simply too many pixels to run most moderately complex Flash video while maintaining any semblance of a smooth UI.

With TouchWiz gone, there's still Samsung's own set of preloaded apps that come with the Galaxy Tab 10.1.

The Music Hub is Samsung's music store powered by 7digital. Tracks sell for between $0.99 and $1.49. 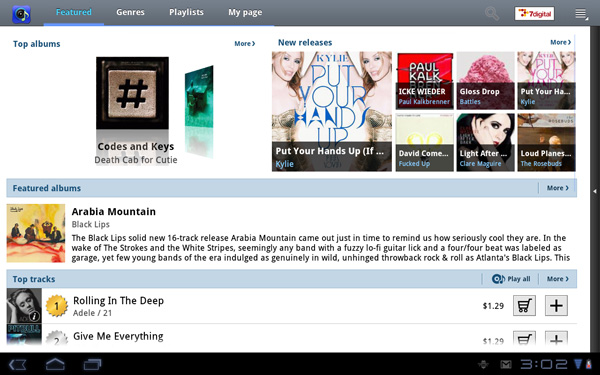 This next one is a bit odd. If you've purchased any Samsung device in the past (e.g. Samsung TV) you'll know the company is particularly fond of outfitting its hardware with its own custom app store. The Galaxy Tab 10.1 is not exempt from this treatment. The tablet comes with an app called Samsung Apps, which is a separate app store that presently has a whopping 6 titles, three of which are Angry Birds variants (Regular, Rio and Seasons). Thankfully all of the titles available in Samsung Apps, at least today, are all available free of charge. 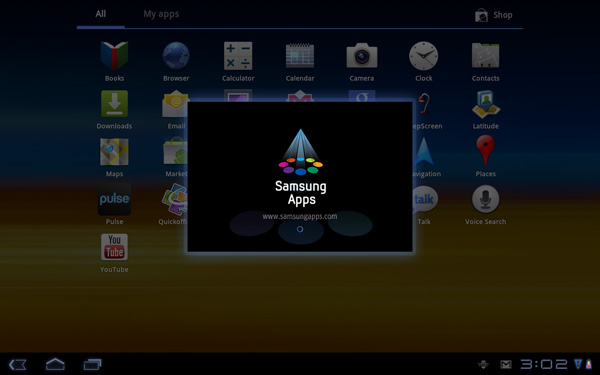 Although the titles are free they are ad supported. Note that the apps themselves aren't delivered through Market so you'll need to enable the installation of non-market apps in order to actually use any of them. 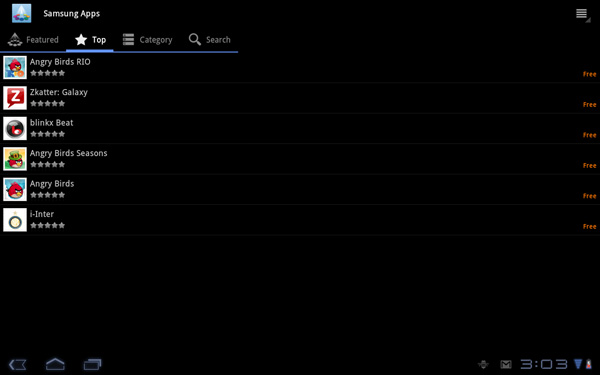 Quickoffice is a basic word processing, spreadsheet and presentation package for Android with some basic MS Office compatibility. ASUS opted for Polaris on the Eee Pad but Quickoffice seems to work just as well. 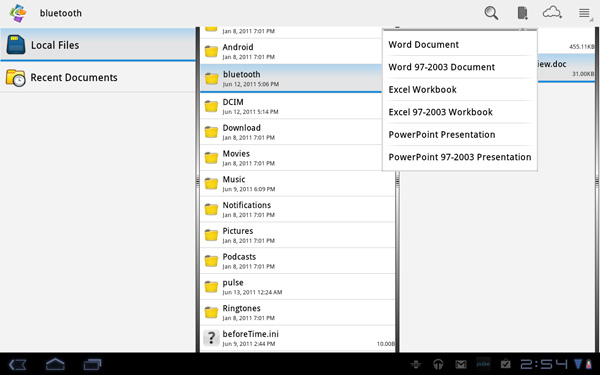 The suite has some nice features such as one-touch text-to-speech when reading a Word document. We're not quite at the point where a Honeycomb tablet could replace a netbook but we're getting there. 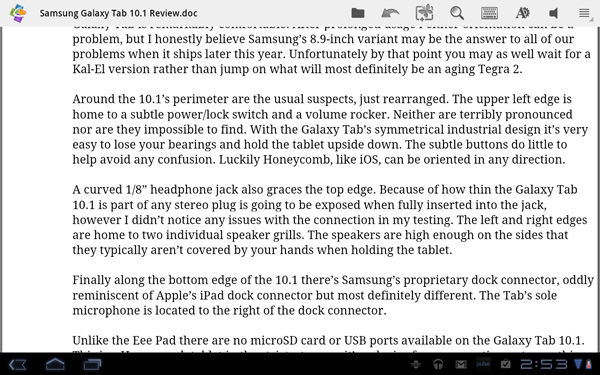 Other than formatting issues, the biggest problem I had with Quickoffice was simply performance. Try to do too much (or forget about an app running in the background) and you're left with an app that just sits there waiting for a slice of CPU time that it seems to only get after decades (in CPU time) of waiting. 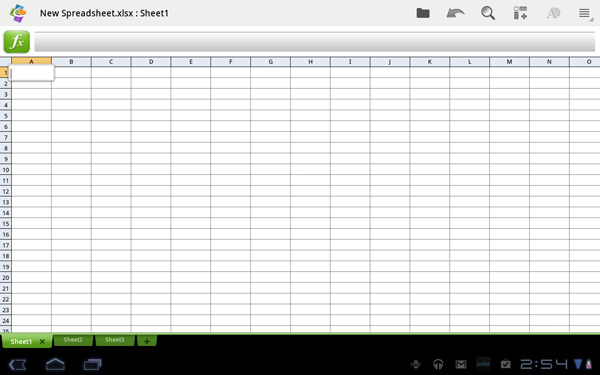 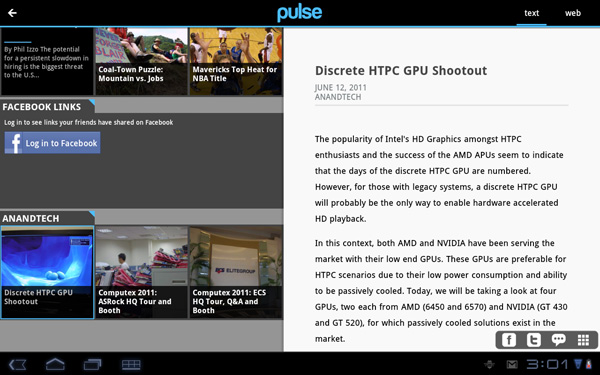 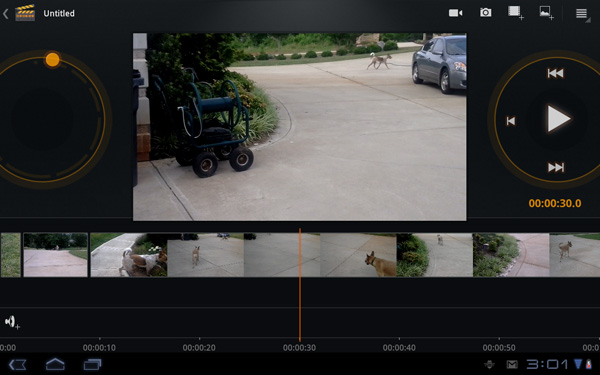 The performance complaints I mentioned above apply here to AMS as well. I had this app crash a good three times in succession while trying to edit together a simple video of footage I shot with the Galaxy Tab.

Of course there are the usual Android apps that we've covered as a part of Honeycomb (Gmail, Gtalk, Maps, Browser, etc...). 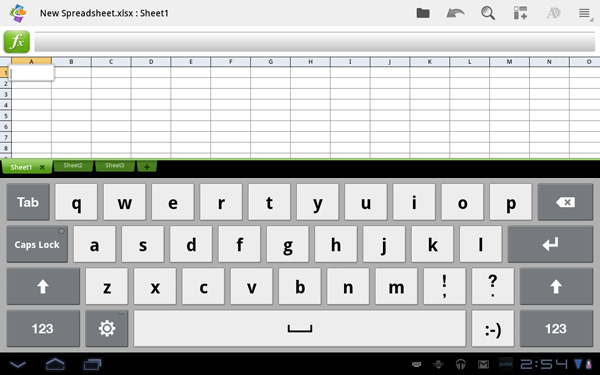 The Google supplied Honeycomb virtual keyboard is there however Samsung opts to use its own custom keyboard by default. I didn't have many complaints about Samsung's keyboard however I'm not a fan of the XT9 predictive text system Samsung's keyboard uses. I prefer the looks of the Samsung keyboard but the functionality of the stock Honeycomb offering.