The Slider's keyboard is unbelievably convenient. In the opening of this review I lamented the fact that switching between two separate devices depending on whether or not I had to do a lot of typing seemed silly. The Eee Pad Slider almost completely addresses this issue. You can relax on the couch and use the Slider as a tablet, but the moment you need to do a lot of typing you've got a full blown keyboard at your disposal.

The keyboard doubles as a convenient stand for the Slider. Unlike the iPad 2's smartcover, the Slider's stand holds the tablet significantly upright. If you're lying down on a couch you can use the Slider just as you would an ultraportable notebook or netbook. 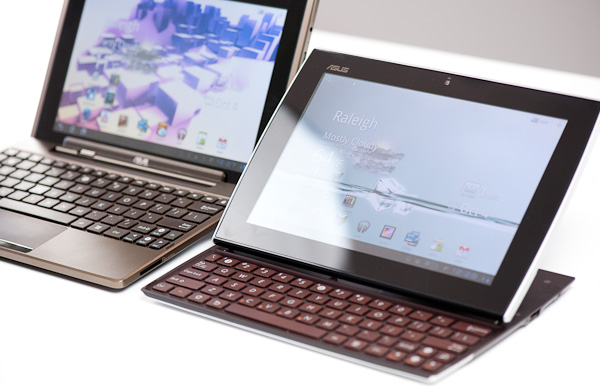 The slider mechanism doesn't work like a phone with a sliding keyboard. Instead of pushing the display up along the horizontal plane, you actually grab onto a lip at the top of the screen and pull up along the vertical plane - almost like you're opening a container rather than sliding up a smartphone display. The process is surprisingly fluid and confidence inspiring. The mechanism is spring loaded so after you've got the screen lifted up by about 15 degrees the rest goes a bit quicker. The process can be as quiet or as noisy as you want depending on how quickly you slide the screen up.

The screen is fixed at a ~45-degree angle. There's no tilting it once it's in its final resting place. For the most part the angle of the screen works well. Although I didn't spend any time on a plane with the Slider I don't anticipate someone reclining in front of you impeding your ability to use the tablet in the air.

Build quality is surprisingly good although there's obviously some movement in the slider hinge. When closed the Slider feels remarkably sturdy with little to no flex in the chassis itself. 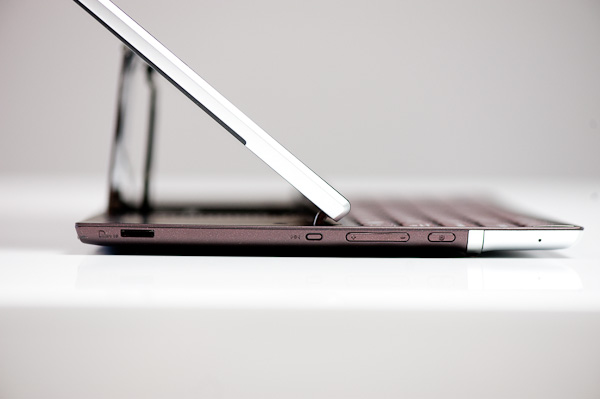 The keyboard is wired directly to and powered by the tablet. Unlike the Transformer, the keyboard doesn't contain a separate battery. The keyboard layout is very easy to get used to. There are 66 keys and nearly everything is where you'd expect to find it. There's even a cute little capslock LED on the keyboard. Just as with the Transformer, there are dedicated home, back and search keys. There is no alt-tab equivalent however, which is more of an Android limitation than an ASUS one. Unfortunately there's also no way to bring up Honeycomb's recently used apps list from the keyboard. The keys are hardly full sized, I measured 14 x 11mm compared to 16 x 16mm on Apple's chiclet keyboard. Unless you have huge fingers however the key size is a non-issue. For the editors in the audience ASUS was sure to enable function+arrow key combinations for home, end, page up and page down. All four functions work perfectly in Polaris Office.

This is still Android so there's no way to control things like key repeat rate, although you can enable/disable auto-correct and configure how aggressive the auto-correct should behave. These configuration options only apply to the virtual keyboard (which is only visible when the slider is closed), with the physical keyboard in use you get no auto-correct.

Typing quickly on the Slider's keyboard can be a problem. Unlike a traditional notebook there's no trackpad, which means there's also no wrist rest. There's also a tall lip that borders the keyboard and is taller than all of the keys, which occasionally got in the way of me hitting the space bar. The keys aren't always super responsive either. My main issue was with the space bar but occasionally I'd miss a letter here or there. Shifting my typing style to being a little more deliberate with each finger press generally addressed the problem.

If you're hoping for the quality of a high end notebook's keyboard, you will be disappointed. The Slider's keyboard is functional and it gets the job done, but set your expectations accordingly. It's not hard to get used to, but it's definitely not the best keyboard I've ever used.