Intel's Xeon E5-2600 lineup was released last Tuesday and as expected, several manufacturers have released products based on these processors. Today we are looking at Boston's offerings, which is one of the largest resellers and partners of SuperMicro (see our article on SuperMicro's Xeon E5 solutions). This means Boston does not design or manufacture the motherboards they use - they buy barebones from SuperMicro and then configure the system according to their customers' wishes. This business model is similar to iBUYPOWER's and CyberpowerPC's, for example.

The benefit of this business model is that you can concentrate pretty much all your capital on customer relations. You don't have to worry about R&D and manufacturing, as you are basically just a reseller who also assembles the system. Customers are mainly paying for your knowledge about the market and their needs. In turn, you lose total control over what you sell and are at the mercy of other companies. It's harder to be innovative when everyone has access to the parts you use. However, at least in the consumer market, products from e.g. iBUYPOWER are generally cheaper than what equivalents from Dell, HP, ASUS etc. cost, so that's definitely an advantage.

Please note that the configurations below are just options among the hundreds of different configurations that Boston offers, as all systems are built to order.

The Quattro 1264-T is definitely one of the most interesting offerings from Boston. It's based on SuperMicro's 2U Twin^2 solution, which integrates four dual-socket motherboards inside a compact 2U chassis. This means you can have up to eight CPUs in one system, and up to 64 cores when using octo-core Xeon E5 CPUs. That works out to be 1,344 cores when utilizing a standard 42U rack cabinet. We used SuperMicro's 2U Twin (two motherboards in 2U chassis) in our Xeon E5-2600 review, so head there if you want to take a deeper look at the Twin design. The advantage of Twin^2 is its density. It provides an enormous amount of processing power in a relatively small form factor, and hence is the most suitable for workloads that demand a lot CPU power (such as HPC workloads).

The Value Series 380 G8 is a more traditional dual-socket server in 2U form factor. It offers more space for expansion when compared to the Quattro due to looser board design. The Quattro supports only 128GB of RAM per CPU, while Value Series supports up to 384GB per CPU. Thus Value Series is better for memory-hungry usage, such as virtualization and database applications. 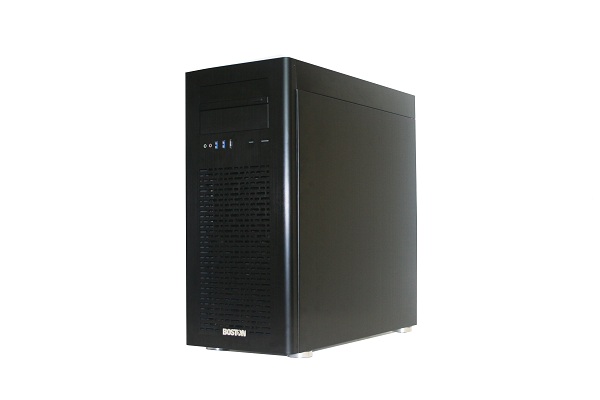 Venom 2000-7T is Boston's answer to high-end workstation users. Since it's not aimed for server use, it comes with nVidia Quadro 4000 graphics, making it ideal for media creation and other GPU-intensive workloads. There is also Crucial M4 SSD (see our review) included along with USB 3.0 ports to increase I/O performance. The operating system also changes, to standard Windows 7.

Boston appears to have a price advantage over OEMs like Dell and HP as Dell charges over $10,000 for PowerEdge R720xd with specs similar to Value Series. Dell also offers PowerEdge C6220, a solution similar to Quattro, but unfortunately Dell has not revealed its pricing yet.