Our 2012 gaming suite currently ranges in age from over two years old (Civ5) to as recent as 11 months old (Batman), with an average age of around 16 months. Hardware and games have both changed during that time, so we dug through our games folder and added a few other titles to the mix. Okay, truth be told, we actually have quite a few gaming codes from AMD and NVIDIA (as well as Guild Wars 2 from ArenaNet), and we figured a selection of games from both sides should be more or less “fair”. To that end, we’ve benchmarked eight additional games: Borderlands 2 (NVIDIA), Diablo 3 (“agnostic”), DiRT Showdown (AMD), Guild Wars 2 (“agnostic”), Max Payne 3 (NVIDIA), Sleeping Dogs (AMD), Sniper Elite V2 (AMD), and The Witcher 2 (NVIDIA). That’s three NVIDIA “TWIMTBP” (The Way It’s Meant To Be Played) games and three AMD “Gaming Evolved” titles, so overall things should be relatively even. Here’s how the two mobile GPUs stack up using the latest available drivers (NVIDIA 306.97 and an as-yet-unreleased 12.9 Hotfix from AMD), at all three of our target settings. 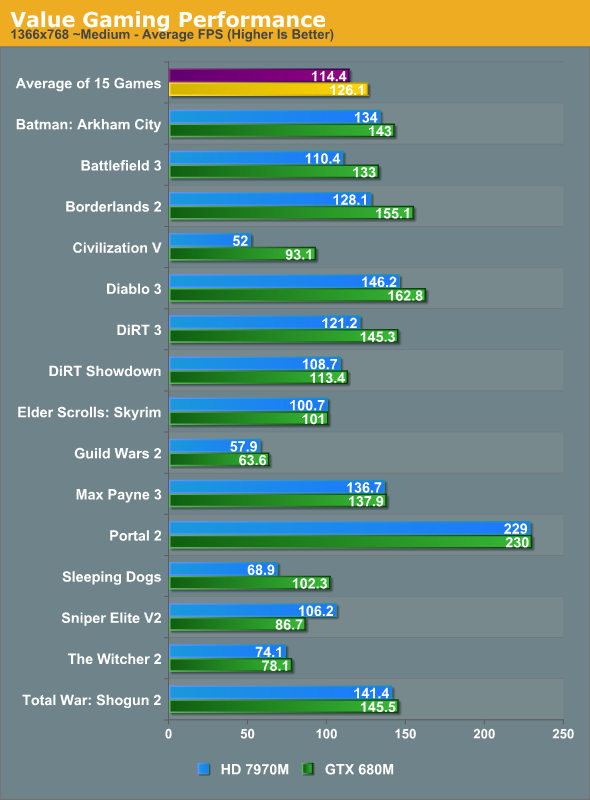 Not surprisingly, the two GPUs are closest in performance at our Value settings—the CPU becomes more of a bottleneck as we reduce the resolution and details. NVIDIA nearly sweeps the list of games, with Sniper Elite V2 being the sole game where AMD comes out ahead (by a relatively large 22% margin). By the numbers, NVIDIA has a 10% lead in Diablo 3 and Guild Wars 2; a 20% lead in Battlefield 3, Borderlands 2, and DiRT 3; a 50% lead in Sleeping Dogs; and an 80% lead in Civilization V. The remaining seven titles are around 5% or less margin of victory, so they’re basically tied. Overall, NVIDIA ends up with a 10% average performance lead over AMD. 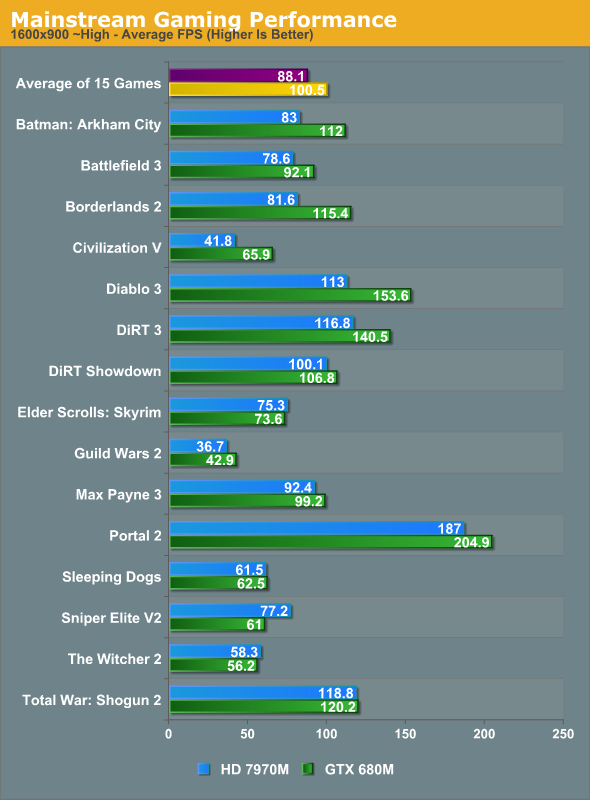 When we move up to our Mainstream settings, the above pattern basically continues. NVIDIA’s overall advantage grows to 14%, with significant leads of 15% or more in Batman: Arkham City, Battlefield 3, Borderlands 2, Civilization V, Diablo 3, DiRT 3, and Guild Wars 2. AMD’s sole major lead continues to be Sniper Elite V2, though they also take a very slight lead in Skyrim and The Witcher 2. If we set the margin to beat at 15%, NVIDIA has seven wins, AMD gets one, and the remaining seven titles are “tied” (within 10%). 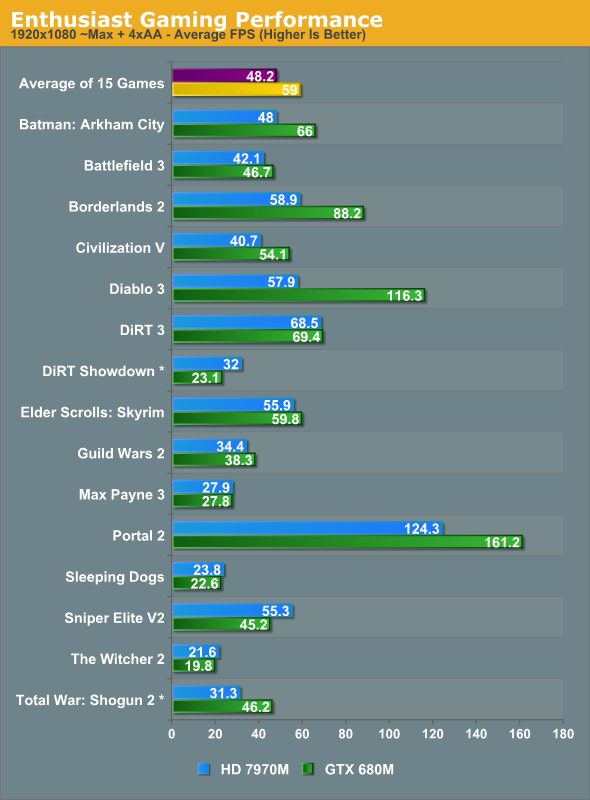 At our maximum detail settings, NVIDIA’s average margin of victory increases yet again, this time to 22%. Considering these are the settings most likely to be used with high-end gaming notebooks, the win here is the most meaningful. In terms of ties, there are seven games that are under the 15% margin (Battlefield 3, DiRT 3, Skyrim, Guild Wars 2, Max Payne 3, Sleeping Dogs, and The Witcher 2). Somewhat interesting however is that AMD now manages to come away with four moderate to major wins: DiRT Showdown is a 39% lead and Sniper Elite V2 is a 22% lead for AMD while Sleeping Dogs is a small 5% lead and The Witcher 2 is a 9% lead. The bad news for AMD is that of the remaining titles, NVIDIA comes away with resounding victories in many of them: 38% in Batman, 50% in Borderlands 2 (with the option to enable PhysX still available), 33% in Civilization V, 30% in Portal 2, 48% in Shogun 2, and a resounding 100% lead in Diablo 3.

At the end of the day, however, it’s not just about performance. In the desktop world of gaming PCs, we generally aim for 60FPS or higher as the level we want to reach in order for a game to run “smoothly”. On notebooks, we can’t be quite so demanding, so we have to settle for 30FPS in many cases. Out of our 15 games, at our Enthusiast settings we end up with several that don’t make it into the “playable” range: DiRT Showdown tanks when Global Lighting is enabled, but more so on NVIDIA than on AMD—the 7970M squeaks by with 32FPS while the 680M falls to an unplayable 23FPS. That’s the only title where we’d give one card a pass while the other falls short, but Max Payne 3, Sleeping Dogs, and The Witcher 2 are all too demanding to break 30FPS averages on either GPU. In most cases, dropping the detail settings down a notch (and/or disabling 4xAA—which basically cuts Max Payne 3 performance in half) will fix the problem, but if you were hoping a $2000 gaming notebook would simply take on all contenders without batting a shader core you’re going to be disappointed.

There are also a couple of issues with drivers to report, which we’ve marked with asterisks in the Enthusiast chart. DiRT Showdown refuses to run at 1920x1080 on the 7970M (with the Hotfix drivers), but it works in windowed mode—we tested the 680M in windowed mode as well and found that performance was about 15% lower than in full screen mode, but since this is a driver failure on AMD’s part what we used the higher result for the GTX 680M. (A quick test at 1680x1050 Ultra settings corroborates the margin of victory, regardless.) Second, Shogun 2 as noted earlier refuses to allow the Very High setting on the 7970M, so we tested both GPUs with identical “nearly maxed out” settings, where we used the “High” preset but then enabled all of the extras like Ambient Occlusion, Soft Shadows, etc. And a final note is that both DiRT Showdown and Sniper Elite V2 would crash to the desktop any time we tried to change the resolution within the game on the 7970M; we had to resort to modifying the configuration files directly to set the appropriate resolution.

Overall, NVIDIA clearly wins the performance crown, but we have to wonder how much of this is due to the hardware and how much might be coming from the drivers and developer relations. It’s not too surprising that AMD’s best results are in titles where they’ve apparently lent a hand (DiRT Showdown, Sniper Elite V2, and to a lesser degree Sleeping Dogs), and likewise NVIDIA gets some staggering leads in some of “their” titles. Also of note is that certain older games that were once AMD titles (e.g. Civilization V) now end up running better on NVIDIA GPUs. Is NVIDIA working with the developers after the fact, or optimizing their drivers, or perhaps a little of both? We can’t say for certain, but I do know that I’ve played a lot more games with NVIDIA logos during the boot sequence than games with AMD logos. Developer relations really are key, and titles like Borderlands 2 and Batman are popular offerings that shipped with PhysX support—yet another card in NVIDIA’s hand.