I'm keen to go ahead and get this out of the way now: despite being at least called the Rosewill Illuminated Gaming Keyboard, there's very little here beyond a selected backlighting toggle that recommends this keyboard for gamers. That doesn't make it a bad keyboard, but you should have your expectations in order beforehand.

With all that in mind, I'm pleased to report that Rosewill's Illuminated Gaming Keyboard at the very least continues Rosewill's trend of producing simple, attractive keyboards. Though I'm still very much in love with the style and design of the Corsair K90, I still appreciate the basic, functional design of the Illuminated Gaming Keyboard. More importantly, too, is now I can evaluate the Cherry MX Brown switches on a level playing field. Logitech included them in their G710+, but modified them to reduce noise. With the RK-9100BR in hand, I can tell you there's a definite difference. 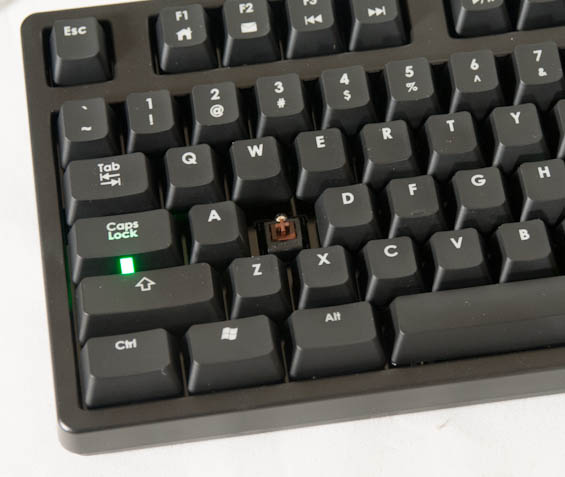 As with other mechanical keyboards, Rosewill uses individual blue LEDs behind each keycap to backlight it, giving them control over which keys are illuminated. As a result, they include a toggle that allows you to switch between illuminating the entire keyboard, just the WASD cluster and arrows, everything but the number pad, or even killing the backlighting entirely (except for the Lock keys, which have green LEDs behind them to indicate their status.) 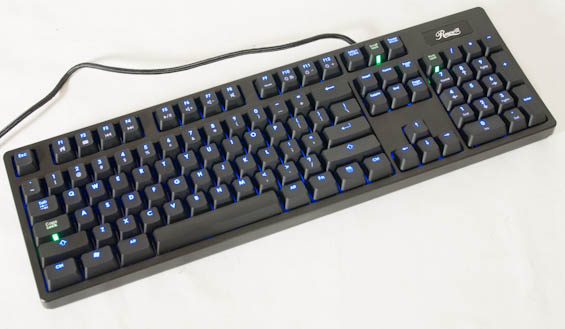 The RK-9100BR is bright at its highest setting, but thankfully there are also four levels of brightness to choose between. Note that these toggles are all handled by an Fn key that replaces the right-hand Windows key and the function keys at the top of the keyboard. As with everything else, it's an elegant, simple solution. In addition to the toggles, there are volume controls, playback controls, and home and mail shortcut keys, all mapped to F1-F12.

In terms of build, Rosewill wasn't able to offer PS/2 connectivity like they do with their lesser models; the RK-9100 and RK-9100BR require two USB 2.0 leads, one for the keyboard itself and the other for power. In exchange, though, you do get two USB 2.0 ports on the back of the keyboard, behind the number pad. The shell of the keyboard is basic rigid black plastic, and the keys employ a black soft-touch paint coating that's very comfortable to the touch. The USB cable itself is braided and of high quality.

Before even testing it, I only have two major complaints: the green LEDs used for the Lock keys are just as bright if not even brighter than the blue backlights, and unfortunately these can't be turned down or off without actually just disabling those keys. That's a minor quibble. The other is the price; the RK-9100 with MX Blue switches is $119, and the RK-9100BR with MX Brown switches is $129, and that's just plain uncompetitive. This is surprising considered Rosewill is typically a value brand, and given the minimal frills with the RK-9100's design, I think we're at least $30 over where we need to be. There are feature-rich monsters from Thermaltake and Corsair that sell for less and feature arguably superior gaming switches in the Cherry MX Reds and Blacks.